"Give the reader something he's interested in,
and he'll give you his interest in return,"

Sandra Karl, editor of "DDB News", asks Len Sirowitz some questions about the influences on his career, ad-making, and what advice he has for young art directors.

Mr.Sirowitz (Interrupting) No. Actually,
Better Vision's purpose was to sell eyeglasses.
Mobil's purpose was to create good will which in the long run has to sell some gas, too.
We just did it in a different way.
In both campaigns, we gave the reader a service.
We did something for him.
We gave him something and he responded.
In fact, every good campaign besides having the shortrange purpose of selling the product should have a long-range institutional effect for the advertiser.
Give the reader something he's interested in and he will give you his interest in return.
If you show you care about people, people will care about you.

Q. Some of the outstanding campaigns you've done, such as Mobil and Better Vision sell more than a product.
Better Vision sells having your eyesight checked and the Mobil campaign sells the concept of safety on the road ... 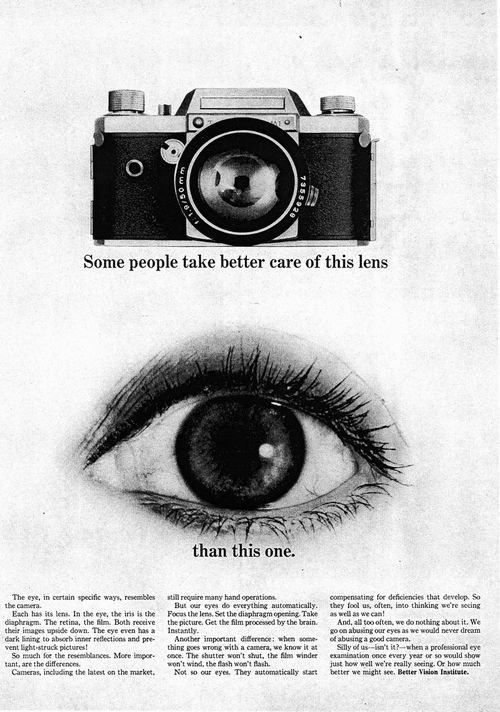 Some people take better care of this lens

The eye, in certain specific ways, resembles the camera.
Each has its lens. In the eye, the iris is the diaphragm. The retina, the film. Both receive their images upside down. The eye even has a dark lining to absorb inner reflections and prevent light-struck pictures!
So much for the resemblances. More important, are the differences.
Cameras, including the latest on the market, still require many handoperations.
But our eyes do everything automatically. Focus the lens. Set the diaphragm opening. Take the picture. Get the film processed by the brain. Instantly.
Another important difference: when something goes wrong with a camera, we know it at once. The shutter won't shut, the fihn winder won't wind, the flash won't flash.
Not so our eyes. They automatically start compensating for deficiencies that develop. So they fool us, often, into thinking we're seeing as well as we can!
And, all too often, we do nothing about it. We go on abusing our eyes as we would never dream. of abusing a good camera.
Silly of us-isn't it?-when a professional eye examination once every year or so would show just how well we're really seeing. Or how much better we might see. Better Vision Institute. 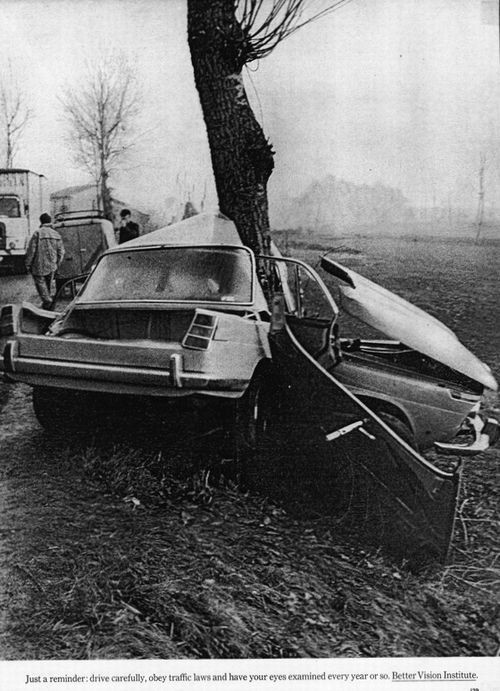 Just a reminder: drive carefully, obey traffic laws and have your eyes examined every year or so.
Better Vision Institute