About four years ago, or better yet, 60 Better Vision Ads account came into DDB.
I felt by instinct that this account had exciting potential.
It had been with another advertising agency for about six years and had been advertising for ten years before that.
Nothing exciting had ever been done with the account.
But there it was.
When I heard the account had come into the agency I quickly asked to work on it.
I went to Bob Gage and, I said, "Bob, there's a great account coming in that I'd like to work on-it's called "Better Vision Institute."
Bob said, "What's that? I never heard of it." (This was after 15 years of spending money on advertising.)
I said, "just let me work on it". He said okay. I was assigned to it as Art Director and Leon Meadow was the copy writer.
Leon and I have done every BVI ad since.
We went over to the Better Vision Institute and spoke with their people.
We found out all about their problems.
We learned everything there was to know about what makes up the Better Vision Institute.
We were very surprised to learn, and I'm sure you will be too, that BVI as we call it, is a profit-making organization.
The Institute is made up of the Optical Lense manufacturers (primarily Bausch & Laumb and the American Optical Co.), Eyeglass Frame manufacturers, Opticians and Optometrists.
They pool their money into the Institute in order to increase eyeglass sale in the United States.
This is a fine example of cooperative advertising.
The budget is not very much.
It spends less than one million dollars a year. When it came into the agency it started at 600 thousand and it's still only 800 thousandnow.
In the U. S. that's a small account.

We came to the conclusion that we must never sell the eyeglasses, the frames or the examinations directly.
We felt that through a public service campaign-one that was truly in the interest of the public, our dollars could be put to best use.
Which becomes our interest.
We have never deviated from this premise, in spite of requests.
Right from the beginning we felt that the best way to get people to have their eyes examined is to make them aware of their eyes, to make them aware of the importance of their eyes.
Sometimes through fear, yes, but primarily through an interest in taking care of one of their most precious senses.
So then we began.

The ads I'm gping to show you represent not all, probably about half of all of the Better Vision Institute ads that have run.

I'm very proud to say that since the campaign began eyeglass sales in the U. S. have increased by over 33%.
We attribute this to an improvement in eyeglass styling (which we learned from the Europeans) and our BVI advertisin career. 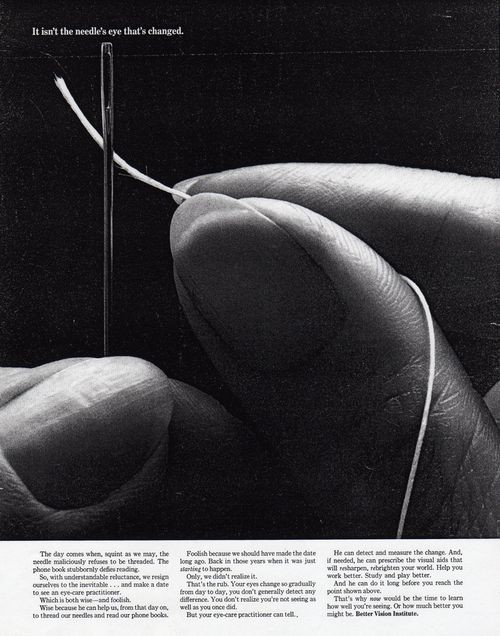 The day comes when, squint as we may, the needle maliciously refuses to be threaded. The phone book stubbornly defies reading.
So, with understandable reluctance, we resign ourselves to the inevitable ... and make a date to see an eye-care practitioner.
Which is both wise-and foolish.
Wise because he can help us, from that day on, to thread our needles and read our phone books.
Foolish because we should have made the date long ago.
Back in those years when it was just starting to happen.
Only, we didn't realize it.
That's the rub. Your eyes change so gradually from day to day, you don't generally detect any difference.
You don't realize you're not seeing as well as you once did.
But your eye-care practitioner can tell.

He can detect and measure the change.
And, if needed, he can prescribe the visual aids that will resharpen, rebrighten your world.
Help you work better. Study and play better.
And he can do it long before you reach the point shown above.
That's why now would be the time to learn how well you're seeing. Or how much better you might be. Better Vision Institute 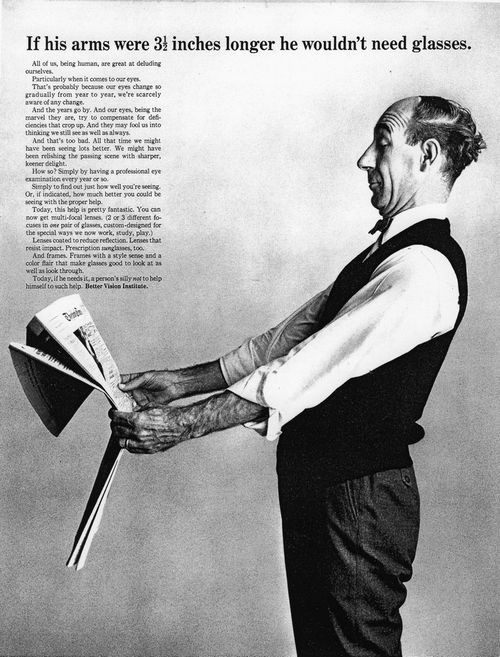 If his arms were ３1/2 inches longer he wouldn't need glasses.

All of us, being human, are great at deluding ourselves.
Particularly when it comes to our eyes.
That's probably becaus our eyes change so gradually from year to year, we're scarcely aware ofany change.
And the years go by. And our eyes, being the marvel they are, try to compensate for deficienies that crop up. And they many fool us into thinking.we still see as well as always.
And that's too bad. All that time we might have been seeing lots better. We might have been relishing the passing scene with sharprt, keener delight.

How so? Simply by having a professional eye examnation every year or so.
Simply to find out just how well you're seeing. Or, if indicated, how much better you're could be seeing with the proper help.
Today, this help is pretty dantastic. You can now get mulyi-focal lenses.(2 or 3 different focuses one pair og
grasses, custum-designed for the special ways we now work, study, play.)
Lenses coated to reduce reflection. Lenses that resist impact. Precription sunglasses, too.
And frames. Frames with a style sense and a color flair that make glasses good to look at as well as look through.
Tod\ay, if he need it, a person's silly not to help himself to such help.Better Vision Institute.