chuukyuu Is it a recent fashion that a talented copywriter gets together with a talented art director and they open up their own agency like you did with Mr. Scali?
Mr.McCabe Yes, it is. And mostly because of the current emphasis on creative work. When we opened our agency, we placed the same emphasison good creative work. But we were realistic enough to know that fads come and go in advertising. I'm not saying that good creative work is a fad, but there will come a time when clients will be as concerned with good media as they currently are with good creative work. We wanted to be in a position to have our strengths in all areas of advertising. Not just the one.

The series of advertising that recieved Gold Medal prize for the 57th N.Y.ADC(1974) One Show 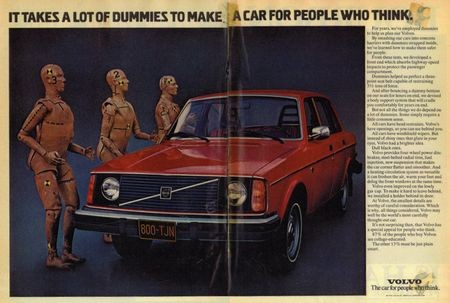 IT TAKES A LOT OF DUMMIES TO MAKE A CAR FOR PEOPLE WHO THINK.

For years, we've employed du'mmies to help us plan our Volvos.
By smashing our cars into concrete barriers with dummies strapped inside, we've learned how to make them safer for people.
From these tests, we developed a front end which absorbs highway-speed impacts to protect the passenger compartment.
Dummies helped us perfect a threepoint seat belt capable of restraining. 3.5 tons of force.
And after bouncing a dummy bottom on our seats for hours on end, we devised a body support system that will cradle you comfortably for years on end.
But not all the things we do depend on, a lot of dummies. Some simply require a little common sense.
All cars have head restraints. Volvo's have openings, so you can see behind you.
All cars have windshield wipers. But' instead of shiny ones that glare in your eyes, Volvo had a brighter idea.
Dun black ones.
Volvo provides four-wheel power disc brakes, steel-belted radial tires, fuel injection, new suspension that makes the car corner flatter and smoother. And a heating-circulation system so versatile it can freshen the air, warm your feet and defog the front windows at the same time.
Volvo even improved on the lowly gas cap. To make it hard to leave behind, we installed a holder behind its door.
At Volvo, the smallest detal sare worthy of careful consideration. Which is why, all things considered, Volvo may well be the world's most carefully thought-out car.
It's not surprising then, that Volvo has a special appeal for people who think.
87% of the people who buy Volvos are college-educated.
The other 13% must be just plain smart.

VOLVO
The car for people who think.