What is the secret of Bob Gage's talent?
Jack Gilford, who stars in Bob's commercials for Cracker Jack, thinks he has discovered it.
"It is that Bob is pigeon-toed. Pigeontoed people can't walk fast. They plod. And they get things done. My advice to any bright young art director who wants to be a big success in this business is this, go have a pigeon-toe transplant."

Gilford was Emcee at a "Salute to Bob Gage" luncheon, an event that was part of the American Television and Radio Commercials Festival on May 19 at Philharmonic Hall.
It was the fIrst time that the Festival had ever held a salute lunch for an individual.
But then it was also the fIrst time as far as anyone could remember that an art director won the Festival CLIO award for Best Film Direction.
Bob won for Alka-Seltzer's "Groom's First Meal," which he both art directed and film directed.

Next Phyllis Robinson revealed what Bob is really like.
"He's a terrible noodge," she disclosed.
"He picks on copy. He asks, 'Is it good enough? Is it surprising? Has someone done it before? Have WE done it before ?'
"Every time we sit down to a new job, he'll say, 'Well kid, we're gonna kill them this time.' And I think, 'Oh God, I can't stand this enthusiasm.' But eventually I start getting excited too as we work out something that seems terrific. We finally decide, 'This is it. Right on the button. We did it again. We're definitely going to kill them.'
"Then, the next day, Bob comes back and says, 'I don't think it's good enough.'
"And when finally we get something he does think is good enough and we go into production, then it's pick, pick, pick all the way.
"The result of all the noodging is that Bob makes us all look good," said Phyllis.
And then there is something else about him.
"Bob has the courage to keep questioning everything around him. WHY does it have to be done that way? Because it always has been? WHY shouldn't we try it another way?"

Finally Bob got a turn at the mike.
He had never put a reel of his own commercials together before the Festival asked him to do so for this day, he noted.
"I guess I was fairly confident I wouldn't lose my job at DDB. Or maybe it's just that I never had time."
He felt his old commercials were somewhat less good as pieces on film than he had remembered
them. "
But I wasn't surprised that they stood up as strong, simple advertising messages," he added.
For from the beginning at DDB the first requirement for a commercial spot was that it be noticed, that it be made entertaining enough to get and hold attention. "But the best spots," said Bob,
"have always had a new idea that involves basic human emotions."

Other Gage-isms:
"A spot is like molasses - you have to stirit up all the way or it starts to harden, and then you're dead."
"I've always thought it's bad to have something too well planned."
"Experience has taught me that you can take a bomb and make it an awardwinner with good editing."
"I've always been a do-it-yourselfer, and so I have always felt secure when doing a job."
In addition to the CLIO for Best Film Direction he received at the luncheon, two of his commercials ("Groom's First Meal" and Cracker Jack's "Attic") received CLIO's for being best in their categories at the Festival ceremonies that night. 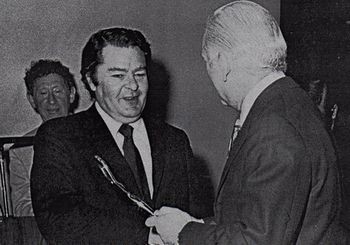