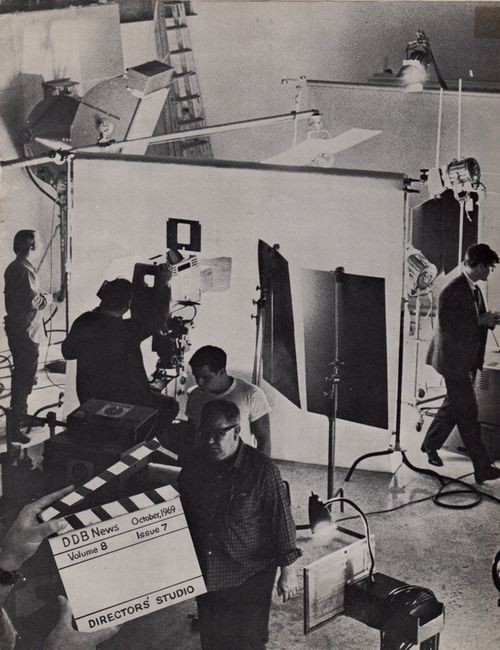 "DDB NEWS" on October issue, 1969
The Ultimate in Creative Freedom

"The ultimate in creative freedom-that's what Directors' Studio is all about."
Ingredients?
"One of the finest, best equipped studio facilities in New York City,
"An agency with the best conceptual ideas in the city,"
”And then letting the agency's creative team choose the best people in New York City to interpret those ideas to film."
And what makes best?
"It's the chemistry that exists between people who work together."
Directors' Studio General Manager Hugh Branigan is speaking.

And he has reason to be jubilant.
Since opening for business less than four months ago, 'Branigan's Bunch' has turned out more than 60 commercials-and has been equally successful in renting the studio to outside production companies.
("We don't solicit," says Branigan, "but when you've got a good thing going, it gets around by word of mouth.")

What about the possibility of creative leaks to DDB when other companies shoot on our stages?
What assurance can we offer of security for their products and ideas? " Aside from our own integrity, we can close the set completely to their own crew,"states Branigan, "but actually we're not so much interested in renting the studio to outside companies as we are in having our own people use it.
If we produce just one-third of Doyle Dane Bernbach's commercials, we won't have room for anyone else."
So to acquaint DDBers with the new facility, Directors' Studio held its first open house last month.
And for one week of lunchtimes DDB's art directors, copywriters, and TV producers had a chance to eat, drink, ask questions, laugh and be merry-AND tour the new studio.
What they saw was a full-operating, four-story, two-stage studio complex, complete with recording, mixing, editing, screening, and storage facilities. (GiIlette and AIka-Seltzer commercials were being shot that week, and the Beautiful People were out doing some Clairol inserts.)
The studio also has its own carpentry shop for on-the-spot set construction, specially designed make-up rooms equipped with stage-matched lighting, and kitchenskitchens and bathrooms on every floor.
Studio services include coffee and meals served directly on the set.
And, as new Production Chief Bob Miller points out, the studio is set up so that crews can shoot sync sound with the air conditioning running-a rather unique asset in studio production.
"People enjoy working here," he adds, "because it's a friendly place, and customers are treated not as if it's a house production company, but as they would be in any other studio."
Some of the account people who heard about the goings-on over at West 45th Street felt a bit left out.
For them, Branigan plans another week-long open house "soon." But "right now he and Bob Miller are involved up to their ears not only in producing
commercials, but in handling the numerous inquiries that keep coming in from feature film companies interested in renting the studio" ("We haven't put out any feelers," says Branigan.
"Honestly. People just call up and ask. There's great excitement about the studio ... it's become the talk of the town!")
And Branigan intends to keep it that way.
How? "We're going to turn out the best commercials in town," he says-lithe highest technical quality, the most outstanding talent, AND the lowest
production costs in New York City!" 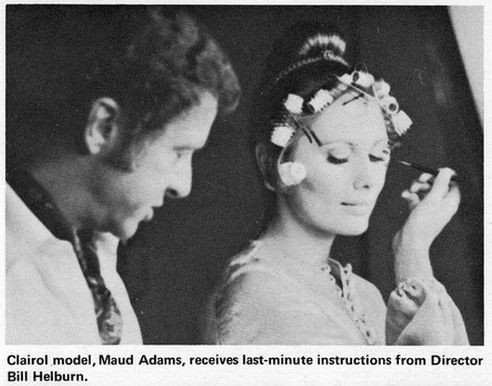 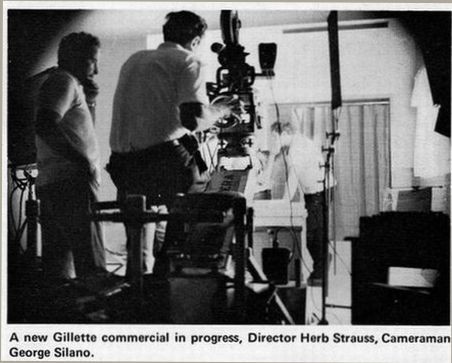