About four years ago, Bill Bernbach came to me and said, "Len, I've got a great assignment for you. It's one of the most important assignments I could give to anyone." I thought it was a great new account that had just come into the agency. I thought this was going to be an exciting thing for me. I'm going to be able to style a campaign, create brand new idea that have never been done before. He said, "Len, I want you to take over from Helmut Krone on the Volkswagen campaign." Helmut, as you know, had been the guiding light behind the Volkswagen campaign. It was the most talked about campaign inside and outside the advertising industry. You couldn't go to a cocktail party without hearing people talk about VW advertising. It was a thrilling thing to hear -- until I learned that I would now have to carry the ball.

I would have to continue the greatness of the campaign.This was one of the most terrifying experiences in my career. What was I to do? Was I to come into the account and foolishly make changes? Change for the sake of change? Prove my individuality at the expense of the account and the agency? No, that was wrong. What was I supposed to do? Copy Helmut Krone? Work like Helmut Krone? No, that was wrong too. I had to find an area that made it appear as if the account had never changed hands yet it was me, not Helmut Krone. Helmut works one way. I work another. I began.

The ads you are going to see are an example of my work done with copy writer Bob Levenson and a few others. I worked on VW for 3 1/2years as a working art director and supervisor. Last year, just supervising. 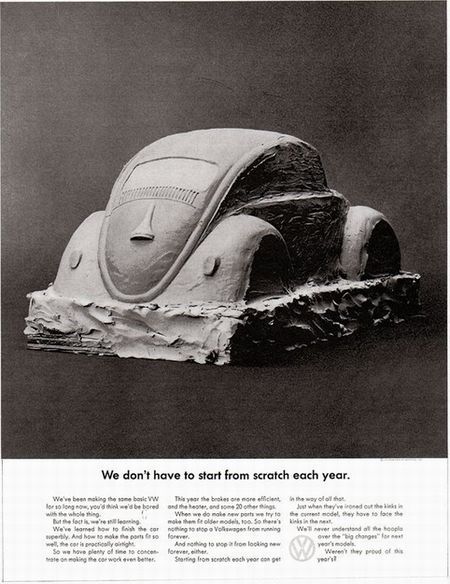 We don't have to start from scratch each year.

We've been making the same basic VW for so long now, you'd think we'd be bored with the whole thing.
But the fact is, we're still learning.
We've learned how to finish the car superbly. And how to make the parts fit so well, the car is practically airtight.
So we have plenty of time to concentrate on making the car work even better.
This year the brakes are more efficient, and the heater, and some 20 other things.
When we do make new parts we try to make them fit older models, too. So there's nothing to stop a Volkswagen from running forever.
And nothing to stop it from looking new forever, either.
Starting from scratch each year can get in the way of all that.
Just when they've ironed out the kinks in the current model, they have to face the kinks in the next.
We'll never understand all the hoopla over the "big changes" for next year's models.
Weren't they proud of this year's? 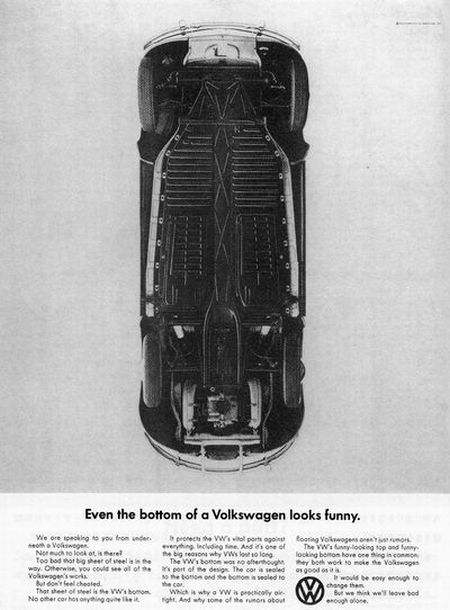 Even the bottom of a Volkswagen looks funny.

We are speaking to you under-neath a Volkswagen.
Not much to look at, is there?
Too bad that big seet of steel is in the way. Otherwise, you could see all of the Volkswagen's works.
But don't feel cheated.
That seet of steel is the VW's bottom. No other car has anything quite like it.
It protects the VW's vital parts against everything. Including time. And it's one of the big reasons why VW'slast so long.
The VW's bottom was no afterthought. It's a part of design. The car is sealed to the bottom and the bottom is sealed to the car.
Which is why a VW is practically air-tight. And why some of the rumors about floating Volkswagens aren't just rumors.
The VW's funny-looking top and funny-looking bottom have one thing common: they both work to make the Volkswagenas good as it is.
It would be easy enough to change them.
But we think we'll leave bad enough alone. 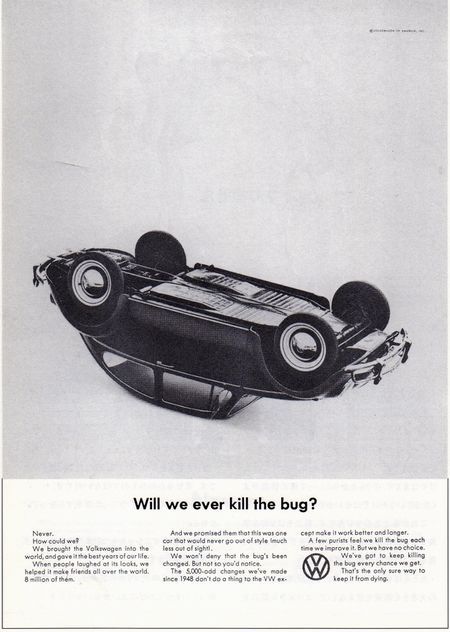 Will we ever kill the bug？

Never.
How could we?
We brought the Volkswagen into world, and gave it the best years of our life.
When people laughed of its looks, we helped it make friends all over the world. 8 million of them.
And we promised them that this was one car that would never go out of style（much less out of sight）.
We won’t deny that the bug's been changed. But not so you’d notice.
The 5,000-odd changes we've made since 1948 don’t do a thing to the VW except make it work better and longer.
A few purists feel we kill the bug each time we improve it. But we have no choice.
We've got to keep killing the bug every .chance we get.
That's the only sure way to keep it from dying. 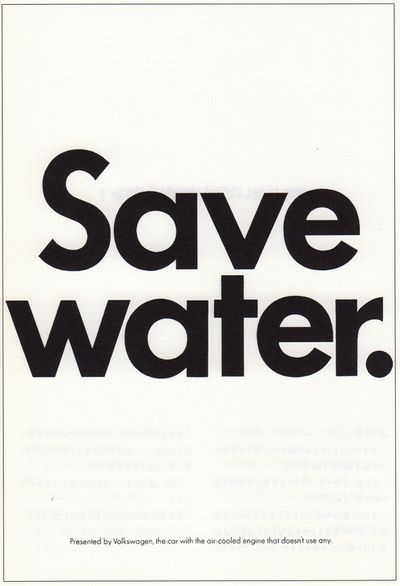 Presented by Wolkswagen the car with the air cooled engine that doesn't any.