At November 1974 issue 'DDB NEWS', spread are appropriated for Helmut clone's one-man show who isone of signboards A/D of DDB.Talking about the great achievement by page 2 of opening wide from knitting work collections of the large sizes on page 268 entitled 'Helmut creative revolution' after drinking ..the death.. is impossible space.

"I'm a designer by trade. I can't wait for the concept to happen and the writer to get out of my room so I can start on the treatment. I have
enormous fun with the tools of my trade film type, photostats, acetates, color swatches, lenses, optical benches ...

"I don't completely reject McLuhan any more. The medium is at least as important as the idea.
If it's print, let's see some exciting printing, if it's film let's see it move. While an idea can be valuable, it sometimes runs away with a commercial and keeps it from being exciting.

"We are not in the business of getting ideas. We are in the business of selling products to people. And what we produce should add up to a piece of salesmanship. The way a salesman looks, behaves and smiles is just as important as what he says. He is the medium and at least half the message.

"The thing we seem to forget is that the naked, skimpy look with the devastating two-word headline was different in its time. Less was more. But now less is less. Our job is not to sit together in an office, get an 'idea' and then go home. Our job is to motivate sales and that involves music, photography, creative editing, color and everything else at our disposal.

"I like to tell a friend at another agency that I can sell more cars with the color pink than he can with all of his selling propositions." 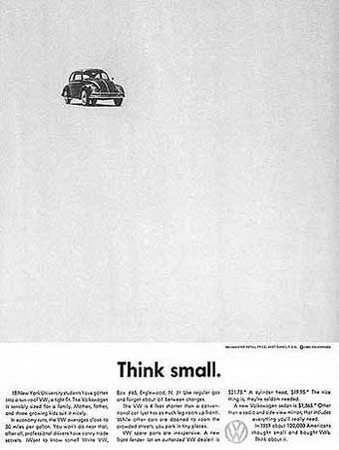 Our little car isn't so much of a novelty any more.
A couple of dozen college kids don't try to squeeze inside it.
The guy at the gas station doesn't ask where the gas goes.
Nobody even stares at our shape.
In fact, some people who drive our little fliver don't even think 32 miles to the gallon is going any great guns.
Or using five pints of oil instead of five quarts.
Or never needing anti-freeze.
Or racking up 40,000 miles on a set of tires.
That's because once you get used to some of our economies, you don't even think about them any more.
Except when you squeeze into a small parking spot. Or renew your small insurance.
Or pay a small repair bill. Or trade in your old ＶＷ for a new one.
Think it over. 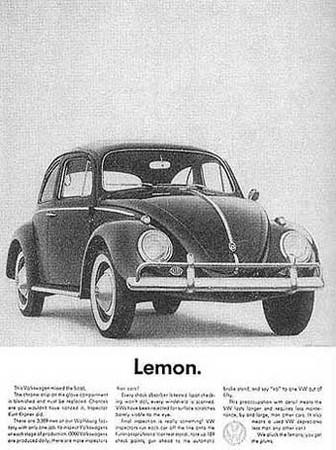 This Volkswagen missed the boat.
The chrome strip on the glove compartment is blemished and must be replaced. Chances are you wouldn't have noticed it; Inspector Kurt Kroner did.
There are 3,389 men at our Wolfsburg factory with only one job: to inspect Volkswagens at each stage of production. (3000 Volkswagens are produced daily; there are more inspectors than cars.)
Every shock absorber is tested (spot checking won't do), every windshield is scanned.
VWs have been rejected for surface scratches barely visible to the eye.
Final inspection is really something! VW inspectors run each car off the line onto the Funktionsprufstand (car test stand), tote up 189 check points, gun ahead to the automatic brake stand, and say "no" to one VW out of fifty.
This preoccupation with detail means the VW lasts longer and requires less maintenance, by and large, than other cars. (It also means a used VW depreciates less than any other car.)
We pluck the lemons; you get the plums. 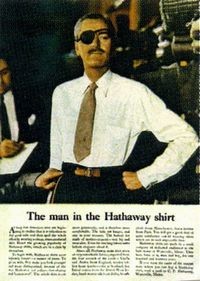 'The VW page, 2/3picture, a small headline under it and then three blocks of copy, was entirely influenced by Ogilvy,' wrote Krone.

'The space break-up existed before. It was really Ogilvy that was doing it a great deal and I always admired that man - but I did change a lot about it. 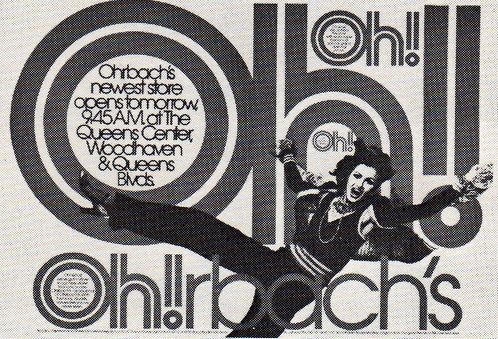 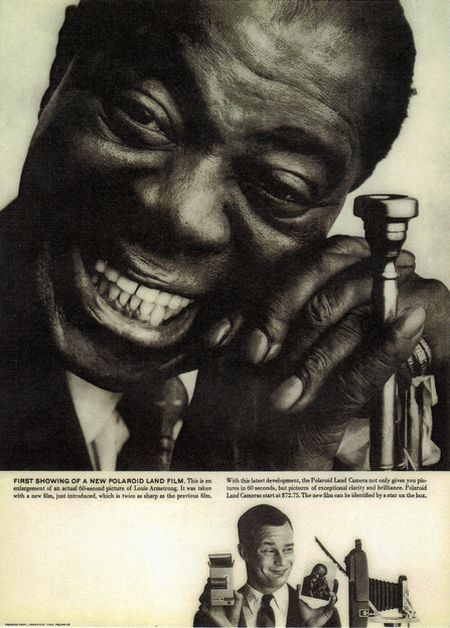 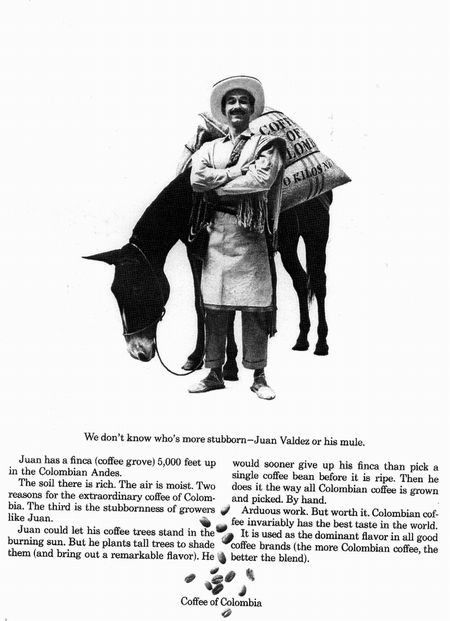 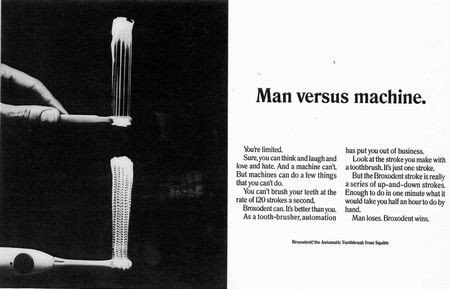 You're limited.
Sure,you can think and laugh and love and hate. And a machine can't But machines can do a few things that you can't do.
You can't brush your teeth at the rate of 120 strokes a second.
Broxodent can. It's better than you.
As a tooth-brusher, automation has put you out of business.
Look at the stroke you make with atoothbrush. It's just one stroke.
But the Broxodent stroke is really a series of up-and-down strokes.
Enough to do in one minute what it would take you half an hour to do by hand.
Man loses. Broxodent wins.

Broxoden the Automatic Toothbrush from Squibb