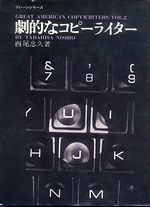 chuukyuu When did you come to DDB?

chuukyuu What was the main motive behind your entry to this company?

Noble They were doing great work and I was doing crap back in Detroit.

chuukyuu Did you come across any interesting episode such as a written or oral examination at the time you were employed?

chuukyuu Under whom did you start working? What account did you have at first? Also, who was or is the most influential figure in your career?

Noble I'll answer the last one first. Bill Bernbach. I started working on Volkswagen as soon as I got here. Of course, I did other things like Soft Whisky and Radio Free Europe, but VW has been the "Biggy" for me.
As for whom I worked for, I worked for anyone who would take time back then to tell me what as wrong with my copy. There were and still are some very good teachers at Doyle Dane Bernbach.

chuukyuu Could you describe to me your past background? For example, your birth place, schooling, your previous agency experience?

Noble It's kind of boring, but OKEY. Born in Rochester in New York---went to Michigan State University---goofed off a lot---married a nice lady---settled down---a couple of small agencies in the midwest---Sears Roeback and Co. in Chicago---Cambell-Ewald in Detroit---DDB. See, I told you it was a drag.

chuukyuu I am certain that your VW ads are the most representative pieces of your company and how it thinks. What was the first impression you received from accepting the task of writing VW ads? Also, who was the former copywriter on the VW account?

Noble When I was first asked to work on the Volkswagen account, my first impression was that my hands were sweaty and that my collar was too tight.
You see, even back in '65, one had the feeling that all the great Volkswagen ads had already been done. They hadn't been done though.
Today there are new people coming in doing even better ones.
Right now there are 7 copywriters and 7 art directors on this account. And I think they're the greatest. Just look at the work. Whether it's an ads in Life magazine or something on the inside of a matchbook cover, the stuff is always the best. It's really amazing how the quality of the work has been sustained. It's also still very scary to have to sit down and try to top the last ad or commercial that ran. The former copy supervisor on Volkswagen was Bob Levenson. The work he did on his account hasn't hurt him too much either. He's now Creative Director of Doyle Dane Bernbach.

chuukyuu Was there any different in the content of the previous VW ads and those that you did while launching this job?

Noble Can I say something else first?

Noble I'd love to take sole credit for all the VW ads and commercials done since 1965. Lord knows, my ego isn't the world's smallest. But the credit for the work goes to a lot of people. Namely, two of the best art directors in the business−−Roy Grace, who I worked with so long I can't remember how long and one Bob Kuperman whom I hope to work with for a long time.
Now, back to the question: Every ad differs. The thing that makes or breaks an ads, of course, is the concept. Back in 1965, we were talking a great deal about the economy of the Volkswagen. We did it so well that just about everyone knew that the Gag got good mileage and had an air-cooled engine. No sense telling people over and over again what they already know, so we switched and began to talk about quality: the way the car is built, the 16,000 different inspection it has to go through before it can earn the name "Volkswagen." 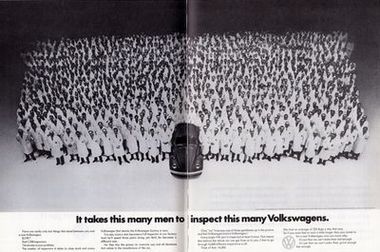 It takes this many men to inspect this many Volkswagens.

There are really only two things that stand between you and a new volkswagen:
$1799
And 1,104 inspectprs.
The money is your problem.
The number of inspectors it takes to okay each and every Volkswagen that leaves the Volkswagen factory ia ours.
You see, once a man becomes a full Inspector at our factory (and he'll spend three years doing just that), he becomes a different man,
He then has the power to overrule any and all decisions that ralate to the manufacture of the car.
(One "no" from any one of those gentlemen up in the picture and that Volkswagen is not a Volkswagen.)
Every single VW part is inspected at least 3 times. That means that before the whole cat can from us to you, it has to
go through 16,000 different inspections in all.
Think of that: 16,000.
We lose an average of 225 Bugs a day that way.
So if you ever had to wait a little longer than you cared to for a new Volkswagen, no you know why;
It's not that we can't make them fast enough.
It's just that we can't make them good enough fast enough.