Grace joined DDB as an art director in 1964 and through the years worked on virtually every major account including American Tourister, BristolMyers, Avis, Chanel, IBM, Miles Laboratories, S.O.S., Alka Seltzer, Mobil Oil and Volkswagen. Some of his most memorable spots are Funeral for Volkswagen in which a thrifty and practical Beetle-driving nephew inherits his uncle's millions, and Gorilla for American Tourister, in which a gorilla batters a su itcase whiIe the voiceover lists the many ways that luggage can be abused. Also of note are Puddle for American Tourister, Cold Weather for Mobil Oil and the S.O.S. campaign featuring taciturn Moe and his wife.
His cinematic style involves very little camera work: the distinctive characters, both human and non-human, provide the commercials with their action and energy.
For Grace, good advertising is achieved by cooperative effort between agency talent and clients with courage and intelligence.
Since advertising has to deliver a selling message to a disinterested audience, the industry has come to acknowledge the value of entertainment in communicating that message.
In much of advertising, the entertainment merely surrounds the message; in Grace's work, the two are inseparable. 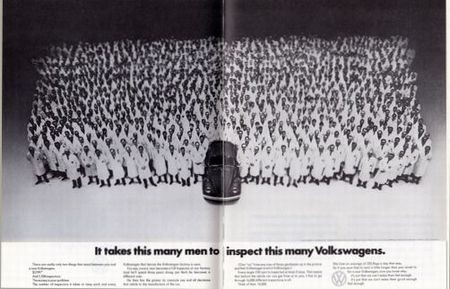 It takes this many men to inspect this mqny Volkswagen.

There are really only Iwo things thai stand between you and a new Volkswagen,
$1799.
And 1,104 inspectors.
The money is your problem.
The number of inspectors it takes to okay each and every Volkswagen that leaves the Volkswagen factory is ours.
You see, once a man becomes a Full Inspector at our factory (and he'll spend three years doing just thal), he becomes a different man.
He then has the power to overrule any and all decisions that relate to the manufacture of the car.
(One "no" from anyone of those gentlemen up in the picture and that Volkswagen is not a Volkswagen.!
Every single VW part is inspected at least 3 times. That means that before the whole car can get from us to you, it has to go through 16,000 different inspections in all.
Think of that: 16,000.
We lose an average of 225 Bugs a day that way.
So if you ever had to wail a lillie longer than you cored 10
for a new Volkswagen, now you know why:
It's not thal we can't make them fast enough.
It's iust that we can't make them good enough fast enough. 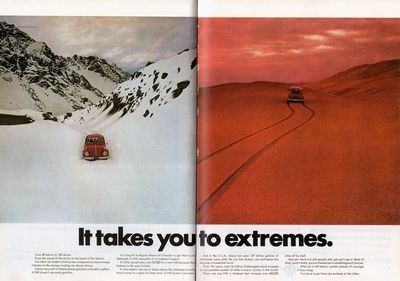 It takes you to extremes.

From 40 below to 140 above.
From the snows of the Arctic to the .sands of the Sahara.
No other car model in history has conquered as many strange climates as the strange-looking car shown obove.
It does very well in Finland where gasoline costs 66¢ a gallon. A VW doesn't use much-gasoline.
It's a big hit in Angola where oil is harder to get than crude diamonds. A VW uses pints of oil instead of quarts.
In Chile, people pay over $5,000 for a new VW because they believe in the way it's built.
It's the number one car in Sudon where the Sudanese aclually have to pay for a glass of fresh water. A VW doesn't use water.
And in the U.S.A., where last year 157 million gallons of anlifreeze were sold, the car that doesn't use antifreeze has become a household word.
Over the years, over 16 million Volkswagens have trooped on uncountable number of miles in every country in the world.
There was one VW in Alabama that trooped over 600,000 miles all by itself.
And yet, there are still people who just can't see it. Most of them, quite frankly, picture themselves in something much fancier.
After all, it still takes a certain amount of courage to buy a bug.
You have to go from one extreme to the other.