chuukyuu What's the fundamental difference between Doyle Dane Bernbach and other agencies in terms of creative freedom and atmosphere?

Mr. Dillon I think the fundamental difference is this: there are a lot of writers and art directors in other agencies who, I'm sure, are very creative and able. But they are not working for agencies run by a writer or an art director. They are working for agencies run by businessman.
The history of the agency business was formed back when newspapers would pay a commission to any body who could get a store to run an ad. One of these fellows thought offering to write the store's ads for them as an inducement. All the service that agencies have added since then started with that.
What this means is that writing ads was offered as an extra service by a businessman, not as the main thing that an agency did. As agencies became bigger, the creative work became more important. But its status had already been established. Creative people were and are usually under non-creative people.
Bill Bernbach changed this. Bernbach was a copywriter and the creative director of Gray Advertising. He knew what good and bad advertising were. The Volkswagen history is a good example. In this country. automobile advertising traditionally showed a car as some sort of big, powerful symbol of glamour.
I wasn't here when we got Volkswagen, but as I get the story, Bernbach and Helmut Krone seemed to feel that people were fed up with this make-believe and that find interesting. Bernbach has alwayas said that believability is one of the main jobs in advertising. Anyway, they not only didn't pretend that the Volkswagen was beautiful, but they came right out and admitted some people found it homely. And while they were at it, they made you feel pretty smart to have bought one. 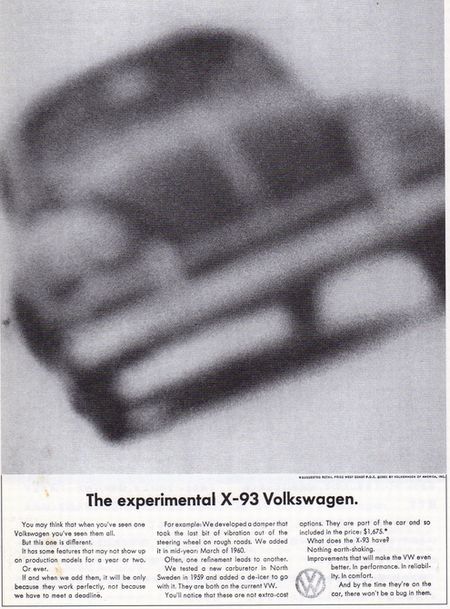 You may think when you've seen one Volkswagen you've seen them all.
But this one is different.
It has some features that may not show up on production models for a year or two.
Or ever.
If and when we add them, it will be only because they work perfectry, not because we have to meet a deadline.
For example: We developed a damper that took the last bit of vibration out of the steerling wheel on rough roods. We added it in mid-year: March of 1960.
Often, one refinement leads to another.
We tested a new carburetor in North Sweden in 1959 and added a de-icer to go with it. They are both on current VW.
You'll notice that these are not extra-cost options. They are part of the car and so included in the price: $1,675.
What does the X-93 have?
Nothing earth-shaking.
Improvements that will make the VW even better. In reliability. In comfort.
And by the time they're on the car, there won't be a bug in them.

This freedom to think about a product outside of the established patterns is probably the strongest attraction Doyle Dane Bernbach has for creative people, I guess it's also a little inhibiting ---you don't have a "norm" to hide behind. It's all up to you. Anyway, when I first came here, I was told that my competition was down the hall, not down the street. It scared me a little, but I got used to it. Now I'd probably feel a little uneasy in other agencies.