How many advertising campaigns do you know that have been the subject of a book?
The Stephen Greene Press of Brattleboro, Vt., has just come out with one---"THINK SMALL: The Story of Those Volkswagen Ads."
This isn't the first time that books on VW and DDB have graced our shelves.
SMALL WONDER: The Amazing Story of the Volkswagen," by Walter Henry Nelson, was published in 1965 by Little, Brown, and was revised in 1967. One of its chapters is devoted to DDB's ads for the car.
We have on hand a 268-page book in Japanese that seems to be about the VW campaign (nearly every other page shows a VW ad).
Another Japanese book, this one mercifully provided with English translation, is called "Great American Copywriters."
Ten of the twelve "greats" interviewed are or were with DDB.

"THINK SMALL" is by Frank Rowsome, Jr., a man who has nothing to do with either DDB or VW.
Armed with an abiding interest in both cars and advertising, he investigates the history of the funny-looking car and its "phenomenal advertising campaign."
The Volkswagen campaign has by now assumed mythic proportions.
As Rowsome puts it, " ... one can gain the impression that the two organizations came together in 1959 as if in planetary conjunction and, in a burst of foresight and acumen, set about making advertising history."

What actually happened, according to the author, was this:
In 1949 as the ad tells us, Volkswagen sold only two cars in the United States.
Company President Heinz Nordhoff, through shrewd industry and management, increased that number to 150,601 by 1959.
VW earned an excellent reputation for dependability and ease of repair.
While Detroies mania for All-New annual styling proved troublesome for service people and customersl Nordhoff adhered to the original 1931 design by Ferdinand Porsche.
Mechanics became skilled at repairing the same basic machinery.
Franchised dealers were selected for experience and industriousness and worked in modernl pleasant buildings.
Dealers were allotted cars in proportion to their service facilities.
Soon Americans had to wait up to six months for their VW Beetles.
Why thenl did VW decide to advertise when word-of-mouth seemed to bring customers flocking?
For one thingl the German factory was planning a great expansion.
Also Detroit was no longer amused by the popular import.
The first generation of American compacts was being prepared for a 1960 introduction.
Last and most important VW management was in dead earnest about expanding their American market.
Advertising became a necessity rather than a luxury. 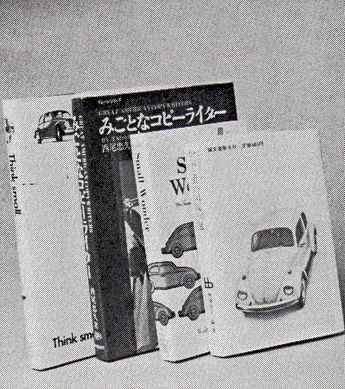 Carl Hahn, the enterprising president of VW of America, and his assistant, Helmut Schmitz, took three months to select their agency.
Agencies vied for the new auto account with far from satisfactory results. Hahn. noted, "All we saw were presentations which showed Volkswagen ads exactly like every other ad-an airline ad, a cigarette ad, a toothpaste ad. The only difference was that, where the tube of toothpaste had been, they'd placed a Volkswagen."

The account was finally split between Fuller & Smith & Ross (Type 2 vehicles such as the Transporter) and DDB (the Beetle), "then a sassy young agency with a growing name for producing unconventional but effective ads." The budget for DDB was a conservative $800,OOO-not enough for the widely-used "saturation" technique.

Bob Levenson, who wrote the ads for three years, commented, 'We had this theory-that's probably too big a word this attitude, that Every ad has to be its own campaign.
There just wasn't the money to indulge in the luxury of saying that the cumulative effect of FAST FAST FAST or Amazing Coffee Discovery! is going to add up to something at the end of twelve months.
We didn't have that kind of funding-we were lean."

DDB was only about 80th in national agency ranking at that time.
But its people soon changed Hahn's impression that agency personnel were "all a bunch of phonies." Hahn appreciated the agency's rigid honesty.
And DDB appreciated the auto account, a big step for the lO-yearold firm whose reputation had been made in soft-goods.

The VW magazine ads of 1959 were, in Rowsome's words, "an immediate crazy success." Readers found them "truthful, excellent, witty, sophisticated ... and cute."

When domestic compact cars were introduced, sales of all imports fell-except for Volkswagen. Rowsome is careful to point out that ads alone did not account for VW's success; nor was DDB's amazing growth due solely to the VW account.
With a perspective of ten years, Rowsome attempts to identify exactly what made the ads so effective.
One element may have been the sameness, the prevailing mediocrity of conventional auto ads with their bland copy and incredibly splendid illustration.
"Against this backdrop, auto ads marked by freshness, honesty, and a high factual content, idiomaticallypresented, tended to seem like an invention that ranked with the wheel."

As Schmitz said in 1963, "To be honest in advertising requires the courageto understate rather than to overstate."
All this was rather weird in 1959.
Stuart Perkins, current president of VW of America, commented, " ... For most people this was a pretty funny-looking automobile. It was a kind of homely dog, and you know you love a homely puppy more. People came to feel that to look like that, it had to be good." Unusual elements of the ads were: realistic photography instead of illustration; intelligent copy not geared to the lowest common denominator; humor instead of rhapsodic preaching; gentle self-deprecation rather than elaborate claims.

Bob Fine, Account Supervisor for VW, explained, "We recognize that an ad is an intrusion ... Therefore, to do a good ad, you're obligated, really, to reward the reader for his time and patience in allowing you to interrupt
the editorial content."

The format of the ads was simple and direct.
The headline was centrally placed under the illustration.
It was a statement ending with a period rather than a "news flash." Typeface was legible. Short lines were not fleshed out like "newly baked bricks," but were left with "holes" and "widows" aplenty.
"It was the kind of thing we typically do in our agency," said Bob Levenson, "thrash around and try to find a way of doing things that hadn't been done before.

I don't know that we were all that sure at first.
There was a temptation to out-Detroit Detroit ... to have prettier girls than Chevrolet, or higher mountains than Ford."

The original Beetle was not the only model with which DDB had to deal.
In 1960, VW banked all of its advertising with DDB, which in turn produced what Rowsome calls "some of the most joyously cockeyed ads ever made" for the box-like station wagon and t~ansporter.
Appealing ugliness is the last thing you'd ever associate with the Fastback, Squareback and Karmann Ghia.
But even with a new selling proposition, down-to-earth humor remained ("There's a little bug in every Karmann Ghia").
There's the story as Rowsome sees it.
But his book is more than an interesting piece of Volkswageniana.
"Think Small" comments on the American's relationship to his car, on advertising in general and on the automotive industry.
Some 30-odd illustrations trace VW ads from the rulebreaking "Lemon" to the late great "It's ugly, but it gets you there."