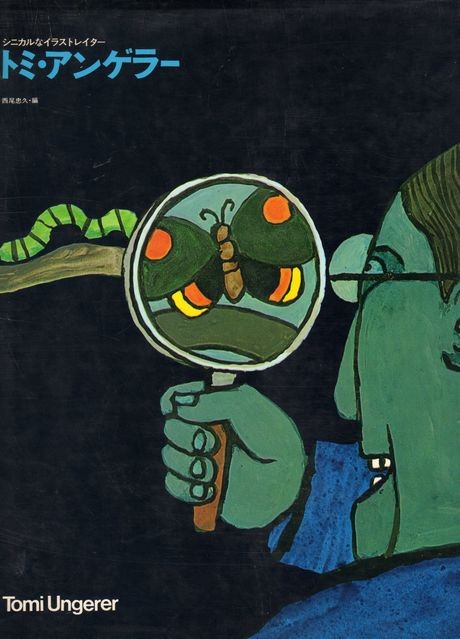 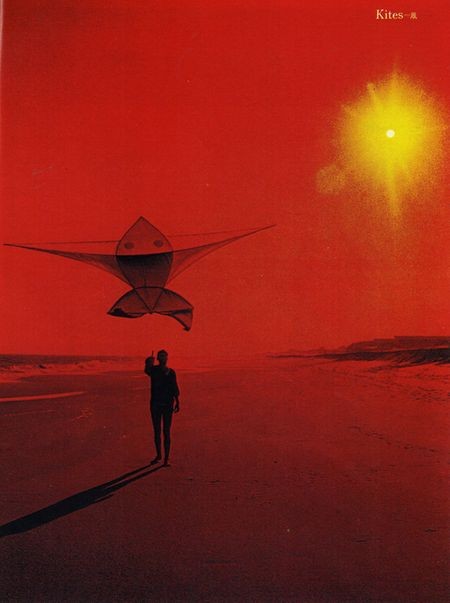 Making kites and kite‐flying is one of a lot of hobbies.

When Tomi was three, his father, Theodore, passed away. And Tomi never mentioned to me any concrete impressions lingering in his memories of his father.

The father image he did mention was one created by his mother, who made a hero out of his father.
I am not able to judge, in such a case, how much the image given to him by his mother would have influenced his earliest period.

At all events, Tomi does not seem to remember much about his father-the warmth of his hands, the thickness of his beard, the width of his shoulders, or the breadth of his arms.
He cannot remember his father; but his only daughter, Phoebe, now five years old, will surely remember hers. 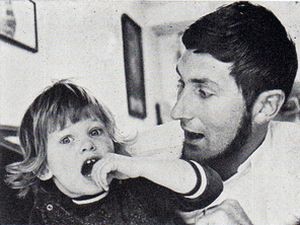 Tomi and his daughter Phoebe

One Sunday, Tomi took me to his Park Side apartment in New York. Phoebe, a darling blonde, was waiting at the door for her father who was just coming back home from Montreal.
Picking her up in his arms, he caressed her blond hair almost frantically, yet with much tenderness.
Later, we had lunch together at Mitzi's Jager House, a German restaurant. While waiting for the food to arrive, Tomi told her an impromptu story, using a beak he had fashioned by folding the menu, placing it on his face and moving it to dramatize the tale.

At the time, I wondered if the story and paper beak were actually inventions of his made up on the spur of the moment, or whether he had recollected a story heard before. But it really does not make much difference.
The happy chuckles of a delighted Phoebe listening intently to her father's narration still reverberate in my ears.

Phoebe often acted quite spoiled, pounding on her father's breast and pulling at his beard, so I thought J would ask her a rather cruel question,
"Phoebe, do you like your father?"
She made a difficult face and replied, "Of course, I like daddy when he brings me a present. But I don't like him at all when he doesn't play with me."

Turning then, towards her father, she implored, "Oh, daddy, why can't you stay with me all the time?"
This naive question seemed to cause some bewilderment on the part of Tomi. During the past months, he had spent most of his time in Canada, working on a movie project in Montreal and some other work he had contracted for the World's Fair.

When Phoebe grows up, she may remember little of the time she spent with her father on that day, but she will surely remember the warmth of his hands, the sharp pains of his beard, and the smell of cigarettes his clothes.
Tomi remembers nothing like this of his own father.

On Sundays when their father was still alive, the four children, I was told, would pass pleasant hours together with their parents.
According to what his older sister told me, the children, and some priest, would join together in playing hide and seek in the daytime.
The sister can still remember the priest, dressed in black flowing robes, trying to hide himself under the desk. Sunday evenings, however, seem not to have been so happy for the children, for at night the usual practice was for the father to take out his violin, the mother to set herself at the piano, and the children had to spend the hours of dusk by themselves.

Listening to the description of the older sister, it was easy to discern that her memories were confusing the time her father was still alive with that after his demise.
This fact, again, would make little difference. What it boils down to is this: Tomi has no vivid image of his father.

After theiF father died, the family moved to the mother's birthplace, Logellach, a small town near the city of Comar and about 70 kilometers south of Strasbourg.
The family of the mother were in charge of a textile mill in Logellach. There Tomi lived until he was nearly twelve, or for about ten years.

Although many things must have happened to Tomi during his stay in Logellach, I shall only select two events which I believe exerted a great influence on his later life.
One of them concerns the time Tomi was six years old. His two elder sisters, fifteen and sixteen years of age, were supposed to look after him, but as can be imc:gined, he was little more than a living doll to be used by them---a natural target and release for their impish and juvenile whims. 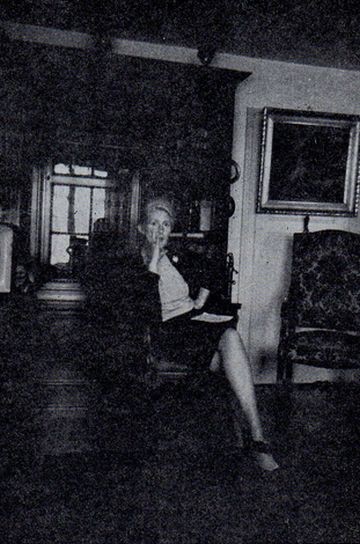 One of his sisters one day had the bright idea to sew a large collar she had knit of white wool on Tomi's clothes.
When Tomi went to school wearing that garment, he was mercilessly ridiculed by his classmates.

Again an instance occurred when his sisters found that they did not like the way Tomi wore his hair. At the suggestion of the maid, they tried to straighten out the curls by soaking his hair in sugared water. When the sugar had hardened the next morning, his curls stuck straight out like the whiskers of a mouse.
The girls tried to wash the sugar out with water---with no success. So Tomi had to go to school that day. looking like a scared duck.
It would be foolish not to think that the treatment given him by his sisters did not generate a rebellious spirit in the young boy.
And knowing that he was unable to repay his sisters for their teasing, he quite likely felt a great damper placed upon his feeling of resistance.
Now that he has grown up, of course, he harbors no ill feelings against his sisters, but as the youthful Tomi. he must have quickly acquired a stout heart.

The second occurrence took place when Tomi was eight.
The war had broken out between Germany and France. lasting for four years until Germany was finally defeated.
The details of the Second World War are well known to most of us today, and can be found in any history book.
In the early part of the war, the Alsace-Lorraine region, which includes Strasbourg and Colmar, came under the Nazi occupation.
When I asked Tomi about the memories he still had of his boyhood period, he immediately groaned, "The War? It was unpleasant and horrible."
The Alsace-Lorraine people, who had come under German rule as a result of the Franco-Prussian War of 1870, originally spoke an Alsatian language stemming from the Germanic language. Under the new regime, however, they came under the influence of the German language, and spoke that up until the First World War ended, when the region again became a territory of France and received their education in French.

As a consequence of these wartime maneuvers, the invading Nazis were faced with two generations, one of which spoke German and the other French.
Regrettably, I am not fully cognizant of the method the Nazis devised to handle that situation of a dual-language speaking people.
What is more to the point here is that Tomi found the Nazi occupation to be both "unpleasant and horrible."
When I visited the home of his parents, I was shown nearly one hundred items he had produced during his days at Logellach, most of which were about the War.
The magnitude of his collection overwhelmed me. (A surprisingly large number of his works, ranging from the scribblings he had made at four years of age to the drawings and sketches he produced in his boyhood years, are still well preserved. I studied each of them meticulously, and with admiration, types of papers, and each piece was carefully dated.)

Tomi's sisters admitted that they themselves might have been responsible for his inspiration by imposing on him something similar to Nazi brutality.
I was not informed of the exact words they had used on him, but the drawings produced by the infant mind of Tomi were transformed into a series of stories about the war.
His sisters said that the tales they had told him stimulated his imagination, which led to his drawing other pictures based upon what he had heard.

Tomi's drawing done in his boyhood(1943)

Many of his works depicted, point by point, the fierce resistance of a small boy directed gainst the Nazi.
His mother and sisters refused to make these drawings public, for fear perhaps, that an international incident might arise from them. But I insisted, not for the sake of displaying Tomi's early artistic genius to the world, but rather because I wished it to be shown that his early rebellion first directed towards his sisters had later grown into a mental resistance aimed at the spectre of Nazi oppression.
Tomi had become a man whose soul was driven by the energetic fires of a rebellious spirit, although the target of his antagonism changed with the passing periods.
Compared with the two events I have just described, two other episodes related to me by Tomi's mother and sisters seem to be almost of little consequence.

One of them concerns the time he was attending the lycee in Colmar. The story is clearm Tomi's letter sent to his gog-parent.
It seems that on his way home from school, Tomi was approached by a classmate who had a very powerful type of glue. The friend wanted to know if it would be all right to put the glue on Tomi's head.
Tomi agreed, and the classmate spread a large amount of the glue over his hair.
Taken aback, Tom rushed into a friend's house nearby and tried to wash the glue from his hair.
In the process, he washed so hard that a large tuft of hair fell out.
By this story, I presume, Tomi's mother must have wanted to show his good nature, but I must confess that I am unable to understand why Tomi permitted his classmate to perpetuate such mischief.
And the import of this episode is not completely clear to me, either.

The other episode goes like this. During the war his mother Alice took to raising a number of chickens, but as so often happened, the war  brought on a severe shortage of food, and the chickens were faced with a long period of hunger. Only twelve years at the time, Tomi had an idea of feeding them: He bound their legs together and brought them to a cornfield.
There would appear to be great merit in his project-and it must have been an exciting adventure.
But as far as I can see, this story has no other significance.
Another meaning becomes clear, however, when we hear an account of the episode from the lips of Tomi himself: "When I was 12 years old, I was machine-gunned by American airplanes because the American airplanes shot everything alive. I was, for instance, in the field with my pet chickens, after the harvest, so that the chickens could pick up the corn, and the American airplanes came down and started to machine-gun. Three times they came down."

Tomi, at the tender age of twelve, had his first confrontation with death.
The experience must have been beyond the range of his comprehension.
For the boy, defiant to the authority of the coercive Hitler-lugend training regime, could little understand why he should be shot at by the airplanes of a friendly country.
Such incidents as this directly experienced by Tomi must of course have been quite common in France during the wartime, as I have heard a similar account of a dreadful time a friend of mine in Lyon once had. While an adult might understand easily the motives underlying such accidents, the child was faced with something beyond the powers of his reasoning, the effects of which, consequently, would naturally leave his soul scarred with a sense of distrust and disbelief in war. 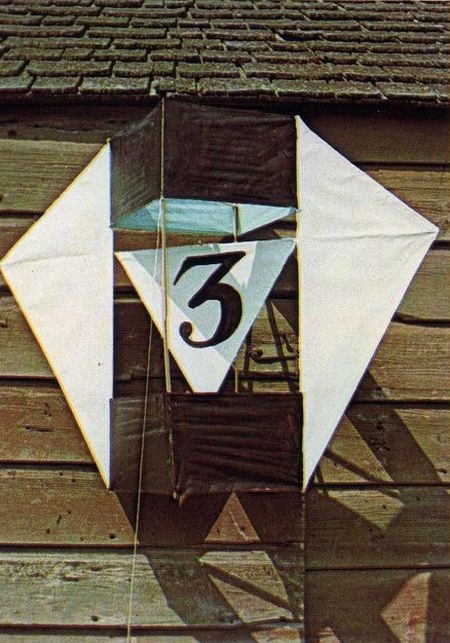 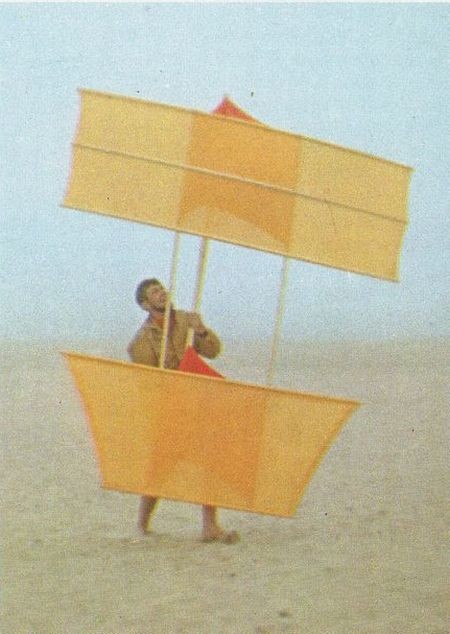 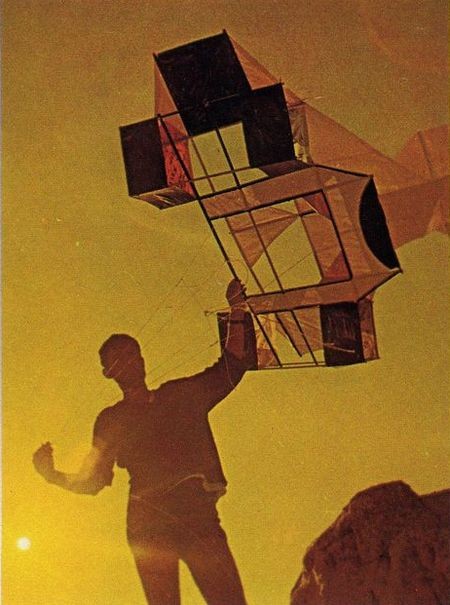 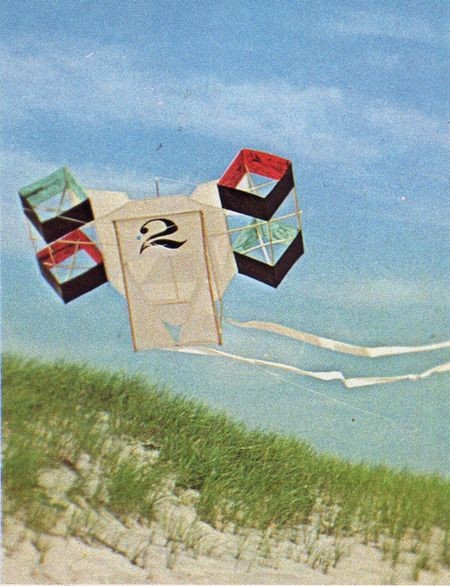 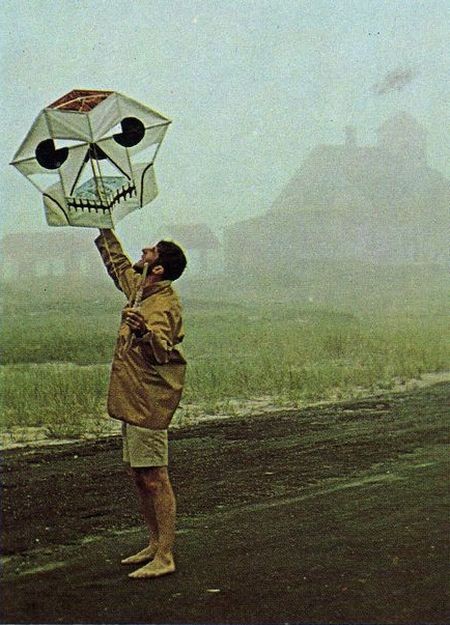