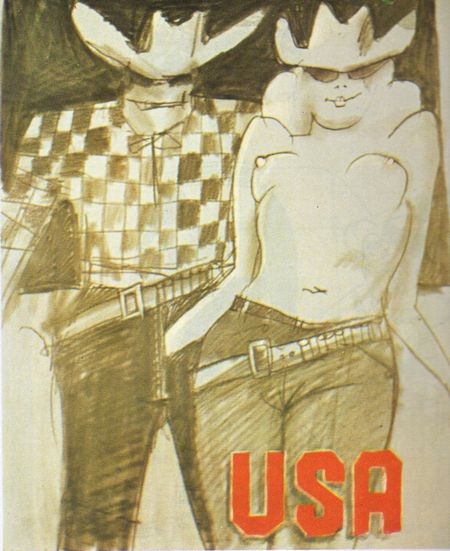 In 1950 Tomi took off on a motor-scooter trip to England.
He was only eighteen at the time, and knew a little English he had picked up at the lycee.

As far as Tomi's language ability goes, he himself said, "I've managed to learn English well enough. I write fairy tales in it."
French, of course, is his mother tongue, but as an Alsatian, he naturally knows how to speak German.
That seems to be the extent of his linguistic attainments, however, for he has
mastered no other foreign language.
Finishing his travels in England, he wandered around Italy and Holland, hitchhiking his way.
Tomi always seemed to want to see every place, to know everything.
As he travelled through those many countries, he probably heard numerous stories recounted to him by the woods, the houses, the stars and the streams.

And his perceptive understanding of beauty was probably derived from the stained-glass windows of churches, the paintings and sculptures in all the art museums he visited.
Yet an even greater factor in his education as an artist must have been the people themselves of each of the countries: the humanity of their foibles, foolishness and wisdom, loves, angers and hates, and the ways in which each man must live with them.

His odyssey went on and on to include Scandinavia and Iceland.
With no money, he pursued the course of his travels by working on fishing boats as an ordinary sailor over the water, and by hitchhiking his way over the land, His face was often badly burned by the sun, his skin came to reek of the fish he caught, but in the sketchbook of his mind, each day of his sojourn with all its excitement added page after page to material, enhancing always his burning desire to create.

In 1952 came the call to arms.
Tomi was drafted and wound up in a camel battalion stationed in southern Algeria.
His unit had the task of trying to settle disputes between the hostile tribes of the region.

As can be imagined, Tomi was not cut out to be a soldier.
His tour of duty lasted but a year, after which he was sent home to be repatriated, mainly because he had contracted rheumatism and pleurisy.

The hot, arid clime of the desert land was not at-all agreeable to his delicate disposition.
At least, such were the reasons given, but I would rather interpret his illness from a psychosomatic standpoint.
The strict and unrelenting discipline demanded by the military directly reacted with his rebellious nature, causing the diseases to develop in him more likely by reflection and mental indulgence.
The life of the military with all its regulations could have brought about such diseases in the boy, to whom any form of compulsion or coerced action was always repulsive.
Tomi today is still afflicted with rheumatism so severe that at times he is hardly able to move his arms.

His stay in Algeria did have a good side to it: It brought him new and unusual experiences --- the red moon setting beyond the limits of the desert, the stars twinkling in the great and lucid sky would have done much to create in him the urge to write poetry.
Although I have not seen any of the poems written by Tomi.
I can easily imagine that his period of confinement, so to speak, in Algeria contributed to his poetical writings. I can imagine that some of his poems were actually the prototypes for his later fairy tales, such as The Moon man(1967), Rufus, the bat who loved beauty, and Crictor(1957), the stunning snake.
Other poems have been restyled or revived, and appear in his critical and ironical books, like The Underground Sketchbook(1964) and The Party(1966).

It seems to me that Tomi thinks all experience should be fully exploited.
And I believe that Tomi finally decided to become a painter after he was discharged from military service.

The two paintings which the Schmidt now have were probably turned out by Tomi after his release from the service.
They have not the slightest trace of the immaturity or puerility of a youthful mind.
Their mature mastery makes me feel sure that they are works produced after Tomi came out of Algeria.

One of the paintings reveals the fertile imagination so characteristic of Tomi: the skeleton of a fish composed of grass leaves, streaked with fine lines and put upon a plate.
The other painting presents the sun shining over a plateau, with yellow as the basic color setting the mood such a sketch that might be found anywhere, but in this case so unmistakably that of Tomi with its singular air of feeling.
Tomi painted, when he was twenty-four, a monumental picture on the wall at a school gymnasium designed by Francois. 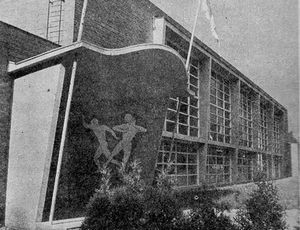 The mural painting on a school gymnasium in Strasbourg which Tomi painted at the age of 24 asked by Mr.Schmidt.

The chance to paint that came as a result of the high opinion in which he was held by Francois, his brother's father-in-law.
As Francois knew it would, the painting drew great popular acclaim; and Tomi, encouraged by the first heady rush of success, became all the more confident of his ability.
At that particular time, more so than at any other, Tomi seemed to have made up his mind that his natural ability would best be put in the direction of painting.
Since he was then already twenty-four years old, the decision was by no means premature. 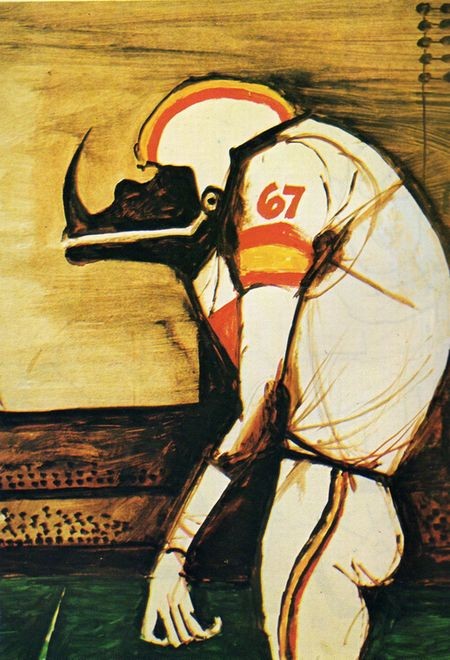 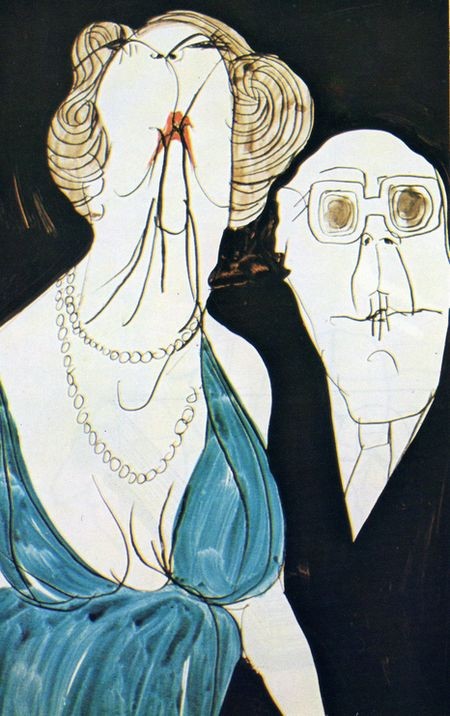 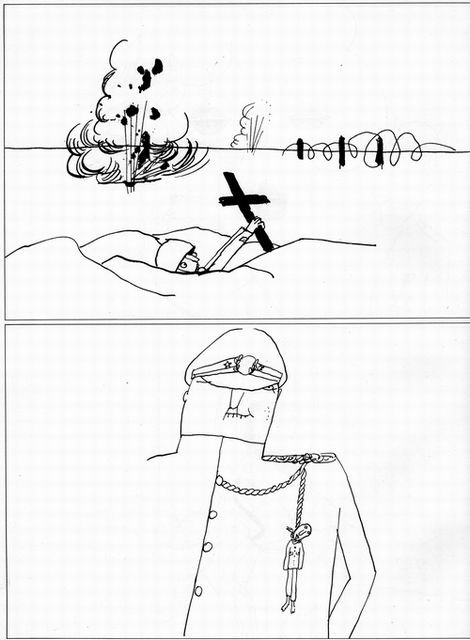 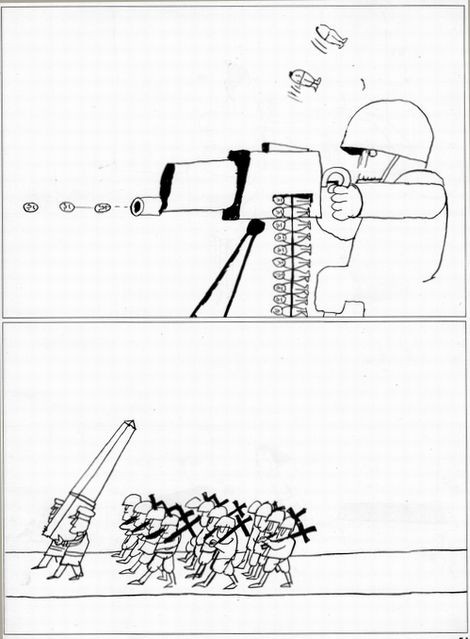 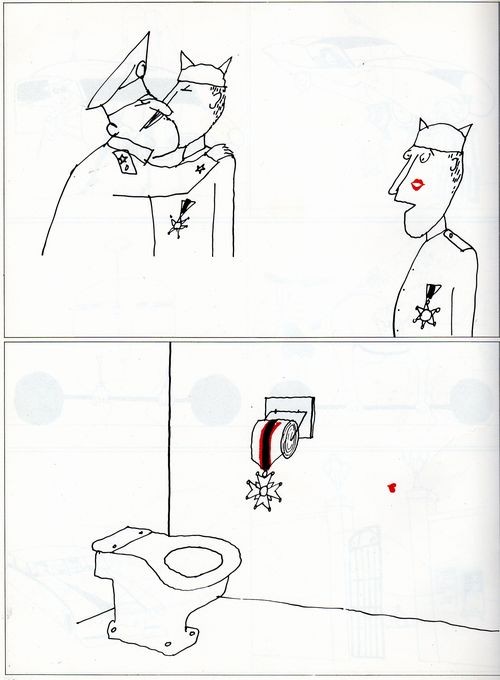