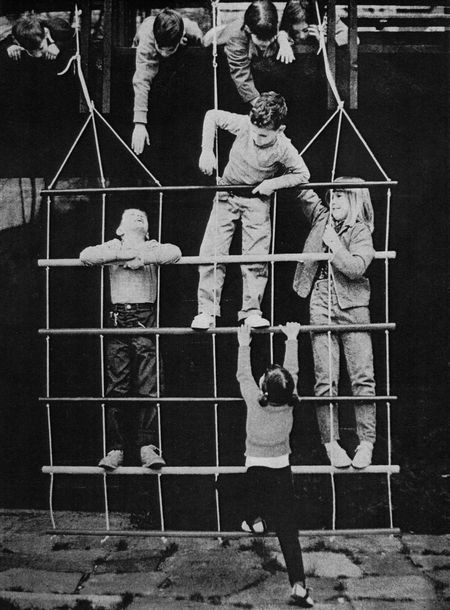 After our amusement spent its natural course, Tomi searched through the pile of debris around the room, and like a magician; pulled bits and pieces of objets d'art out for my inspection.
He fired questions- at me one after another:"Would this be all right?" "Shouldn't this be included, also?" and so on.
I was surprised that a number of the things he brought out, including toys, sculptures, dessins and other work, have never been presented to the public before.

The problems of our project became very clear-Tomi simply had an overwhelming volume and unassorted collection of articles.

"Now look, Tomi," I said, "If you want me to put all these in my book, I'm going to have to expand ie to 'Complete Works of Tomi Ungerer.' "
And then 1 suggested that we should settle down right then for a long discussion on the overall merits of each piece. We had been so busy up to that time, looking and laughing together, that we had barely managed to exchange little more than the usual hello and shake each other's hand.

chuukyuu: Do you have an author that particularly influenced you?
Tomi: I read a lot of books. I must ,say I have more friends among the writers than among the painters. There are many books, of course, that have influenced me. Art form is really just technical field. It is just a matter of going to school or learning. I think what is much more important is what is behind the drawing. Technique doesn't really mean that much. I think intellectual concept to change on the mind is much more important. One great influence on me is Louis Ferdinand Celine. That was one of my great influences. He wrote Le Voyage Au Bout De La Nuit.

chuukyuu: What poem do you like best?
Tomi: There are a lot of poem that I like best. It is very difficult because the liking of poetry goes with the change of the moods. You are in a certain mood and like a certain poem. And then another day in another mood, another poem. Among the American poets, my favorite is E. E. Cummings. Another book that I like very much is Tin Drum by Gunter Grass. It is a novel.
And so many French poets, mostly classics, from Francois Villon to Jules Laforgue. They are great favorites of mine.

chuukyuu: What painters do you like?
Tomi: There are many who have been great influences upon m~ I like Francessco de Gaza, Hieronymus Van a ken Bosch>, George Grosz (I'm doing a book about him). Modern painters, I don't know. I think they are my favorities, great influences.

chuukyuu: What kind of music you like?
Tomi: Every type, teenage music, classic music. Only one thing that I don't like is American popular music. You know things like West Side Stories.

chuukyuu: What about theatres?
Tomi: I like classics. I don't go to the theatre. I like to read plays more than I like to see it. So my judgment on theatre is really more literary judgment. I like Jean Anouilh very much. Jean Paul Sartre in the modern theatre and early Tennessy Williams plays. And Samuel Beckett.
He wrote Waiting for Godo. I love movies. I really like the movie. I go to movies all the time. I like all the American movies. I like so many types of movies. I like Japanese movies very much, too. All the Kurosawa movies, I adore.