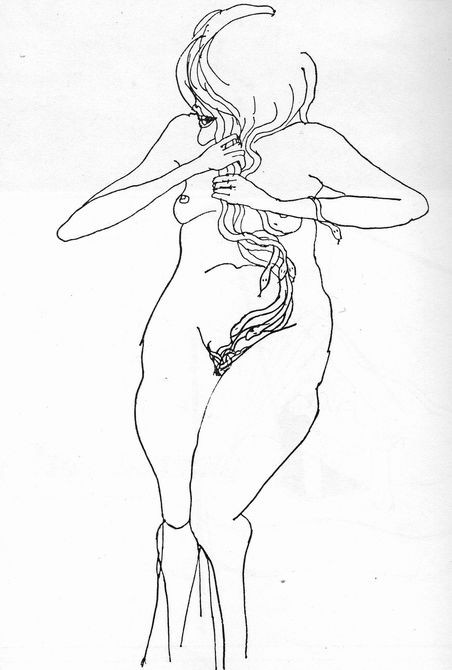 I first called on Tomi at his New York apartment.
I remember that it was 10: 30 am on November 12, 1966.
He had just returned from Montreal, Canada.
I met him in his atelier at 20 West 42nd Street.
I arrived at his apartment house about 40 minutes before our scheduled appointment time, and first making sure that that was the place by looking up Tomi's name under " U" on the directory in the first floor, again went out into the street where a light rain had begun to fall.

The wet pavement reflected the bright billboards flashing on the movie theatres down the street.
This area of town, wedged in between 7th and 8th Avenue, is sometimes called ”the street of erotic and grotesque nonsense."
The theatres boast a fare of two or three pictures, many of which we would call in Japan" ero-duction " films.
Down the street from the movies can be found a line of small cafeterias and stores specializing in cheap transistor sets, alongside a number of combination book stores and record shops displaying a wide vanity of pornographic literature and lewd photograph in then windows.

Everything that meets the eye is naked and mad, sensual, wild, cunning, lusty or dusty---this district truly reveals the fiery wounds of the great city. 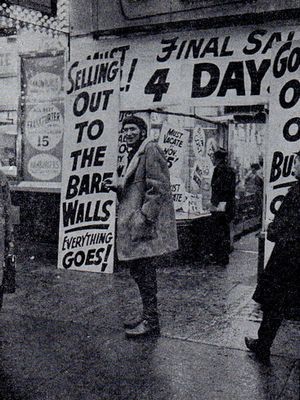 Tomi was posing front a shop, at 42nd Street, which was doing a clearance sale.He said "I like 42nd Street best because this is the wildest."


I killed the few moments left before I had to meet with Tomi by diligently reading the titles of all the sex magazines, letting my imagination run wild with speculations about their contents, examining carefully the preview pictures of scenes from the movies posted at the entrances, and mentally calculating in Japanese yen how much the dollar prices of the made-in-Japan transistor radios amounted to.

Later, when I met Tomi, we took a stroll along this tiny corner of the world.
Tomi was in good humor, kidding and joking with me.
He confided: "I like this part of New York best. That's why I've set up my workshop here. as you can see. It's disorderly and mean. I like it just as it is."
The windows of the little transistor shops were pasted full with the omnipresent signs of the trade: "Prices slashed" or " Big Discounts" drawn in huge letters of red and black on old sheets of newspaper. I asked Tomi to stop here and there in front of the shops so that I could take his picture.

I could well understand what Tomi was trying to say about that section, for I myself ha'd spent some time roving around the area before meeting him.

Tomi's atelier is on the 21st floor of the apartment building.
Going up in the elevator, we were quite alone, there being no other guests, probably because it was Saturday.

In less time than it takes to tell, all of us were transported to his atelier in the sky.
I say all of us, because I had brought with me two of my friends: Koichiro Inagaki, a graphic designer. and Takashi Oi, who had offered to lend me a hand as my assistant. Inagaki came along because, he said, he had to satisfy his intense curiosity to meet the famous artist, while Oi, a political science major in the Graduate Department of Columbia University, later admitted that" As far as I can see, he is a complete nut."
His remark about Tomi tickled me immensely.

Tomi cannot seem to rest until he has changed, rearranged or remodeled whatever touches his hand or strikes his eye.
No, I do not think that we should say that he merely likes to make over things; it might be closer to the truth if we say that Tomi has a special image in the eye of his mind and whatever meets that eye
must conform to that image.

Let it suffice to cite just one example of Tomi's uncommon but productive imagination.
On the wall behind his writing desk ,I saw pinned a postcard showing a portrait of the
upper half of President Johnson. The President, in the picture, appeared in the cloak of his best dignity and poise, a pose which could be interpreted as symbolizing the essence of American democracy.
As one's eye trailed down the figure, however, it found an element which did not originally belong in the picure: a gigantic penis formed of greasy clay. The penis, too huge for the size of the picture, hung with great levity, like the outspread tail of a defeated dog hot on his heels in flight.

Going from the picture, I caught Tomi's eye.
We both burst out into laughter. The postcard, with its added detail, resembled a modern ver· sion of Goya's Maja pictures with an extemporaneous and monistic expression.

We laughed together again, and in that instant I felt the bonds of our friendship grow all the more stronger. 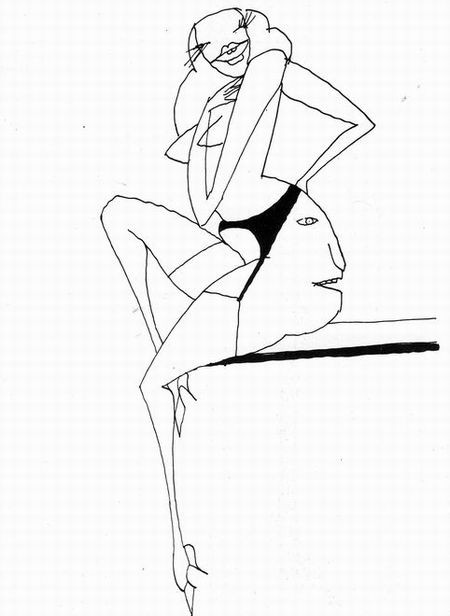 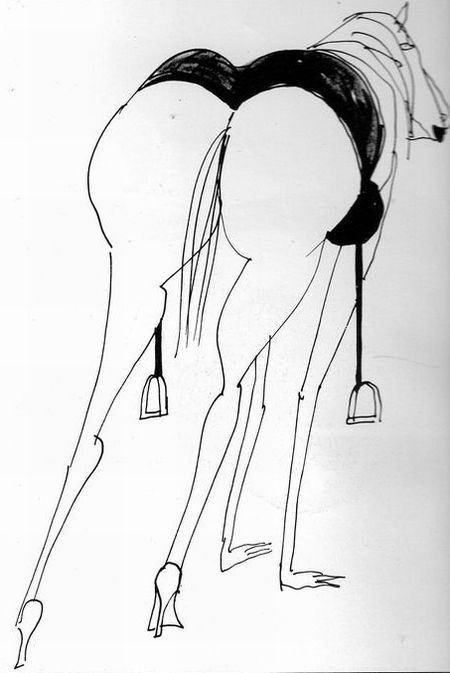 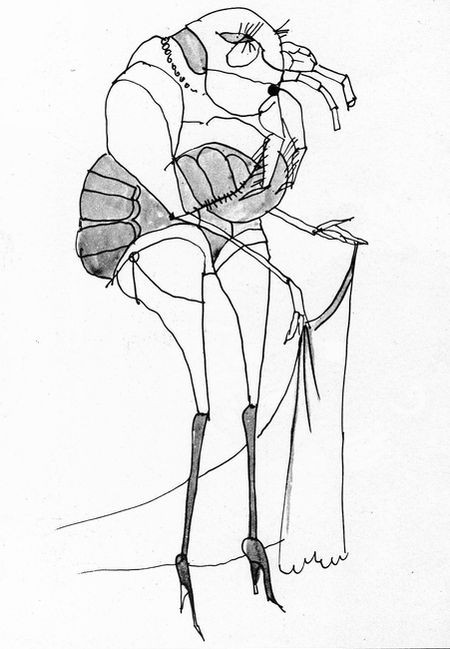 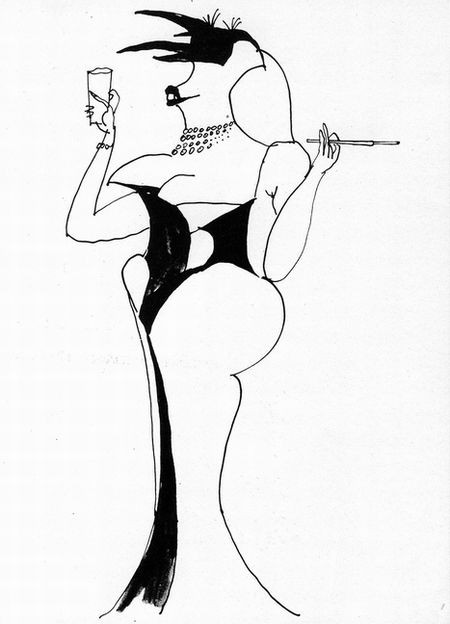 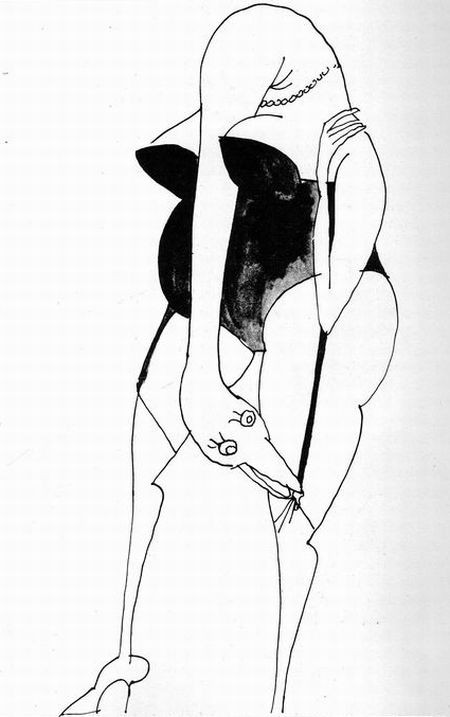 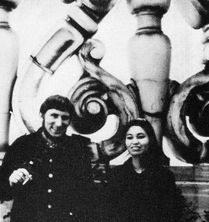 Tomi and Yoko Mitsuhashi ,the illustrator, at the balcony in Tomi's atelier. 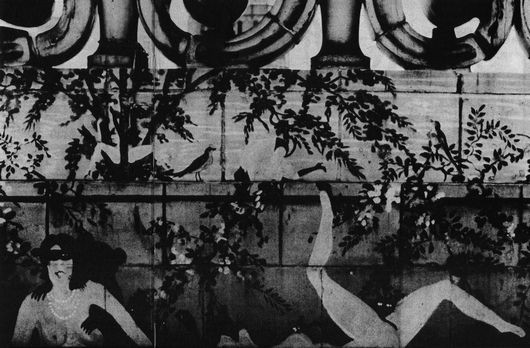 Tomi's the balcony of his atelier, Tomi added semi-nude women to the ballet-teacher, former resident, had dawn.