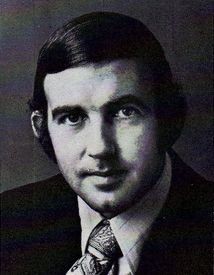 In talking with John one senses a deep respect for his craft and especially for the people who create along with him.
"Advertising is people," says John.
"And at Doyle Dane Bernbach you've had the best people in the history of advertising. That's what makes it unique. I've learned from the best and I've done my best to teach younger people. It's an evolution. "

John has a definite goal in mind as Copy Chief and again it has to do with people.

"In the past eight years I've had the good fortune of bringing along and working with bright young talent at this agency. As Copy Chief I hope to be instrumental in keeping these talents by rewarding their gangbuster books here.
Because, very simply, when you've got the best people, the best ads come out."

Getting to know every writer in the agency better, what they do and what they're up against, is part of his plan too.

"But I feel it's wrong," he adds, "for me to give up doing the work just to become a counselor. I, too, have to gain respect. And that isn't done, in this job, by sitting on a pedestal and judging others.
It's done by doing great work.

"Marvin, Bert, Mike and myself have got to stay on the farm and make good jams and jellies. And if we turn out a couple of bad batches, then someone upstairs should say, 'Hey, Mom and Dad are getting feeble, but I think young Mike and Susie can handle it now.' And that's the way it should be."

John's work has won many awards over the years, but he is in no way hung up on creativity per selling. He looks at advertising solely as a business with selling the product the end result everyone is working toward.

"Selling is right at the top of our list, always," says John. "I don't think there's anyone here who feels any different." 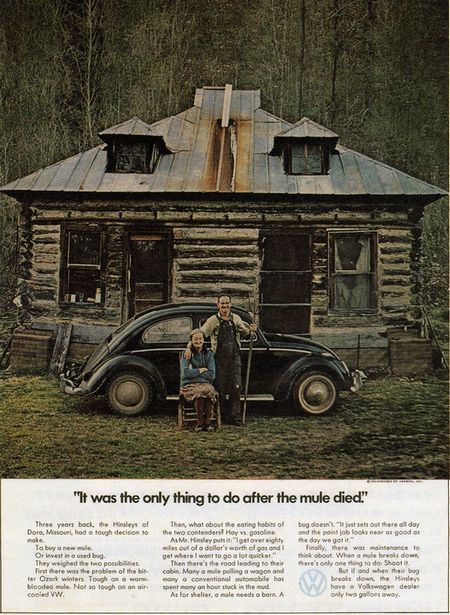 "It was the only thing to do after the mule died."

Three years back, the Hinsleys of Dora, Missouri, had a tough decision to make.
To buy a new mule.
Or invest in a used bug.
They weighed the two possibililies.
First there was the problem of the bitter Ozark winters. Tough on a warmblooded mule. Not so tough on on air-cooled VW.
Then, what about the eating habits of the two contenders? Hay vs. gasoline.
As Mr. Hinsley puis it: "I get over eighty miles out of a dollar's worth of gas and I gel where I want to go a lot quicker."
Then there's the road leading to their cobin. Many a mule pulling a wogan and many a conventional automobile has spent many an hour stuck in the mud.
As for shelter, a mule needs a barn. A bug doesn't. "It jusl sets out there all day and the point job looks neor as good as the day we got it"
Finally, there was maintenance 10 think obout. When a mule breaks down, there's only one thing thing to do: Shoot it.
But if and when their bug breaks down, the Hinsleys have a Volkswagen dealer only two gollons away.