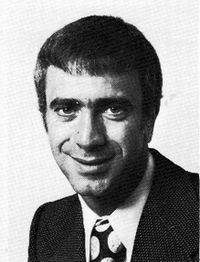 Mike Mangano majored in English and biology when he attended St. John's University in Brooklyn. He was torn between wanting to be a writer and a doctor.

"But I couldn't afford to become a doctor, and I was sure I wanted to write," says Mike.

Write he did, with a talent that led to his being named Associate Creative Director of DDB last autumn, at the age of 36.

The appointment was made by Creative Director Marv Honig, and Mike describes his new job as "backstopping Marvin."

When Marv is out or unavailable, Mike will be in and available.
The job was still new at the time we spoke to Mike. "It's kind of loose ... there are no hard and fast delineations of responsibility."

But since obviously the job is supervisory, we talked about that aspect of the creative process.
"I believe you have to be careful not to oversupervise," said Mike. "Not to try to get people to do it your way.

"If there is something wrong with the ad or board, it's important to tell them why. The thing should be talked out then and there to the point of total clarity, so that nobody leaves the room with any doubt or confusion about why it's wrong."

"But there are also times when nothing is wrong, and yet you think it could be done better. You try to get them to want to go back and do something better without hurting their feelings about what they've already done."

The magic, Mike believes, is in the creators, not in the supervisors. "As a supervisor, you can help give guidance, but that extra touch of magic has to come from them."

He finds that good supervising is demanding and time-consuming.

"You have to get involved all the way through. It's not just a matter of approving or not approving a piece of work.

After you approve it, you may have to spend time fighting for it-with the account group, with the client. You can't let the people you supervise down."

Does the increased supervisory responsibility mean less time for his own writing?

"Not at all. I'm now doing more writing than ever before."
Can his advertising writing be characterized in any way?

"I hope not. I think if you look at my work, you'll find it varied-it's allover
the lot. Perhaps there IS something that characterizes it, but I hope there isn't."

Mike's first writing job was at a smal house agency for a photographic equipment distributor. Later he wrote promotional material for the American Management Association.

From there to SmithGreenland as a copywriter. And in 1965, to DDB. For the first two years he was a trade writer on Uniroyal, along with Evan Stark.

"We would kill for a consumer ad," he remembers. "The first consumer ad I was assigned was a Canadian newspaper ad for U.S. Royal tires. That was considered a plum."
It was all up from there. Mike got the Keds account when it came in, and later Chivas, Beacon Wax, more of Uniroyal.

He and Jack Piccolo did the introductory work on Audi, and together they worked on Whirlpool. Mike -wrote "Mr. Dirt" with Bill Taubin after Roy Grace and Evan left DDB, and with Helmut Krone he did-- The Fox for Audi.

For the past year and a half he's been on VW-"84 m.p.g.", "Newspaper" and "Wall Street" are a few of the commercials he wrote in 1974, with Charlie Piccirillo art directing.

He recently finished campaigns for Henry McKenna Bourbon and John Jameson Irish Whiskey. And started a campaign for a new Polaroid camera.

As Mike says, varied all over the lot. 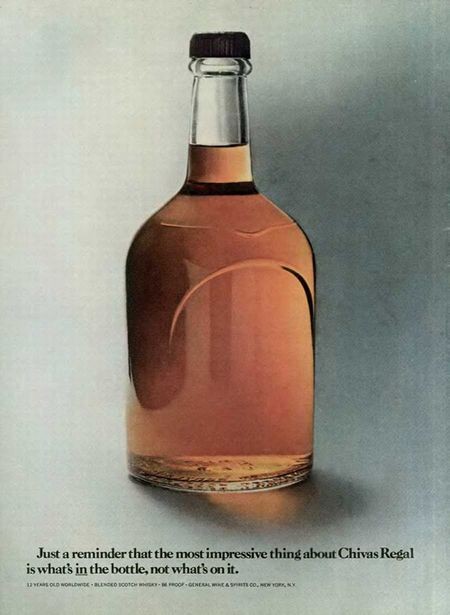 Just a reminder that the most impressive thing about Civas Rigal
is what's in the bottle, notis what's on it. 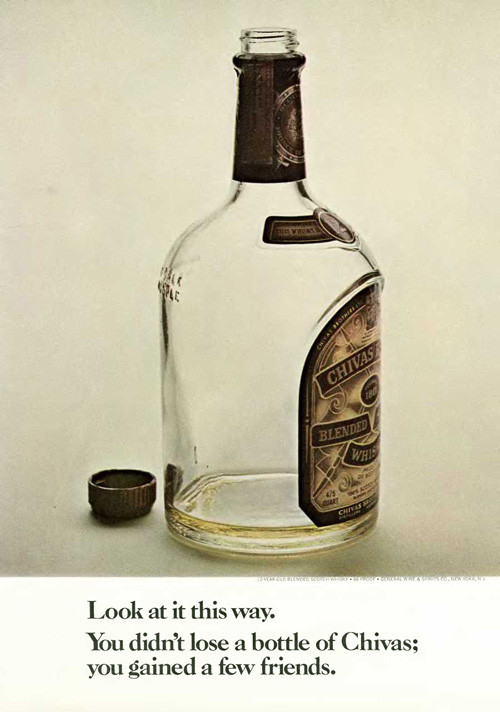 Look at it this way.
You didn't lose a bottle of Civas:
you gained a few friend. 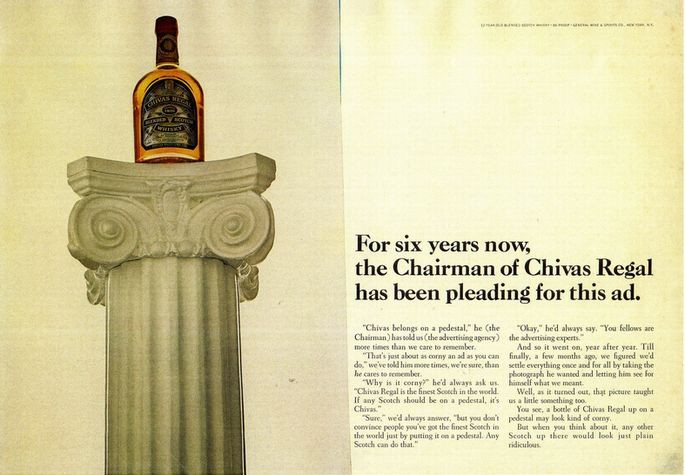 For six years now,
the Chairman og Civas Regal
has been pleading this ad.

"Chivas belongs on a pedestal," he (the Chairman) has told us (the advertising agency) more times than we care to. remember.
"That's just about as corny an ad as you can do," we've told him more times, we're sure, than he cares to remember.
"Why is it corny?" he'd always ask us. " Chivas Regal is the finest Scotch in the world. If any Scotch should be on a pedestal, it's Chivas."
"Sure, " we'd a1ways answer, "but you don't convince people you've got the finest Scotch in the world just by putting it on a pedestal. Any Scotch can do that."
"Okay," he'd always say. "You fellows are the advertising experts."
And so it went on, year after year. Till finally, a few months ago, we figured we'd settle everything once and for all by taking the photograph he wanted and letting him see for himself what we meant.
Well, as it turned out, that picture taught us a little something too.
You see, a bottle of Chivas Regal upon a pedestal may look kind of corny.
But when you think about it, any other Scotch up there would look just plain ridiculous. 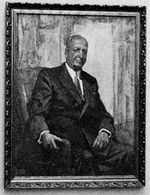 First off, let me say that the ad is absolutely true. Sam Bronfman, rest his soul, for years tried to get us to put his beloved Chivas up on a pedestal.
We naturally resisted.
Then, one day Bert Steinhauser and I had a few ads we really loved killed by him, because, he claimed, they weren't d ign ified enough. In the heat of anger we said, "Okay, he wants dignified, we'll give him dignified. We'll give him exactly what he wants: Chivas up on a pedestal.(portrait:chairman Mr.Bronfman)"
So we did.