INTERVIEWER: What's the work you've done that you're most proud of?

GAGE： I'd say Ohrbach's, Cracker Jack, Polaroid .... within those areas, there are a lot of pieces I'm proud of. I'm not proud of everything I did on them. 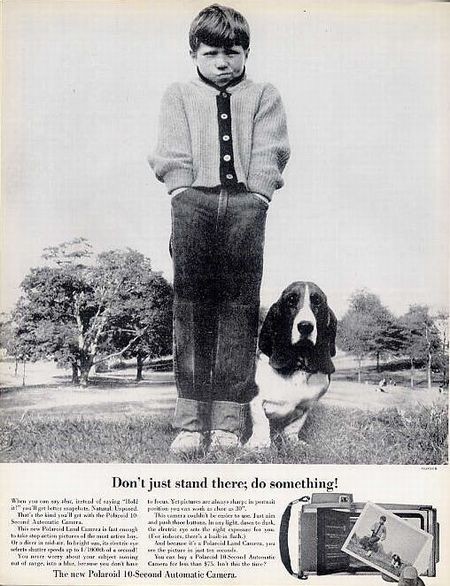 Don't just stand there; do something!

When you can say that, instead of saying "Hold it!" you'll get better snapshots. Natural. Unposed.
That's the kind you'll get with the Polaroid 10Second Automatic Camera.
This new Polaroid Land Camera is fast enough to take stop-action pictures of the most active boy.
Or a diver in mid-air. In bright sun, its electric eye selects shutter speeds up to l!lOOOth of a second!
You never worry about your subject moving out of range, into a blur, because you don't have to focus. Yet pictures are always sharp; in portrait position you can work as close as 30".
This camera couldn't be easier to use. Just aim and push three buttons. In any light, dawn to dusk the electric eye sets the right exposure for you. (For indoors, there's a built-in Rash.)
And because it's a Polaroid Land Camera, you see the picture in just ten seconds.
You can buy a Polaroid lO-Second Automatic Camera for less than $75. Isn't this the time?
The new Polaroid lO-Second Automatic Camera.

INTERVIEWER: These pieces, are they the ones that move people?

GAGE：I don't want to give the impression that every time you do something you want to bring people to tears. You can move people very dramatically. I remember when we did the Polaroid 360, the announcement of the new camera, that was very dramatically written, graphically presented, great music: The only emotion in that one was, "I want that product."

ROBINSON: It still brought goose bumps, but a different kind.

GAGE：It was kind of like a band walking down the street. It moves you through its force.

INTERVIEWER: The SX-70 introduction made everybody want the product.

ROBINSON: That was an intellectual sell, but an emotional one too.

GAGE：The emotion in that... we've been discussing this, and we're still in the area where the emotion is in the product. That generally is not as deep an emotion as you want to get, but it's a damned important emotion to get in letting the product present itself.