INTERVIEWER: Warm is the way people characterize your work, Bob.

GAGE : Phyllis and I worked on Polaroid for a long time, and we realized that you take pictures of people that you love, fundamentally. And so we set out in that direction. We did many spots along that line.
You're limited, you know. If you take life, and it's that long (gesturing), and advertising is only this much (gesturing) of it, then ... I don't think anybody ever made anybody cry in a spot before Phyllis and I did one. I remember the conversation we had: if they do it in an aria, we could take a minute and make somebody cry. So we set out to do that.

ROBINSON: That's right. I remember. Bob was absolutely knocked out by "West Side Story" as I was, and he said, "You know, I've been listening to 'Maria,' and it times out at ３1/2 minutes. If they could do it in that time, we can do it in a minute."

INTERVIEWER: And was it the Polaroid "Zoo" commercial?

ROBINSON: I guess that was the first one.

GAGE : Yeah, "Zoo," and there were a couple of others at the same time. "Train" and "Camp" and "Wedding"--- "Wedding" was a terrific commercial, I wonder what happened to that, I loved that commercial.
But to get back to this life thing, you're limited in what emotions you can put on commercials. You can't have violence or anger or any of that stuff, so you can make them laugh... if you make them laugh and then cry, it's terrific. That's what the great comedians do. 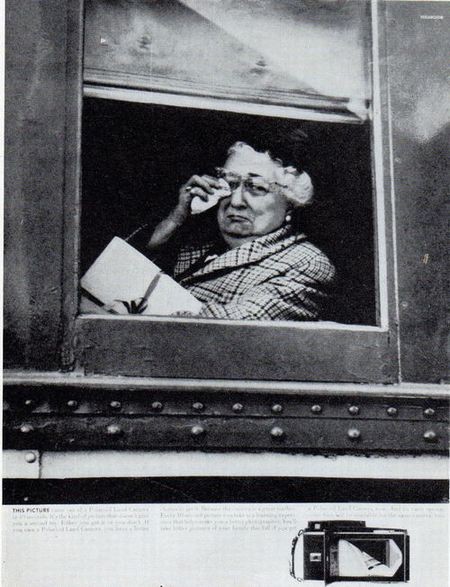 INTERVIEWER: I thought the work was an outgrowth of your personalities. I now feel manipulated.

ROBINSON: Well, one thing that is an outgrowth of our personalities is that Bob and I don't think it's awful to BE warm,
we're not ashamed of warm feelings. And I think a lot of people pull back, are afraid to make use of emotions, are too tight for some reason. I think that is a personal thing for both of us.

ROBINSON: It comes to him more naturally.

GAGE : The greatest wrench is that you finally get that down to a minute and then they shove in the 30-second commercial,
and you're supposed to do that in 30 seconds. I think we've done it in a couple of spots recently, but... I just want to reach people. And I think the way to reach them is through an emotional thing---I don't know whet her it's warmth, but I doh't think you can reach them by being cold.
To move somebody somewhere... not necessarily to tears, but to laughter, with warmth... I think Cracker Jack was a very good thing that was entertaining all the way through and then wound up on a warm beat. It had a nice attitude toward the product.