While it is generally accepted that good little copywriters who never split infinitives, never leave widows dangling and cuss out clients (except when cruelly provoked) will probably gain entrance to Heaven one clay, it is no.t as generally known that great copywriters have already been there.

We asked the winner of 18 awards---including last year's AWANY Silver Key for the best liquor ad---what it was like writing for Doyle Dane Bernbach, where he's a vice-president and copy supervisor. The answer, almost matter-of-fact, came without hesitation. "It's 90 per cent Heaven ... best environment I've ever worked in.
"There are no formulas at Doyle Dane Bernbach," he elaborated, "no restrictions, nobody breathing down your neck. Writers and artists are given thr responsibility to do the job that has to be done---with the freedom to do it their own way. It's a very productive atmosphere."

After a moment's thought, he added: "You might say DDB is sort of an adult Summerhill.

Ron believes that people develop faster in this kind of laisses faire environment. Not only do they give more of themselves, in the long run they become more valuable to the agency.


"Creative people should be allowed to be as free, as inventive, as spontaneous as they know how to be...even altogether wild, if that's the way they want to go. 1t's always easy to pull them back a little, if necessary... easier than making a dull ad more imaginative."

At DDB, writer and artist enjoy an ideal relationship, according to Ron. "It's an absolute partnership, with very little competition, and never any jockeying for credit.
In practice, we're co-writers and co-art directors---two advertising men whose skills overlap. It's never my ad, but our ad. In fact, afterwards, irs difficult to remember who did what."

No writer at the agency ever goes to an art director "with a piece of yellow paper," for it is felt that both must build an ad together. When new client or new product is involved, both begin with a visit to the paint where they talk with research and production people. "This was how the Calvert campaign was horn.

Before a word was writen or a thumbnail skethed, Ron, and art director Len Sirowitz, tourd the Calvert distiller. Len took pictures. Ron took note. "We approached it from the point of view of reporters doing a feature article."
Learning that Calvert was trying to create a new category of whskey---milder, but without lowered proof---the two eventually developed a concept that grewout of the evoving product itself: "Soft Whskey."

Realizing they would have to overcome a body of disbelief among consumers-because of all the not-too-convincing whiskey claims that had gone before---the pair made a deliberate effort to produce an ad that didn't look "addy." "Specifically," Ron explains, We didn't want it to look and sound like an advertising idea, but rather, a product idea. At first, we tried to be visually inventive, but we had to keep censoring ourselves. We bent over backwards to remove anything artificial, to keep layout and copy pure and untricky. We worked extremely hard to achieve a classic simplicity, continually editing out,
stripping down."

Evaluating the success of the campaign ("Soft Whiskey" outsold Calvert Reserve, the brand it replaced, by 30 per cent), Ron pays a rare tribute to his client. 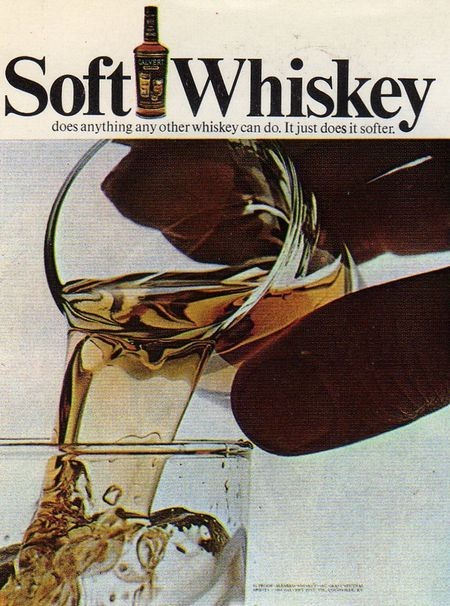 "The distillery took this idea of 'Soft Whiskey~ and really went to work to make it more so. Then they did something almost unheard of-removed every bottle of Calvert Reserve from the shelves, at a considerable loss, and put a coordinated sales effort behind the new campaign." 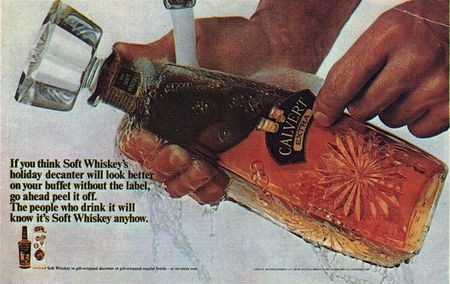 If you think Soft Whiskey's
holiday decanter will look better
on your buffet without the label,
go ahead peel it off.
The people who drink it will
know it's Soft Whiskey anyhow.

Ron considers Calvert one of the most satisfying assignments he's ever had. Another is the Jamaica campaign (also an award winner). "Writing it has given me an enormous sense of personal pleasure," he says. "I like the idea of Jamaica. It's an integrated society that works.
I tried to write about real Jamaica, rather than the usual tourist attractions." 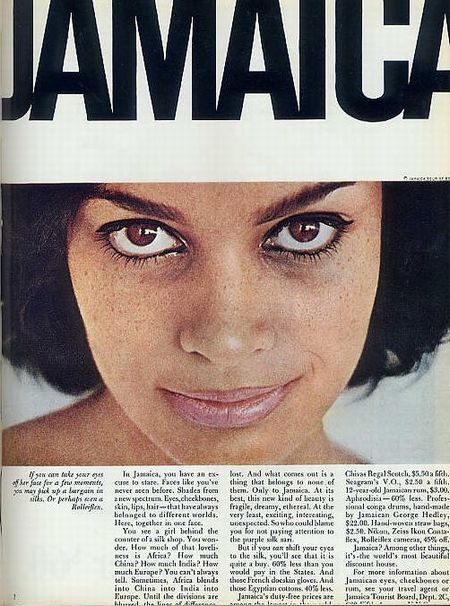 If you can take youe eyes
off her face for a few moments,
you may pick up a bargeain in
silk.Or perpaps even a
Rolleiflex.

In Jamaica, you have an excuse to stare. Faces like you've never seen before.
Shades from a new spectrum. Eyes, cheekbones, skin, lips, hair ---that have always
belonged to different worlds. Here, together in one face.
You see a girl behind the counter of a silk shop. You wonder.
How much of that loveliness is Africa? How much China? How much India?
How much Europe? You can't always tell. Sometimes, Africa blends into China into India
into Europe. Until the divisions are blurred, the lines of difference, lost.
And what comes out is a thing that belongs to none of them.
Only to Jamaica.
At its best, this new kind of beauty is fragile, dreamy, ethereal. At the very least,
exciting, interesting, unexpected. So who could blame you for not paying attention to
the purple silk sari.
But if you can shift your eyes to the silk, you'll see that it is quite a buy.
60% less than you would pay in the States. And those French doeskin gloves.
And those Egyptian cottons. 40% less.
Jamaica's duty-free prices are among the lowest in the world.
Chivas Regal Scotch, $5.5O a fifth. Seagram's V.O., $2.50 a fifth.
12year-old Jamaican rum, $3.00.
Aphrodisia 60% less,
Professional conga drums, hand-made by Jamaican George Hedley,$22.00.
Han-woven straw bags, $2.50. Nikon, Zeiss Ikon Contaflex. Rolleiflex cameras,45% off.
Jamaica? Among other things, it's the world's most beautiful1 discount house.
For more information about Jamaica eyes, cheekbones or rum, see your travel agent or
Jamaica Tourist Board, Dept.2C. 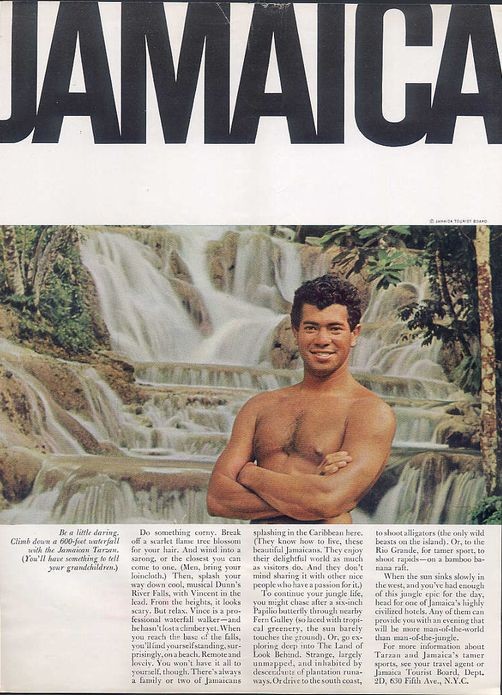 Be a little daring,
Climb down a 600-foot waterfall
with the Jamaican Tarzan.
(You'll have something be tell
your grandchildren.)

Do something corny. Break off a scarlet flame tree blossom for your hair. And wind into a sarong or the closest you can come to one.(Men, bring your loincloth.) Then, splash your way down cool, musical Dunn's River Fall, with Vincent in the lead. From the heights, it looks scary. But relax. Vincent is a professional waterfall walker−−and he hasn't lost a climber yet. When you reach the base of the falls, you'll find yourself standing, surprisingly, on a beach. Remote and lovely. You won't have it all to yourself, though. There's always a family or two of Jamaicans splashing in the Caribbean here. (They know how to live, there beautiful Jamaicans. They enjoy their delightful world as much as visitors do. And they don't mind sharing it with other nice <

Glancing at a list of Ron's print and TV awards (for Thom McAn, Laura Scudder, Rainier Beer, among others), we noted that all were earned at DDB.
"It's the only job I ever held in New York," he explains.

The beginning of Ron's career was neither auspicious nor very original: he started as an office boy. All of 16, freshly graduated from a Baltimore high school where he'd majored in art, Ron went to work in the advertising department of a local store. ("I must have read 'The Hucksters.") Nine months later, he' was fired ("I was a terrible office boy").

Ron's next job bore a title, and a rather impressive one: Advertising Production Manager of The May Co. He was fired ("I was a terrible production manager").Before leaving, however, he learned layout and copy, paving the way for a spot with a small agency that some-how neglected to fire him. ("I did everything-hut got a away from production as fast as I could.")

The Army intervened at this point and, in its infinite wisdom---also because the aptitude test said so--determined to make Pvt. Rosenfeld an engineer. Fortunately, the determination wavered, and the budding engineer was reassigned to Troop Information and Education, which was about as close to advertising as he thought he could get. ("My chief responsibility was cleaning the Day Room.")

Freelancing and job-hunting in New York

Returning to real life, Ron became a writer for a Baltimore agency whose name he recalls with undisguised relish: Applestein, Levinstem & Go1nick Inc. A year and a half later he quit to freelance, which permitted spending Mondays job-hunting in New York. After six weeks, there were two offers---a Miami Beach agency and DDB.
("It took me at least three minutes to make up my mind.")

That was eight years ago. Today at 32, Ron supervises a large group of writers and confesses that he gets a special kick out of working with beginners. We therefore asked if he had any advice for young writers trying to make it with the 4As. He did:
"Be honest with yourself. Write to please yourself. If your intuition is any good, it has to work. If management doesn't dig
what you're doing, get out of there as soon as you can.
"Be like a method actor. Involve yourself with the product. Care about it in one way r another. A computer, for instance might not mean anything to you emotionally, but how about the excitement you felt for that model engine you owned as a kid?
So many ads are unconvincing because they lack this excitement. First you have to be convinced of a product's value---if not to you, at least to someone else:"

One question we put to Ron produced an answer only after a thoughtful pause: When do you compromise and
when do you fight? "If what will appear is visibly compromised, don't do it. But, if it's hidden, or if it's nitpicking,
and you've still got an effective ad, let it go.

However, no agency should let a bad ad run. It doesn't do the client any good, and it doesn't do them any good."
As we parted, one question remained unasked-what about the ten per cent of DDB that isn't Heaven?
It didn't seem to matter. 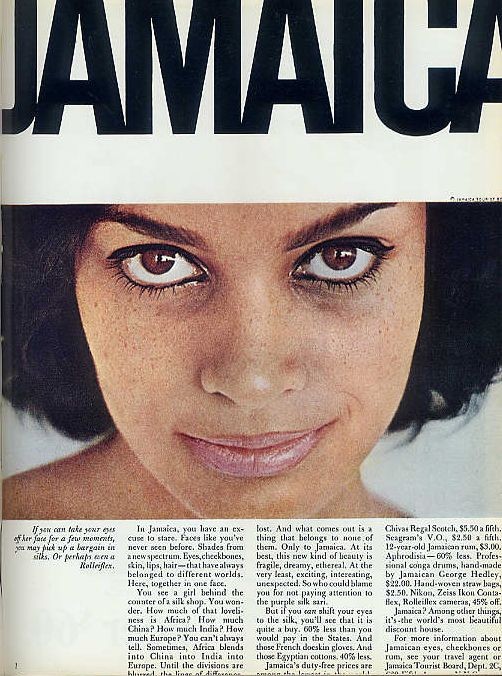