Sirowitz came to DDB with art directing experience at Channel 13, CBS Network TV, Grey Advertising and L.W. Frolich, a pharmaceutical agency. He remained with Doyle Dane for 11 years and though the idea of starting his own agency had always been tempting, the plunge to independence was really a spur-of-the-moment decision. He happened to run into Hubert Graf, advertising manager for Swiss Air who asked if he could recommend an agency for the airline. Without thinking, Sirowitz answered "mine" and thus committed, he recruited Ron Rosenfeld also from Doyle Dane, and Tom Lawson from Ogilvy & Mather.

Swiss Air was the first account of Rosenfeld, Sirowitz and Lawson, Inc. The agency broke the previous advertising mold of dimpled girls and snow-covered Alps and instead featured a bikini-clad blonde with the headline, "Heidi Lied." A campaign for ABC-TV won an Art Directors Club Award. 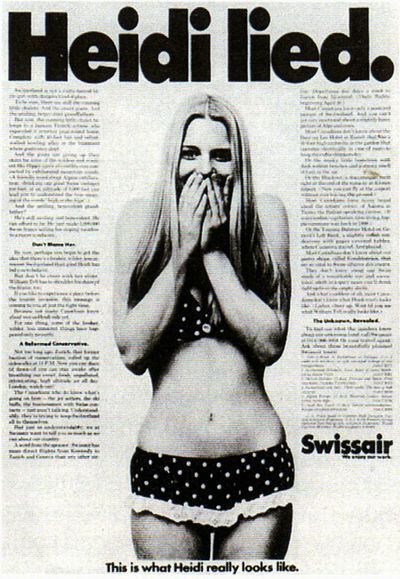 Heidi Lied.
This is what Heidi really looks like.

A recruitment campaign for Pratt Institute which featured successful former graduates, won a gold award in The One Show. As Co-Chairman and Co-Creative Director, Sirowitz has helped build RS&L to over $140 million in billings since 1971. The firm's blue chip accounts include McDonald's, Chase Manhattan, Smith-Corona, Beatrice, Champion International and Charles of the Ritz. In 1979 Rosenfeld, Sirowitz and Lawson was named "Hottest Medium-Size Shop of the Year" by ANNY (now ADWEEK).

Sirowitz's work is persuasive because it is both intelligent and human. The print ads are bold, direct, sometimes humorous, sometimes poignant and always wonderfully thought-out. One of the outstanding features is how perfectly the copy and the art complement each other for maximum impact. It is as if both are conceived simultaneously. In fact, Sirowitz often functions as both art director and copywriter. The succinct headline style of Sirowitz's print work suggests a newsworthy message not to be ignored. Likewise Sirowitz's television commercials are neither technically overpowering nor esoteric but attention-getting by virtue of their clean, compelling style. The human element whether sad or silly, familiar or fanciful, imparts an accessibility which gives the message meaning.

Sirowitz has won over one-hundred awards for creativity in advertising from the New York Art Directors Club, Communication Arts, The Advertising Club of New York, American Institute of Graphic Arts, Saturday Review of Literature, The One Club for Art and Copy, the Cannes Film Festival and the American TV Film Festival. His commercials for Mobil, Volkswagen and Laura Scudder have been permanently installed in the Clio Hall of Fame. Most recently he was awarded an honorary Doctorate of Fine Arts from Pratt Institute where he graduated in 1953. Sirowitz is the quintessential art director, an idea man possessing sharp skills, precise instinct and a passion for his profession.(fin.)