"Give the reader something he's interested in,
and he'll give you his interest in return," 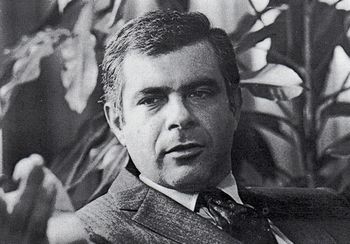 Sandra Karl asks Len Sirowitz some questions about the influences on his career, ad-making, and what advice he has for young art directors.

Q. When did you decide to become an art director?

Mr.Sirowitz Believe it or not, way back in elementary school.
I had a distant relative who was sort of an art director in the advertising business.
I was very impressed with the fac that what he did was seen by millions of people.
And I liked the idea of communicating to so many people at one time.
My mother thought I could draw a little, so she sent me to art school.
I studied Advertising Design at the High School of Music and Art, then went on to Pratt Institute.
After Pratt, I was drafte4 into the army and spent the next two years painting at least 9 million insignias on 9 million helmets.
After being discharged, I got a job in a pharmaceutical advertising agency.
But it troubled me to be working in a place that wasn't doing real advertising.
The art director was just decorating some copywriter's idea (usually bad).
So I packed up my pencils and went to work for Grey Advertising.
I stayed there about a year and a half.
Then I left to work for the late Bill Golden at CBS a very talented A.D. who showed me that an art director can also be a writer and a conceiver of ideas.

Q. Was there anyone else who influenced you apart from Bill Golden?

Mr.Sirowitz Bill Bernbach. I learned a great deal from him.

Mr.Sirowitz How to get to the essence of an idea, how to communicate with people, how to sell.

Q. How do you get to the essence of an idea in advertising?

Mr.Sirowitz It's very difficult to put into words, really.
It's looking, being aware, getting rid of everything that's irrelevant, getting to the point, and presenting your idea in a fresh way so that the selling point will be remembered.
Beyond that, it's coming up with something that people can relate to.
When somebody looks at your ad they should say "Oh yes, isn't that so," or "Isn't that true," or "Oh, I
knew that all the time." But it takes the advertiser to plant that thought in the consumer's mind.
Not a whole brand new thought, one that he's never related to before, but something familiar presented in an unusual and compelling manner.

Q. Some of the outstanding campaigns you've done, such as Mobil
and Better Vision sell more than a product.
Better Vision sells having your eyesight checked and the Mobil campaign sells the concept of safety on the road ...

Mr.Sirowitz (Interrupting) No. Actually,
Better Vision's purpose was to sell eyeglasses.
Mobil's purpose was to create good will which in the long run has to sell some gas, too.
We just did it in a different way.
In both campaigns, we gave the reader a service.
We did something for him.
We gave him something and he responded.
In fact, every good campaign besides having the shortrange purpose of selling the product should have a long-range institutional effect for the advertiser.
Give the reader something he's interested in and he will give you his interest in return.
If you show you care about people, people will care about you.

Q. What would you do if you weren't an art director?

Mr.Sirowitz I don't know how to answer that.
Maybe open up a candy store?
I've always been an art directorever since P.S. 80 in the Bronx.
And I love it because the art director has the greatest amount of control, even more than the copywriter, in producing a television commercial or an ad.
If an art director doesn't like an idea the copywriter suggests, he just doesn't do it.
As long as I own the pencil and the drawing pad, it's with in my power to put it down or not to put it down and that's why I like this end of the business.
If the idea isn't suitable, it simply doesn't get put down.

Q. Would you say then that the copywriter is pretty much at the
mercy of the A.D. ?

Q. Do you feel that it's the visual that will stop the reader?

Mr.Sirowitz No, it's the idea and how it's expressed by the words and the visual.

Mr.Sirowitz Because of the emphasis on concept, which is obviously the most important part of the job, too many young art directors forget that they are also art directors.
They don't acquire a strong and varied graphics background.
They don't experiment enough.
When they design an ad, they don't know how to focus in on the idea, milk it and get the most out of it. That's because they haven't fully mastered the techniques: layout, typography, photography and film. They don't know the full range of what's open to them, so their solutions tend to be safe and mundane
and derivative.

Mr.Sirowitz When everyone else zigs ... zag.