DDB NEWS' June 1969 issue---20 years ago, 13 people came near on June 1, 1949 and a small advertising agency was woken up.
The agency grew up at the unprecedented speed 20 years later. It is because the number of enterprises that resonate to the creative philosophy of this company increases rapidly. The philosophy was "Create the advertisement that was not able to be forgotten when it was possible to believe, and it saw once.
"Moreover, "It is artistic. "Of course, there is no what it is directly connected to sales because it is an advertisement up to saying.

Well, 20 years passed. The key creators give one point and talk about one person recommending by him/herself work with high effect to over "Period the 20th anniversary name of an era". --- has stripes by this serial since yesterday.

One of my favorite ads is "Till death us do part."
I like it because it's one of those ads that goes beyond selling a product.
It's one of a number of ads where I've had the opportunity to use my craft to do a job beyond the job.
The morning the ad ran, I heard Bob Levenson's copy read verbatim on a radio program.
That kind of thing is the real kick in this business. 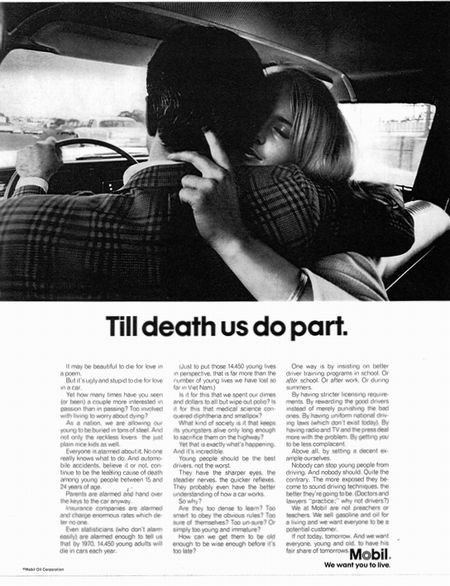 Well, Mr. Bob Levenson, it's the copy and art directing are by himdself, advertisements of Tom McCann's shoes.
Though it's a rough sketch---｡

Shortly after I came to Doyle Dane Bernbach, I had to do a newspaper ad for Thorn McAn Shoes.
They were having a very good sale.
I wanted to prove that I didn't need any help, so I drew a picture of a shoe.
And then I drew a mast.
And then I drew a sail on the mast.
And then I wrotea headline.
It said "Shoe Sale."
I showed it to Bill Bernbach who immediately offered me an interest in the business.
He said, "Look Kid, ei1her you take an interest in this business or out."
I still worry about that quite a lot. 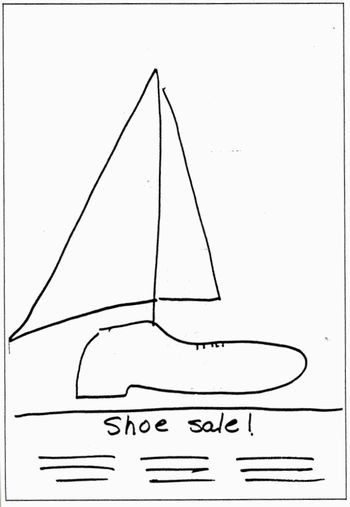