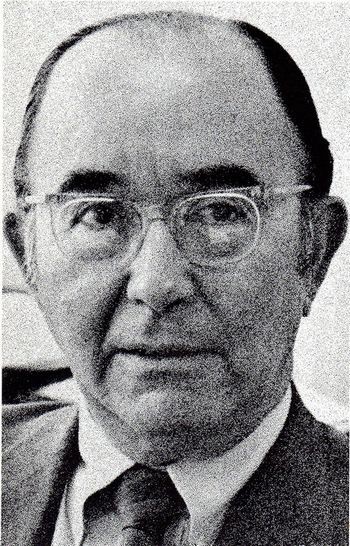 A Conversation
with
Mac Dane

Founder and the former person in charge of Manageent Dept.
(retired in 1971)

INTERVIEWER: So here you are 20 years later. What were the surprises?

DANE: That we're still in business. After all, when you start you never know what's going to happen.
Certainly none of us ever felt it was going to be this successful.

INTERVIEWER: Do you know what the mortality rate of new agencies was at that time?

DANE: Sometimes ignorance can be bliss.
Actually I don't think there are any reliable statistics.
Many people go into the agency business as a one or two man operation, and never get any
further.
Before teaming up with Doyle and Bernbach I'd had four years of experience in running my own small agency where there were eight to ten people.
I was president, administrator, new business man, copy chief, art director, media director, troubleshooter, etc.
And you realize that's a tough way to make a living.
You have no time to get sick.

INTERVIEWER: Did you think, when you went in with
Doyle and Bernbach, that this was going to be a different kind of an agency?

DANE: That's impossible to answer. We had some goals. Doyle and I had worked together for several years at Look Magazine;
we'd become friends.
I knew Bill Bernbach only through introductions from Ned Doyle, and I bel ieved that Bi1l could give the agency a new creative flair. Naturally, I was familiar with the ads
he had been doing for Ohrbach's.

NTERVlEWER: But did you think that this was going to be A Creative Agency? Was that the idea?

DANE: Well it wasn't as simple as that.
We were going to do the best possible creative work, obviously.
We started with a creative team of Bill Bernbach, Bob Gage and Phyllis Robinson, all of
whom had impressed me tremendously.
But in that era agencies weren't catalogued as creative, or merchandising or research agencies.
An agency did a complete joband the greatestdifferentiation was size.
Some. were big, some. were small.

INTERVIEWER: But as DDB became successful and creativity became the key word on Madison Avenue, many other "creative agencies" were started, almost all of which were opened by two or three creative people.
Yet it seems to me that what made this place go was the fact that there was one creative man on top, with a strong creative philosophy; one man in charge of account services; one man in charge of finance and administration−and that this may be the better way to run a creative agency.
Why has everybody missed that point?

DANE: I don't know that everybody has missed it.
Sometimes it's luck and compatibility as well.
Initially I didn't come in as a financial and administrative "genius."
In the early days you had to double in brass.

Hell, who needed an administrator when you had a grand total of 13 people on staff.
Part of our job−all of ours−was to get new business, to personally do as much of the work as we could to keep the payroll down.
No one else would work that cheap.
While Bill and his crew were doing the creative work, the rest of us were devoting our time to gett'ing new business and to servici the few accounts we had.
It wasn't until much later, as the agency grew, that there was a jobfor an admistrator, financial expert and part-time public relations man.
My credentials might have been suspect since I had once earned a livelihood as a copywriter and account executive.

DANE: No, it wasn't brilliant foresight.
Starting as a oneman agency, I had to be a jack-of-all-trades, and to understand the problems of creative people, account people and service people.
One of our first tenets was to make th is the kind of agency where we ourselves would like to work.

INTERVIEWER: Lately we've been buying companies. Are
you going to turn us into a conglomerate?

INTERVIEWER: You said earlier that in starting, you wanted DDS to be the kind of place you'd like to work.
Would you say that's been the basic philosophy all along?

DANE: I would say it's been as basic as anything can be.
To try to describe a philosophy in a half dozen words is impossible.
A philosophy stems from performance, not from policy statements.

INTERVIEWER: Has going public made a difference to your own job?

DANE: Sure it's made some difference. It has educated me to the problems of going public, to the SEC, to the opinions of
security-analysts from Wall Street who were completely unsophisticated about the agency business.
Their first reaction was that there's a tremendous turnover of clients and personnel.
I had to refer them to the figures of the top agencies.
It's true that they lose accounts, but they also gain accounts.
Accounts rarely disappear into thin air.
Over the past 20 or 25 years most of the bigger agencies grew at a faster rate than the economy as a whole.
If the losing agency has done a reasonably good job it will pick up another account in the same field sooner or later.
Shall I add, the sooner the better!

INTERVIEWER: How about any differences going public has made to the agency-how it operates, the atmosphere, anything?

DANE: It certainly has not made any difference in our atmosphere or in our creativity.
But we're a little more conscious of running a tight ship. By that I mean one in which there isn't flagrant waste.
It's not possible to run an advertising agency or service business without some waste or inefficiency.
But you 'can't run it slipshod.

You have a responsibility to agency people who own stock or stock options and benefit only if the company does well.
Also there's an obligation to outside stockholders who have invested in the agency.
And, of course, there's the primaryobligation to our clients.

INTERVIEWER: One theory I've heard is that once you've gone public you have, so to speak, shot your wad as far as the benefits to your employees are concerned.

DANE: That really isn't true because an agency going public is able to expand the ownership.
More people are shareholders or option holders than in a privately held company.
In the long run the benefits to individuals depend on the agency's progress but that's true of any agency-public or private.

INTERVIEWER: Everybody was fascinated to read in a New York Times interview with Helmut Krone that had he stayed, his DDS stock would have been worth a million dollars in four or five years.
Would you care to comment on that?

DANE: I tried to learn from Helmut where the number came from.
It actually stems from his great faith in the future of DDB and that consequently the stock will some day soar in value.

INTERVIEWER: In the same interview, Gene Case and
Helmut spoke of wanting to have a shop without a bureaucracy.
At DDS, would you consider yourself the bureaucracy?

DANE: I hope not. We've always had an open door policy.
People have access to the supervisors and principals on little or no notice. We try to be sympathetic to their needs and requirements,
and not always go by the rule book when there are special problems.

INTERVIEWER: This is a very unlikely building for a glamorous advertising agency. How did you find it and why are we still here?

DANE: That's the first time I've heard anybody refer to us as a glamorous agency. But disregarding the wise-crack, it happens to be oneolthe smartest decisions that we could have made.
We came into this building 15 years ago, having rented 8000 square feet of space−the north part of the '26th floor.
We now have between 225,000 and 250,000 square feet in the building, most of it on contiguous floors.
There isn't any other building where we could have expanded in a similar fashion.
Our landlord (with all his faults) gives us first call on any space where a lease expires
so we can get a beachhead on the floor, a Iittlelateranother few hundred feet, and then a year, or two later (if we require the space) we eventually wind up with the whole floor. While I recognize that there are many, many things wrong with the building, the great flexibility it has given us during a period of growth has been of immeasurable help in enabling us to work with minimuminterruption.
And I might point out some of the other large agencies- the more successful ones-have continued in their quarters for very long periods of time.
J. Walter Thompson is still at 420 Lexington Avenue.
BBDO is still at 383 Madison.
Young & Rubicam is at 285 Madison.
They've been there for many, many years. Moving a large advertising agency is tremendously costly and full of logistical problems.
And, need I add to my friends, I also like the fact that our rent is not out of proportion to income.
Agencies who've had to move into new quarters and pay anywhere from 50 to 100% more for space are going to have to take it out of something, somewhere. No?

INTERVIEWER: I know you've re-done the 25th floor and are redoing the 24th, but I know of a lady copywriter who left here because she couldn't stand the looks of her exposed radiator.

DANE: Well, I didn't like her exposed radiator either．