chuukyuu What do you think atmosphere of Doyle Dane Bernbach?

Mr. Dillon Oh, I think there are a lot of young copywriters and art directors here who are aware of Doyle Dane Bernbach atmosphere with out even realizing they are aware of it. In many agencies, either openly or subtly, the creative work is pretty much under the thumb of account executive.
This is perfectly understandable. The account exesecutives are the men who deal with the source of the money, the client. When they say a client will or won't buy something, it's hard for creative people to persuade them to give it a try. You might say the management makes these account men specialists in keeping the account, not doing anything to upset the client.
In this agency, whether or not a client will buy something is simply not a common guideline for writers and art directors. The times when this is a valid criticism are when marketing considerations are in conflict with the ad. For example, we might come out with a very creative ad on American Airlines' new fares---lets say, 'It took American to think of leaving you with some money when you get there.' The account man could point out that all airlines will offer the fare at the same time. You can't argue with that. On the other hand, if the account man didn't like the campaign we did for American's first class cabin, he simply would not have the final authority to kill it. The final word is Bernbach's. But before it gets to Bernbach, there's Bob Gage. Bob is our creative director and also the art director on American. There's also Marvin Honig, the copy supervisor on American. These are all creative people.
One of the advantages for writers here is that they know they're working for people who appreciate copy.
Another advantage is that they're working for an agency that was built by its own ads. When we believe in an ad, our account executives go out and fight for it.
Now, what about good ads that a client simpiy will not run? There's a myth that when that happens, we resign 18 million dollars because the client turns down an ad.
We simply do another ad and try to make it better than the one that was killed. Here, however, is one of the big differences in working at Doyle Dane Bernbach, We do another ad---the client dosn't do it himself. We do not come back from the client with instructions on how to do advertising.
There are the things that make the atmosphere at Doyle Dane Bernbach a good one. Sometimes I wish that all the writers who work here had worked at some other agency first. You don't really know what freedom is until you've been in prison. 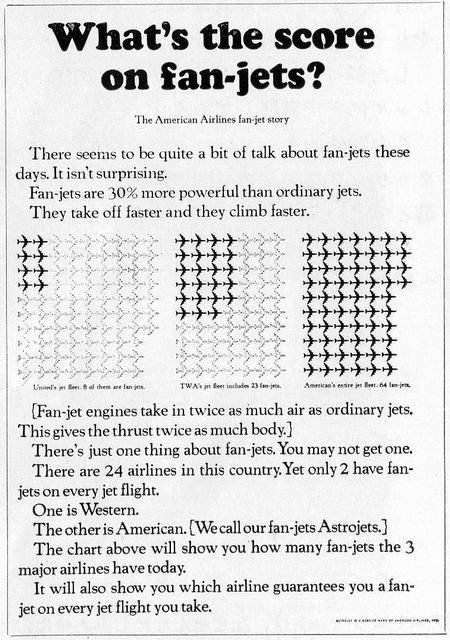 What's the score on fan-jet?