chuukyuu When did you join Doyle Dane Bernbach and how much did it bill then?

Mr. Meadow I joined Doyle Dane Bernbach in 1956. The agency then billed 20 millions, it has grown over ten times since I have been here. When I joined I think there were no more than ten writers in the copy department.

chuukyuu Did you joined Doyle Dane Bernbach just after you had given up being a story writer or did you have experience in other agencies?

Mr. Meadow I had been with a number of agencies before. On the other hand I also have done a certain amount of what you call story writing as well. That is, I wrote some short stories for New Yorker magazine and I also did some radio and some television scripts.

chuukyuu Are there any reasons why you joined Doyle Dane Bernbach?

Mr. Meadow There certainly was a particular reason why I chose Doyle Dane Bernbach. At that time the agency was about seven years old and already earned a tremendous reputation as one of the really progressive, new thinking advertising agencies in the business. It was a great honor to be a member of the copy staff, as it still is today.

chuukyuu How is it different to be copywriter at Doyle Dane Bernbach from being a fiction writer? Both are involved in writing job but I think there are some differences between story writing which is solitary occupation and copywriting which is collective one.

Mr. Meadow I do not want to go into the comparative natures of regular story writing with that of copy writing at great length since I think that it is in a way irrelevant to the interview, but I will say this. Story writing, script writing, copywriting are all forms of professional writing that require their own levels of competence and their own disciplines as regards the crafts involved.

Obviously there is a special difference between working on your own as an independent writer and working as a copywriter who deals more with collective operations on the creative scene.
I found when I wrote for radio and for television that while the creative process itself was done in a solitary fashion, you did have to get together with directors and actors and in this sense it became a collective action. I think that in copywriting the actual writing of the text is again solitary occupation. You cannot write body text as a corporate venture. Of course at Doyle Dane Bernbach, the art directors and copywriters would never think of doing their own concept thinking. We always do this as a team, together. 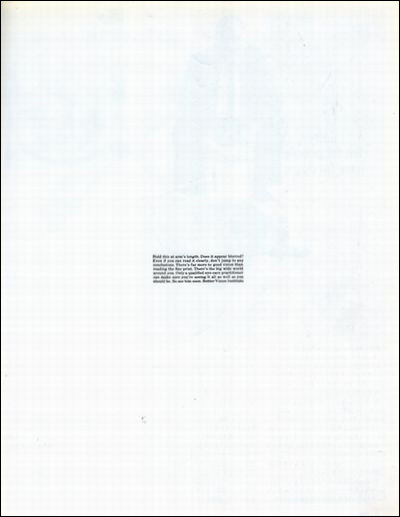 Hold this at arm's length. Dose it appear blurred? Even if you can readit clearly, don't jump to anyconclusions. There's far more to good vision than reading the fine print. There's the big wide world around you. Only a qualified eye-care practitioner can make sure you're seeing it all as well as you should be. So see him soon. Better Vision Institute