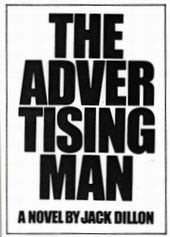 (Jack Dillon's new novel, "The Advertising Man," was published a few months ago and immediately became must reading on Madison Avenue. Sufficient reason for an interview with VP-Creative Management Supervisor Dillon.)

INTERVIEWER: You've written other books. But this one seems to have gotten greater attention.

DILLON: Yes. It's the subject matter, I
suspect.
I wrote a Western---a very good one, too, I thought, about 1954.
After that I wrote a novel about integration.
That was before the word integration was current.
It had to do with a black family moving into a white neighborhood.
It was a hardback, and it got swell reviews, but nobody wanted to buy it.
I've since wondered how smart I was to think I could put myself into black shoes.
Then I wrote a thriller called "A Great Day for Dying."
That was a paperback. And then this.
I think this material is more for hardback sales.
I guess it's more contemporaryand more ... if you want to use the word ... serious than a thriller.

INTERVIEWER: But there've been many novels about the advertising industry, and nothing much happened with them. This one seems to be taking of!

DILLON: I think there was only one novel about the advertising industry, and that was "The Hucksters."
I'm not familiar with "The Man in the Grey Flannel Suit" but I understand that was about public relations, and not really about the business of P.R., but a fellow's personal confrontation with himself.
It was not a novel about the workings of an ad agency.
Actually I don't think "The Hucksters" was either.

INTERVIEWER: That surprises me.
Considering agencies are filled with writers....

DILLON: There aren't very many people in the agency business who write fiction.
There are a few, but I have a feeling that for most of them advertising just isn't the subject they want to write\ about.

INTERVIEWER: Yet the subject seems to have grabbed the reviewers. They really liked your book.

DILLON: Several of the reviewers said they'd picked up the book expecting to hate it.
Another novel about Madison Avenue.

INTERVIEWER: Then there have been a lot.

DILLON: No. People think there have been.
You get some Cary Grant and Tony Randall advertising in the movies, which bears no resemblance to the business.
And I suspect it's a combination of that and the few books thre've been that give the impression of lots of novels about Madison Avenue.
Anyway, reviewers are on the intellectual side and I think that they tend to look down on advertising.
I think they might just have been surprised to find that people in our business work, and aren't just making scads of money thinking up jingles between martinis.
I think they also might have been surprised at the story, that maybe there was more to it than they expected.
I think also that probably they feel that advertising is a mysterious business.
From the outside you don't really know what's going on inside.
There've been many books about Hollywood and most people probably feel by now that they know what goes on there.
But in advertising that isn't true, so I think maybe the reviewers found some value in that.
The plot brought on some questions.
The story's about a new agency president who's tied to research, versus creative.
And because interviewers are on the outside they'll ask me if this is a common conflict.
And the answer I've tried to give is, usually an agency has a posture about this sort of thing.
It's not likely that you'd find an agency as totally wedded to research as the president of this fictitious agency is, with that kind of a creative department.
Because one or the other wouldn't be there.
But for purposes of the story, it works.
I get asked questions like that.
And I get asked, what's the matter with research, it seems like a sensible way to do business.
And the answer to that is it IS a sensible way to do business, and everybody uses it.
It's a question of knowing when to let go.

INTERVIEWER: The essence of an interesting conflict is that there are strong arguments on both sides.

DILLON: Many people, including Bill Bernbach, think I made a better case for the research-minded president than I did for the copy chief. And you can't knock success.
The man was successful, doing things the way he did them.
As far as I was concerned, the problem was he did not trust intuition, and intuition was this creative place's stock in trade.
He wouldn't trust anything that could not be documented and tested and proved out ahead of time.
And you can't always do that.

INTERVIEWER: Let me ask you a Johnny Carson-type question.
How has your life changed since you appeared on this show?

DILLON: It's got terribly busy.
I've been on assorted interviews that the publisher has set up, for the most part.
And I find these very tense.
I guess my bit is writing, not performing.
And also the interviewers ask me questions that properly would belong to a Bernbach or a Daly, but I'm there, and I do my best to answer them.

INTERVIEWER: What kinds of questions?

DILLON: For example, what's the story on Alka-Seltzer.
They-and these are book reviewers, or hosts on talk shows-tell me that they hear that Alka-Seltzer is in trouble and creativity isn't working.
My answer to that is maybe the reason Alka-Seltzer is still at $60 million in sales is because of the creativity, which is holding sales up rather than keeping them down.
I feel comfortable saying that because it's not self-serving; we don't have the account anymore.
The people who ask the questions have a surprising awareness of the business.
But most of the people in the audience are probably housewives.
I try to answer the questions as honestly as I can, but as simply as I can.

INTERVIEWER: Do any of them ask you whether the book is about DDB?

DILLON: There's been a great guessing game in the agency about who was this and who was that.
My answer has been that nobody who recognizes himself will get sore.
I have not been asked literally is this DDB.
I have been asked how the people in the agency feel about it.
And by and large, they seem to be getting a kick out of it.