Phyllis Robinson has been elected the eighth member of the Copywriters Hall of Fame by the Advertising Writers Association of New York.
She joins Bill Bernbach, David Ogilvy, Leo Burnett, George Gribbin, Rosser Reeves, Julian Koenig and Bernice Fitz-Gibbon among advertising's immortals.
Phyllis, who writes for Polaroid and Clairol, was honored for her major influence on contemporary copywriting through her own writing and., through people she has−−−trained.
She's pretty good at speeches, too. Viz. the following, the main portions of her acceptancespeech at the Hall of Fame ceremones.
(in "DDB NEWS" july issue 1968) 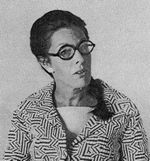 In the early days of DDB, everybody on the outside was very hot to know how it was on the inside.
How did we do it?
So we told them.
Bill told them.
And told them.
And told them.
So then they knew.
And what happened?
Whole agencies introduced their copywriters to their art directors.
They'd never met before.
The way I understand it, the writers used to put the copy in those pneumatic tubes they used to use in department stores, and it would scoot over to the art director to be "laid
out."
So-the agencies introduced them, and left them Alone Together.

And they gave them Freedom.
They said, make, do, create!
Break rules!
And you know what?
A lot of very fine stuff started to come out. Some not so fine. But a lot that was.
Aha, everybody said, that's it!
Freedom. Freedom was the answer.
But you know something?
Freedom is only part of the answer.
Freedom is the atmosphere.
A lot goes on within that freedom.
One thing that goes on (and this may sound strange coming from a pioneer in irreverence
in advertising) is respect.
The respect, first of all, of one human being for another−a respect for his ideas, his opinions, especially if they differ sharply from your own. (It's very easy to respect an idea that's identical with yours.)
So we start with:
Respect for the guy you work with−for his ideas, however foreign to you, however crude or tentative.

Respect for him even if he talks funny or you don't like his ties or he never went to college or his hair is too long (or too short) or his skin is an unaccustomed color. Respect for the other guy's idiosyncracies and work habits.
This is a very intimate situation, writer and art\ director working together.
You sometimes have to sit through long embarrassing silences, listening to each other's stomachs growl.
And sometimes you have to wade through a lot of irrelevant talk.
In a really free creative atmosphere, you have to have a profound respect for each other's free associations, no matter how preposterous or tiresome or irritating they are.
Because out of this bubbling and babbling might
come a great idea.
You have to have respect for the young and totally untrained.
In our business, even a clever child−if he has the brains to grasp the essential selling problem−can sometimes intuitively
find the answer−sometimes a brilliant answer−that a more experienced mind may not have the freedom or agility to find.
It includes a respect for grayer heads too.
Creating great advertising for twenty years doesn't necessarily turn you into an old fuddyduddy.

Respect for your superior is part of this attitude, too, even though you may not think that word fits him. (Let's face it, every boss is a Daddy, and who among us doesn't
have mixed feelings about Daddy?)
So−that respect involves an ability to separate any personal disagreements,
any gripes, and let's not exclude envy, any of the baddies in your relationship, from the goodies, which could include his knowing something more than you do, or seeing something more clearly than you do.
I'm talking about respect for the client's opinion too.
After all, if you have pride in your agency, and if the client was smart enough to choose your agency, he can't be a complete ninny. The client might Just be smart enough to find a flaw in your thinking-or, God forbid, in your writing. I'm talking, too, about−
Respect for the new voices clamoring to be heard. (They're not all at the Sorbonne and Columbia, you know.)
When the angry young men and women in your agency start attacking what they see as The
Establishment− even if they're blunt, foolhardy, even destructive in their criticism, it doesn't make sense to suppress them, to call in the cops.
You listen.
Argue with them, contain them, control them, fire them if you think they're really destroying your agency or your agency's product, but for heaven's sake listen.
Things are moving so fast these days-even in advertisingthat yesterday's radical is today's
conservative.
Listen to the new voices, because in spite of rudeness, arrogance, naivete, they just might
have something important to say to you.
And if they do, use it.
A little shaking up never hurt a healthy organization.
And the organization that isn't healthy needs it desperately.
I'm talking about respect for your work, too.
I pity the advertising writer who hates his job, who has contempt for advertising.
What's he doing in this business?
How does he sleep at night? How does he work during the day?
How does he live with himself?
Why doesn't he get out of the business?
Or change what's wrong with the business? I have a funny hunch that some of these guys think advertising stinks just because it's lucrative.
If it stinks for you, it's because you're not doing your job right, or you're in the wrong agency, or the wrong business, or you haven't tried hard enough to turn it around and make
it right.

Most important, 1'm talking about respect for yourself.
It's amusingand, as the fellow says, flattering to see all the imitations of what people
like to think of as the Doyle Dane Bernbach style.
But that amusement has a sour aftertaste.
Why does anyone want to copy?
It's a kind of cheating.
I'm not talking about cheating the guy you're copying.
After all, if you diminish the effectiveness of his advertising by copying his style or his ideas, that's part of the game, part of the competitive system.
But you cheat the consumer of a fresh image about the product, a new way of looking at something.
You cheat your client, for the same reasons.
And you cheat yourself.
Sure, we learn from others, we're all influenced by everything we read, see, hear.
But the writer who doesn't make every effort to express himself, to fulfill his own potential,is cheating himself.

One point about DDB a lot of people seem to miss, is that we didn't set out to make a lot of little Bill Bernbachs and Bob Gages and Phyllis Robinsons and so on. (I think Bob Gage pointed this out recently.)
In fact, we fough against doing that. One reason we've flourished and prospered is that very early in the game, we started to introduce important new strains−Dave Reider,
Helmut Krone, Bill Taubin, Ron Rosenfeld, Bob Levenson, I could go on and on ... If ever there was a group that was not stamped out with a cookie cutter, it's the creative
people at Doyle Dane Bernbach.
Believe me, everyone of them is an original, and every new strain that comes in, every crossbreeding of these strains, makes for a fresher, healthier creative product, and makes the agency stronger.
We're all originals, yes.
But the point is that every soul in the world an original.
There are no two a ike, in their genes, in their experience, in the way they integrate that experience and use it.
The trick is to tap those unique resources, free them, give them room to breathe and live.

Another word about respect for oneself.
We've all deplored, in the theatre and in TV programming, the chickenhearted attitude that
brings us copies of copies of copies of success, season after season−successes that were sometimes not even very good to start with.
Meanwhile, we congratulate ourselves on how much better the TV commercials are than the shows−and certainly in some respects that's truebu look at the copycatting that goes on in our field!
Do you think we've finally seep the end of the Rififi eommercials, and the Bonnie and Clyde commercials, and the discotheque commercials, and soft dissolve commercials, de fellows dat talk funny commercials, and the lady comediennes making idiots of themselves? Maybe.· Next year in commercials it's going to be all psychedelic Happenings and Italian counts, right?
Respect for the audience, of course, is one of the ba,sic tenets of our advertising philosophy.
And not only ours; David Ogilvy said it so well some years ago: the consumer isn't a moron; she is your wife. And today your wife is better educated, better informed,..smarter,
more savvy, more sophisticated than ever before.
A lot of writers in a lot of agencies have grown up to the level of their audience, but some of them are still insulting the American public every time they sit down at a typewriter.

I've talked about some of the things that are important to me in my work.
I wouldn't have the arrogance to say that we at DDB have a monopoly on them, nor even that
all of us practice them every day in every way in every corner of the agency.
They're just some of the unwritten rules by which we work.

And I can tell you, they create a very healthy atmosphere for getting things done.
This looks like such an experienced and wellpaid group, I don't know if there's anyone here who can still use a little advice.
If he's out there somewhere−maybe his supervisor got sick at the last minute and he got his ticket−here's the advice.
Don't look for the magic formula, Doyle Dane Bernbach's or anyone else's.
Search yourself, dig out your own talent, free your own creative energies.
That's where the excitement is for writers in this business.
That's where the gratification lies.
Find yourself, and as Shakespeare said a long time ago, "Do your own thing."