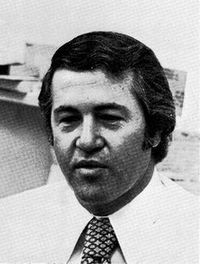 "Bert Steinhauser is always fresh, always trying for something new. And he's got such excitement."
That's what a fellow art director said a while back when the DDB News interviewed a panel of art directors about the people they've learned the most from at the agency.
And it's exactly that freshness, that striving. for something new, that excitement, that led to the appointment of Bert as Head Art Director of DDB.

"My role will be to work with the art directors," said Bert, "to get them excited about print. To improve the
graphic look of the agency, both in print and in television.

"I have no single way of teaching What I do have is enthusiasm for graphics, and the hope is that some of that will rub off on the younger ADs. Since so much of advertising these days is television, many of the young ADs have had very little experience in print.
Nor have all of them cared much about it.
This agency wrote the book on print advertising.
When I came here, 18 years ago, we were entirely a print agency. I learned about graphics here. We learned from each other.
And Bill Bernbach used to walk from office to office of the art directors.
He so often served as a catalyst for a new way of looking at something.
"I hope to do something like that.
Walk from office to office, and try to help the art directors to see something in a new way.
We do a great deal of very professional graphic work in this agency-but perhaps we could do more that is stimulating and innovative.
There could be more experimentation in our graphics. "

Bert believes that print separates the men from the boys.

"Bill Taubin said the other day that when an AD brings in a portfolio, he, Bill, looks at the print ads first. If Bill doesn't like what he sees in print, he won't look at the AD's reel."
As graphically exciting as Bert's work has always been, he has never taken his eye off the ball of selling the product.
He has often been quoted as saying: "I probably can get Andys and Clios if I try for them, but I'd much rather get good Nielsens. That's what it's all about."

He has often been quoted as saying: "I probably can get Andys and Clios if I try for them, but I'd much rather get good Nielsens. That's what it's all about." 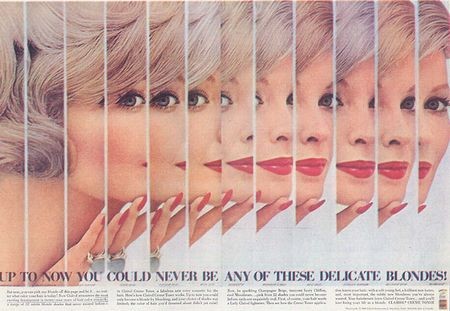 UP TO NOW YOU COULD NEVER BE ANY OF THESE DELICATE BLONDES!

But now, you can pick any blande off this page and be iy...no matter what color your reserahaior is today! Now Clairol announces the most exeiting developmenttewentesquisitelyy-nine years of hair color 22 e research: a rang of 22 subtle blonde shades that never existed before-in Clairol Creme Toner, afabulous new color cosmetic for the hair. Here's how Clairol Creme Toner works.Up to now you could only become a blonde by bleaching, and your t choice of shades was limite ; the color of hair you'd dreamed about didn't yet exist!
Now be sparkling Champagne Beige,innocent I vory Chiffon, cool Moonbeam...pick from 22 shades you could never become befor, each one exquistely real. First, of course,your hair needs a LadyClairollightener. 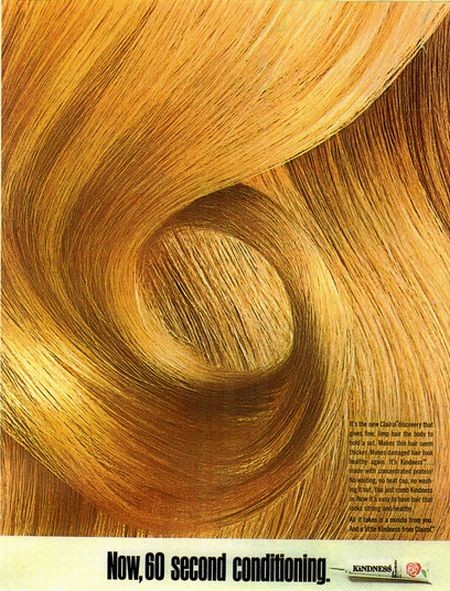 It's the new Clairol discovery that gives fine, limp hair the body to hold a set. Makes thin hair seem thicker. Makes damaged hair look healthy again. It's Kindness ---made with concentrated protein!
No waiting, no heat cap, no washing it out. You just comb kindness in. Now it's easy to have hair that looks strong and healthy.
All it takes is a minute from you. And little Kindness from Crairol. 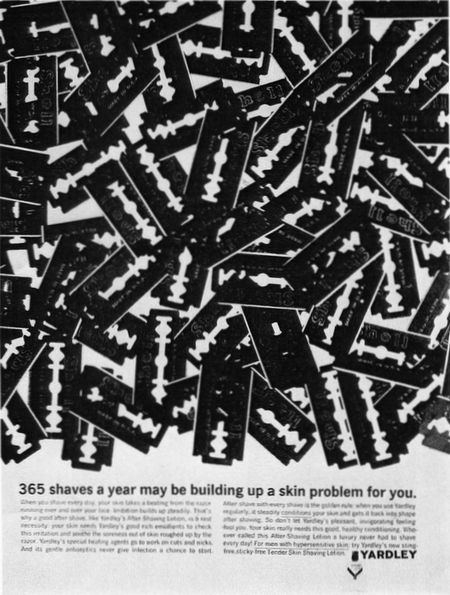 365 shaves a year may be building up a skin problem for you.

When you shave every day, your shin take a beating fom the razer runing over and over your face, Iritation builds up steadily.That's why a good aftershave like Yardley's After Saving Lotion, is a real necessary. 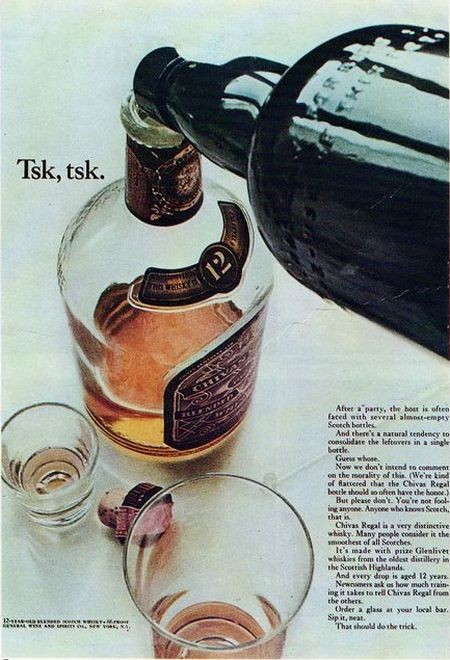 After a party, the host is often faced with several almost-empty Scotch bottles.
And there's a natural tendency to consolidate the leftovers in a single bottle.
Guess whose.
Now we don't intend to comment on the morality of this. (We're king of flattered that the Chivas Regal bottle should so often have the honor.)
But please don't. You're not fooling anyone. Anyone who knows Scotch, that is.
Chivas Regal is a very distinctive whiskey. many people consider it the smoothest of all Scotches.
It's made with prize Glenlivet whiskies from the oldest distillery in the Scottish highlands.
And every drop is aged 12 years.
Newcomers ask us how much training it takes to tell Chivas regal from others.
order a glass at your local bar.
Sip it, neat.
That should do the trick.