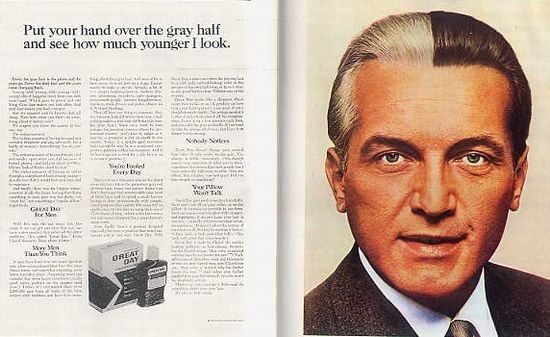 Put your hand over the gray harf
and see how much younger I look.

It's a Great Day In the Press

Everybody's playing the Great Day half-and-half game.
In Dallas, the Times Herald staff cartoonist did it with an LBJ worrying about the Bobby "popularity wave," and showing how much older his Bobby side looks. 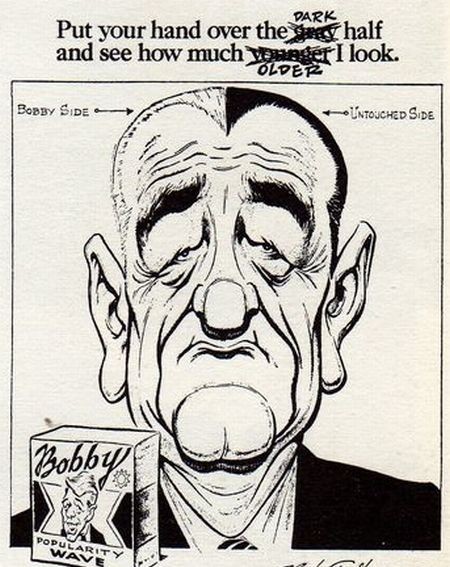 In Colorado, a Denver Post staff writer took the DDB model's picture onto the streets and interviewed women on which side they preferred. They liked the young side.
Ted Knight, the Los Angeles TV actor who is the half-and-half man in the present ads, has commented that he wished we'd stop running his picture in magazines "because I'm getting acne from having so many people put their hands on my face."

Ron Rosenfeld, copy, and Allan Buitekant, art, were the creative men who dreamed up the "Age Cut" game over a cup of coffee in Brooklyn Heights (where they both lived at the time) one Saturday afternoon.
They wanted to show the Before and After of using Great Day "without being hokey."
The assignment on Great Day was given to DDB in 1964. At the time, it seemed uncertain that there would be a market for a men's product to cover grey hair, A/E Mike Anastas said. But agency research uncovered more interest than had been suspected-including the many who bought Clairol's Loving Care "for my sister."
Baseball player Duke Snider, who did the half-and-half game for another Great Day commercial this summer, was not solicited for the campaign.
He came to us, having heard about the campaign and having decided, he said, that the time had come for him to cover his gray.
A test commercial in Jacksonville, Fla., last September created instant sales-within two weeks several of the city's large drugstores were sold out of Great Day.
National advertising, aimed at establ ishing acceptance for the idea of a man's covering his gray hair, broke on June 20.
Ted Knight, by the way, is not doomed to spend the rest of his life as the Great Day man. Upcoming ads and commercials will feature older men, younger men, professional men, white-collar workers, blue-collar workers and ... hey, you there with the white hair.