chuukyuu What kind of managerial talent do you think is necessary for a copywriter to open up his own agency?
Mr.McCabe It depends on who you open it with. If he has very good managerial talents, in a business sense, you don't need it. But you do need the ability to manage people and get good work out of them. Sometimes you can help people do what they tnemselves think they're incapable of doing. If you don't have this ability, you'd better hire only good, strong, experiencedpeople. And if you have good, strong, experienced people plus the ability to pull things out of those less experienced, then you really have got a winning situation.

chuukyuu Do you see any change in the way you make your ads after you came to own your agency, as compared with the time you were on the payroll of an agency?
Mr.McCabe  Yes, I find that I am much more unhappy with everything I do than I used to be when I worked for someone else. And I think as you get to work in better and better agencies, the same thing happens.
The better the agency, the more critical you become of your own work. So as you progress, you automatically become less satisfied with every-thing, Probably, as the work here gets better and better, I will be even less satisfied with it, which is the way it goes.

chuukyuu How did you develop your skill in copywriting?
Mr.McCabe The only way is to work for good people and be smart and just pick up everything, good and bad along the way. Then hope that you're bright enough to act on the good and discard the bad.

chuukyuu It seems that there are two types of talented copywriters. Theone who goes from one agency to another as he accumulates experiences
while the other man stays at one agency and keeps doing a good job. Are there really two such types?
Mr.McCabe There are really two such types? I have been both. Buteven before I owned my own agency I came to the conclusion that the one who stays in one agency and keeps doing a good job is probably better off. Because he has really proved something. The ones that keep umping from job to job are able to brag about the good things they did. But, they never admit to themselves the possibility that they may have left a job because they were about to fail. And I think it's a shame because if you do not give yourself a chance to fail, you can't ever really feel that you're a success.
As a matter of fact, if you get into a half way decent place I think you should turn down 20b offers for more money. If you feel that the management of your agency will give it to you when they can. Because it is much more important to have a sense of belonging to a place and a feeling of commitment than it is just to bounce around making money.
Eventually everybody will be afraid to hire you. They won't. give you any stock because they'll think you're just going to run off. You won't be in anyone place long enough to get profit sharing. And when you get to be 40 or 50 years old, you will he a nobody. Maybe a talented nobody. But still a nobody. And a poor one at that. 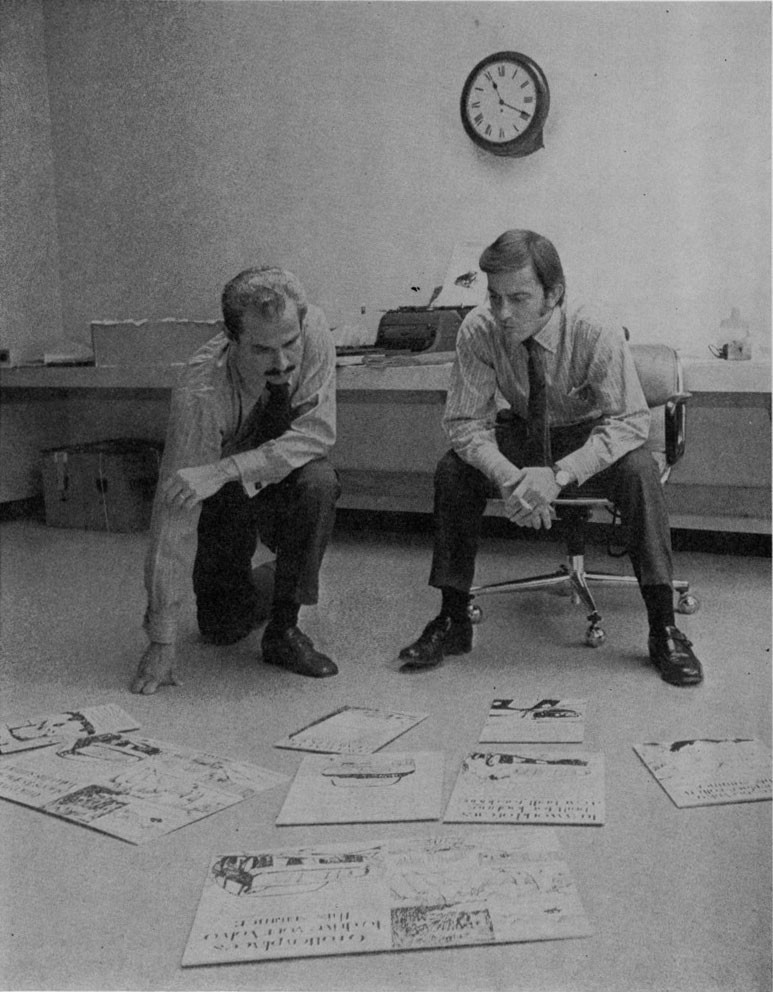 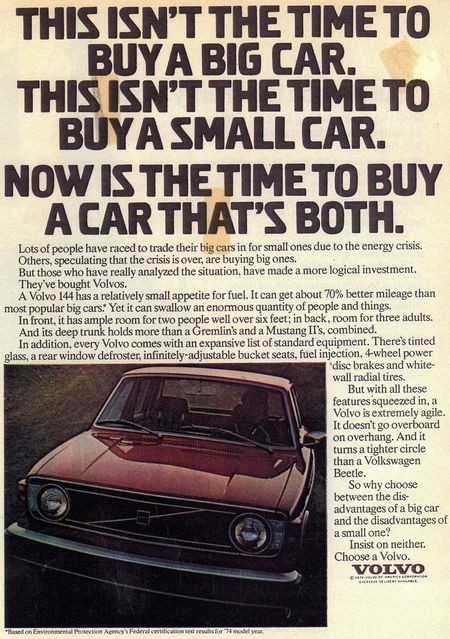 Lots of people have raced to trade their big cars in for small ones due to the energy crisis.
Others, speculating that the crisis is over, are buying big ones.
But those who have really analyzed the situation, have made a more logical investment.
They've bought Volvos. "
A Volvo 144 has a relatively small appetite for fuel. It can get about 70% better mileage than most popular big cars: Yet it can swallow an enormous quantity of people and things.
In front, it has ample room for two people well over six feet; in back, room for three adults.
And its deep trunk holds more than a Gremlin's and a Mustang II's, combined.
In addition, every Volvo comes with an expansive list of standard equipment. There's tinted glass, a rear window defroster, infinitely-adjustable bucket seats, fuel injection, 4-wheel power disc brakes and whitewall radial tires.
But with all these features squeezed in, a Volvo is extremely agile. It doesn't go overboard on overhang. And it turns a tighter circle than a Volkswagen Beetle.
So why choose between the disadvantages of a big car and the disadvantages of a small one?
Insist on neither. Choose a Volvo.