chuukyuu What is your teaching method of copywriting?
Mr.McCabe It depends on the copywriter. Some copywriters you have to be very careful with and handle very gingerly. Others you're better off going in and just telling them that what they're doing isn't good enough and they'll respond to it. It depends on personality. Some p'eople require special handling more definitely than others. And I think it is up to the supervisor to figure out what kind of person he's working with. But the biggest thing about copywriting, I think, beyond the fact that a writer should know how to write, and write well, is a trait that every copywriter should have. This is something so basic that no copywriter can 1ack it and be any good. That is logic and common sense. If someone has a high degree of common sense and then you teach him how to write, he'll be a good copywriter.

chuukyuu Do you think a trainee writer should ask for advice from experienced writers?
Mr.McCabe Obviously, it is one of the few ways they can learn.

chuukyuu How is your team-work with Mr. Scali carried out in producingads?
Mr.McCabe Well, sometimes he writes the headlines and I come up with the visuals. I guess that is about as much of a teamwork effort as you can get. I happen to be against the idea of everything having to be done by an art director and a writer together. I think that is as foolish as the old method of copywriters slipping copy under the door to art directors. Because I think this system is inclined to make writers lazy and depend too much on art directors. And I think that the really good copywriter is the guy who can sit in the office, come up with the idea all by himself, write it, without aily help from an art director, and then, if they work together, they should be able to refine it and make it even better. But the idea that a writer, has to depend on an art director and has to work with one is I think, a lot of nonsense. I think too, many people use it as a crutch for not coming up with anything. A writer sometimes will say, "Well, I haven't been able to sit down with an art director. So I haven't done anything." If a system of working prevents someone from thinking on their own, that has just got to be a bad system. 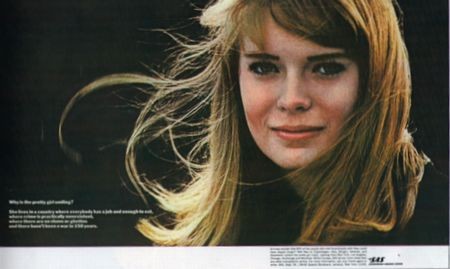 Why is the pretty girl smilling?

She lives in a country where everybody has a job and enough to eat,
where crime is pratcically nonexistant,
where there are no slums or gettos,
and there hasn't been a war in 150 years.

Is it any wonder that 80% of the people who visit Scandinavia wish they could have stayed longer? SAS flies to Copenhagen, Oslo, Bergen, Helsinki, and Stockholm (where the pretty girl lives). Leaving from New York, Los Angeles, Chicago, Anchorage and Montreal. Within Europe, SAS serves more cities than any other transatlantic airline. For more information, see YO,!Jr travel agent or write: SAS, Dept. SX, 138-02 Queens Boulevard, Jamaica, New York 11435.