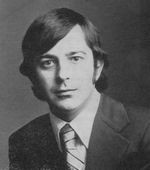 chuukyuu When was it that you established this agency?

chuukyuu How and when did you, Mr. Scali and Mr. Sloves come to know each other?

Mr.McCabe First of all, it is important to know that there were more than three of us. Five of us started the agency. Scali, McCabe, Sloves, Hultgren and Pesky. We did not need five people to start the agency. But the current trend is to start with an art director, a writer and an account man. And that is fine if you're going to be just a "creative agency" and make nice ads, but there is more to advertising than that. So one of our men was heavily involved in research and another one in the marketing of consumer packaged goods products. So we then had not only two creative people but a good account man, a marketing man and a combination research and media man, which is what an advertising agency needs anyway.

chuukyuu What made you five make up your minds to establish your own agency? Is there any episode about how you came to decide on your new start?

Mr.McCabe That is a hard one. Actually it was not my idea. I was plodding along over at Carl Ally and I was pretty happy. I had thought about it but I never had the opportunity. And actually it was Hultgren, Pesky and Sloves who had the idea. They approached me and all of a sudden there we were. There were six months of indecision and talking.

It is not something that we just jumped into. There was a lot of work and thinking involved because once you do it, you can't always say,

Let's see ...and there is an episode. After we started the agency we were in the Gotham Hotel. There were just the five of us and a secretary sitting around in the Gotham waiting for the phone to ring because we started without any accounts. And we made a secret pact that we would each jump from the hotel window one at a time, so that there'd always be someone left behind to answer the phone in case somebody called.

chuukyuu One time you were with Carl Ally Inc. When was it, and what accounts did you handle there?

Mr.McCabe I was there for three years, 1964, 1965, 1966, up until May of 1967. I handled all the accounts there except Volvo and SAS. I handled Hertz, American Home Products, Pharmacraft, Horn & Hardart, Citizens for Clean Air, Corning, Cinzano and a few others. I was Associate Copy Chief and responsible for much of the work that came out of that agency.

chuukyuu Please describe briefly your personal history up to the time you joined Carl Ally.

Mr.McCabe It is very dull and uninteresting but I worked for a lot of agencies. I started in 1954 at McCann Erickson in Chicago and worked in a few places around Chicago and came to New York in 1959. That was really when I began. I worked in a small industrial agency and then went to work for Benton & Bowles. Then Marshalk and then Young & Rubicam. I was pretty happy with Y & R and had planned to stay there, but a job at Carl Ally opened up eight months after I got there. At that time I guess I made what was maybe a more monumental decision than going into my own business. That was to take a large cut in my salary and instead of being in a big agency as a copywriter who is fairly good with clients and very well paid and comfortable, to go to a lean hungry little agency that is primarily interested in doing good creative work. At that time Ally was billing only about two million dollars. And when I left there they were billing 23 million. That was not necessarily my doing by the way. Two million to 23 million. I guess maybe I was just there accidentally at the right time and at the right place.

Mr.McCabe It was the only thing I found that I liked. It was an accident.
I never had any desire to be a copywriter until I started working in anadvertising agency. And I looked around at all the people there and I thought copywriters had the most fun. And that is why I decided I wanted to be a copywriter.

chuukyuu When and how did you come to realize that you have a talent for copywriting?

Mr.McCabe I'm still not sure. (Laughter). And sometimes I wonder more every day. (Laughter). But I guess when I did my first ad, I realized that it was not hard for me. 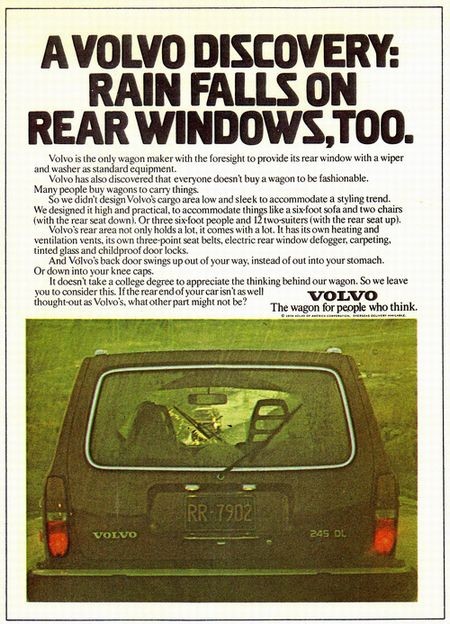 A VOLVO DISCOVERY:
RAIN FALL ON
REAR WINDOWS, TOO.

Volvo was the first wagon maker with the foresight to provide its rear window with a wiper and washer as standard equipment.
Volvo has also discovered that everyone doesn't buy a wagon to be fashionable. Many people buy wagons to carry things.
So we didn't design Volvo's cargo area low and sleek to accommodate a styling trend.
We designed it high and practical, to accommodate things like a six-foot sofa and two chairs (with the rear seat down). Or three six-foot people and 12 two-suiters (with the rear seat up).
Volvo's rear area not only holds a lot, it comes with a lot. It has its own heating and ventilation vents, its own three-point seat belts, electric rear window defogger, carpeting, tinted glass and childproof door locks.

And Volvo's back door swings up out of your way, instead of out into your stomach.
Or down into your knee caps.
It doesn't take a college degree to appreciate the thinking behind our wagon. So we leave you to consider this. Ifthe rear end of your car isn't as well thought-outas Volvo's, what other part might not be?

VOLVO
The wagon for people who think.