One violent gorilla to throw a suitcase around. That's what was needed for the visual for an American Tourister commercial, the entire audio of which goes:
"Dear clumsy bellboys brutal cab drivers ... careless doormen ... ruthless porters savage baggagemasters ... and all butterfingered luggage handlers allover the world.
Have we got a suitcase for you!"
The production company, DSI (The Directors' Studio, Inc.), sought the violent gorilla. And quickly learned that gorillas in U.S. zoos are docile, not violent - because that's the way they'retrained to be.
But a king chimpanzee billed as "very violent" was turned up in the Mexico City Zoo. That was fine, because Mexico was right for another commercial that was to be shot on the same trip - a commercial in which a car driving through a remote village overturns, Iies for 10 hours atop an American Tourister suitcase before being righted. 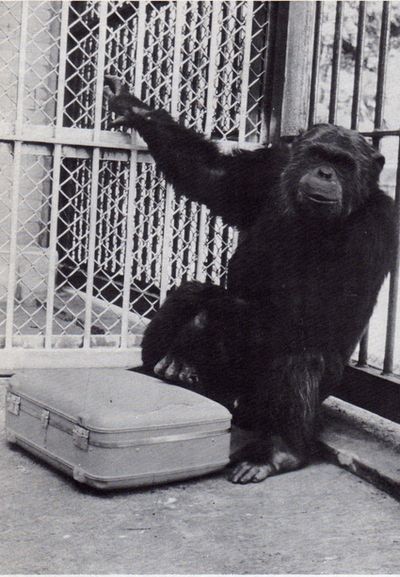 The suitcase emerges undamaged. (Based on a letter about a true experience.)
So ... the group gathers at the Mexico City Zoo to film Oofie the Chimp man-handling (ape-handling?) the luggage.
There's Roy Grace, the A/D. His wife Marcia Bell, the copywriter.
Agency Producer Susan Calhoun. Account Supervisor Si Kornblit. Director Dick Stone, Cameraman Irv Deutsch. Bob Miller of DSI serving as Production Manager. And the rest of the crew put together in Mexico.
There they are, waiting for the promised violence.
But Oofie the Chimp won't touch the suitcase.
Right at the beginning he does.
He picks up the bright red piece of luggage by the handle, eats the luggage tag, sets the suitcase down and jumps on it, then carries it into his inside cage.
He brings it back out, sets it down, and refuses to go near it.
The group waits, quietly. Nothing. Nothing and more nothing.
A zoo attendant tries to help by prodding Oofie.
Still nothing.
Oofie's food is packed, while he watches, into the suitcase in the hope that he will try to rip it apart to get at his meal.
Oofie doesn't touch the luggage.
His mate is brought to where Oofie can see her.
Perhaps he will want to show off with the suitcase for her.
Nothing.
Hours go by. Sunlight begins to fade. 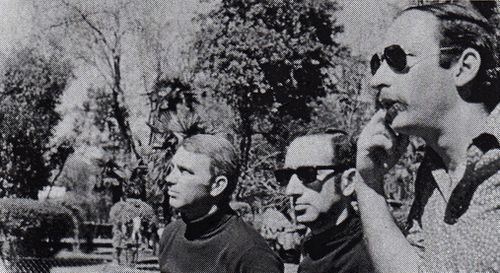 The group begins to pace.
Two hours.
Three hours.
Something very close to anxiety is surfacing.
Why doesn't Oofie behave like his own violent self?
"It was as if Oofie was holding back deliberately, to see us suffer," recalls Si Kornblit.
Anxiety is turning into desperation.
Finally, someone shoves the su itcase at Oofie and for no special reason, Oofie shoves it back.
The tense group spontaneously breaks into a cheer.
Oofie is so excited by the cheer that he stomps on the suitcase.
Louder cheers. Oofie, even more excited, hurls the luggage against the bars of the cage. 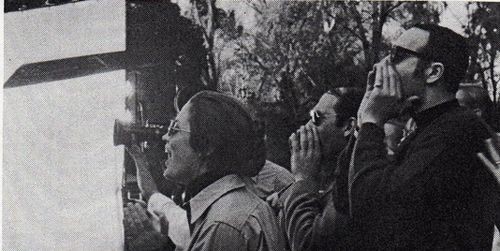 From that point on, it's a snap.
The group knows Oofie's trigger and how to set it off.
Every time the camera is ready to roll, the group yells "Oofie" - and the cheers throw Oofie into a frenzy of performance.
"Oofie is 25 years old now," says Susan Calhoun. "But until the age of five he was a circus chimp. He hadn't done any of his circus routines for an audience in 20 years. But apparently when we started to cheer, he remembered the circus things and he did
them all - it was as if he was going through everything he knew hoping to hit on whatever it was we wanted him to do.
It was really a little sad.
"But when we left, we let him keep the suitcase to play with.
That made him happy."

P.S. The suitcase wasn't broken, either.