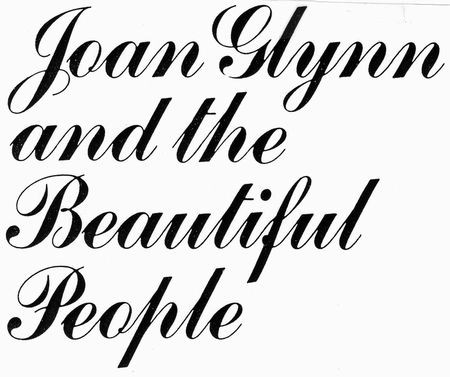 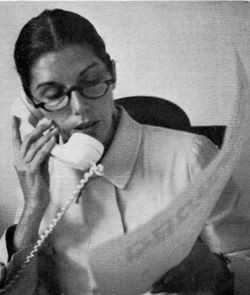 The lady has a cool sophistication, a quietly "with it" calm that is awesome.
She is that exceptional paradox−a committed career woman who has never lost her femininity.
Or as one aide puts it, "a business machine who is at the same time a real human being."
Joan Glynn has been in the business world since graduation from Manhattanville College in 1942.
And from Executive Trainee at B. Altman & Co., to Retail Stylist with Simplicity Patterns, to Editor of GLAMOUR magazine, to Vice President and Head of DDB's Product Styling Department, the climb has been steadily up, up, up.
You get the Impression, in talking with Mrs. Glynn, that the alternative of being a housewife has never even occurred
to her. "I think that time has long since passed," she says.
"It was another generation that stayed at home cooking and arranging flowers."
Joan Glynn exercises a lot of power. As Head of Product Styling, she runs a uniquely unusual operation−the only one of its kind in the advertising world.
And beyond that, she is one of a handful I of people in America who are the pacesetters and arbiters of contemporary mass tastes. 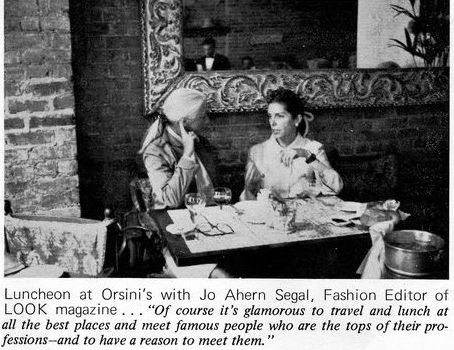 It was she, for example, who designed the American Airlines stewardess outfits that helped to start the trend away from uniforms to the costumed designer look. "I think that's the project I'm proudest of," she says, "because it's alive. Every time I get on an airplane I can see the idea in action. It's kind of like having a book you've written that's still around and being talked about."
What began 15 years ago, with just two people Francesca Kilpatrick as Fashion Director and Joan Glynn as her assistant−has since grown into a highly specialized 21−person, all-women department, with Joan Glynn at its head. ("Kind of like running St.Trinian's girls school," she quips.)
Certain key people carry out specialized functions.
Mary Lou Sullivan, for example, scouts and hires all the models for DDB print commercials.
Dianne Carr is in charge of propping all agency commercials.
Mary Lee Thune is the textile and fabric expert.
Kathy Jolowicz is the consultant on furniture and interior design.
Ann Dries is a home economist whose expertise is sought in all food commercials.
Rosemarie Fay heads a group of fashion stylists. 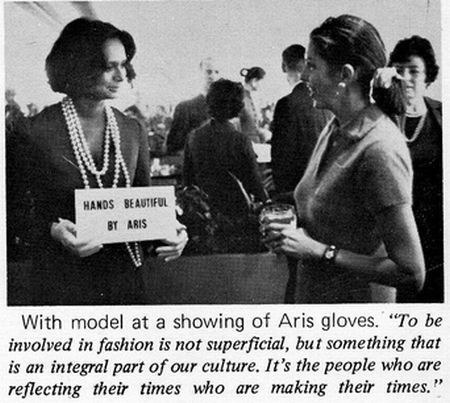 And Irene Beckman, who might best be described as Mrs.Glynn's right hand and protegee, is responsible for the design and execution of a multitude of new product concepts.
"It's logical, I think, that DDB --- a company which has pioneered creatively in so many areas−should be the first to sponsor something like this," says Mrs.Glynn. "It's kind of a 'think tank' for styling and product development ideas."

But there's more. A lot of Mrs.Glynn's job is advisory.
If, for example, a DDB's client wants to introduce a new low cost stocking, Mrs.Glynn will be called in to advise not only on the feasibility of the new product, but also to suggest possible marketing and packaging techniques.
Or, as very often happens, Mrs. Glynn may send one of her staff out to cover a new showing of, let's say, Italian furniture design.
From the sketches that are brought back-perhaps of a steamer trunk−she may come up with an idea for a new kind of hope chest, or on a smaller scale−a jewelry box, which could be manufactured by one of DDB's clients.
Another day may find Mrs. Glynn in a bull session with a group of account supervisors, trying to find a way to put more it into a tired account.
Perhaps a flatware company can improve their sales by capitalizing on the international aspects of their promotional campaign. Mrs.
Glynn suggests that they sponsor an international design competition and come up with new patterns from around the world.
In a job like this one, everything counts.
Even friendships that have been built up over the years with famous people.
She may be called upon to line up a series of celebrity testimonials to promote a new product−
Or, as happened the day I was there, a celebrity may contact her. In this case it was a world−famous ballerina offering to do a one-hour television special, because, as she said, she needed "a million dollars fast."
Mrs.Glynn's job?
Find a sponsor.
There are those who might consider all this involvement with fashion and the "Beautiful I People and the various trends of what's "in" and what's "out" as very superficial.
Mrs.Glynn has a different opinion.
"Fashions or styles have always been a reflection of the philosophy of each generation," she says. "Therefore to be involved in fashion is not superficial, but something that is an integral part of our culture.
It's the people who are reflecting their times who are making their times.
And I'm delighted to be a part of that group."
Then she concludes with womanly candor, "Of course it's glamorous to travel and lunch at all the best places and meet famous people who are at the tops of their professions−and to have a reason to meet them, and to be able to exchange ideas with them."
But staying in that group means keeping abreast of the total market at all times−a task which can be both
consuming and difficult.
It means reading international publications of every type and description daily.
It means extensive traveling (to Chicago, New Orleans, Acapulco, London, Paris, Rome, Greece, Israel−last year alone) in order to keep up with the latest in art, furniture, clothes, accessories, plays, films, boutiques, restaurants−in short, life-style-around the world.
How does a woman like this find time, much less the energy for a husband and four school−age children?
Explains one long-time associate, "She's extremely well organized.
Everything in her life is well arranged, even the children---girl, boy, girl, boy."
Or, as Joan Glynn herself puts it, "1 think women who ramble around all day don't have any more time with their children than I do. When babies are little, they sleep all day. When they're small children they want to play with their friends, not with their mother.
And when they're in school, well, they're in school all day.
The important time you spend with them is evenings and weekends.
And I still have something left to give then because I have a lot of energy−an accelerated metabolism, you might say. 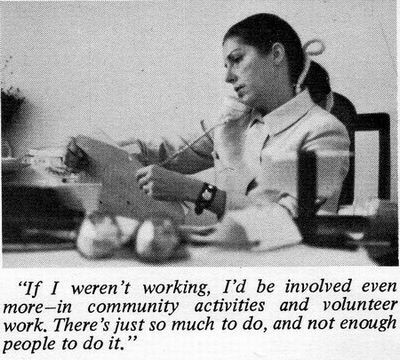 I can sleep anywhere. Ninety per cent of the time I can get a seat on the train and catch a half hour's sleep, or read."
Then, looking momentarily vexed, "if I don't get a seat, just think of all that time I waste!"
The disciplined family background shows through−again.
"1 hated it," she admits, "but I guess inevitably I turned out the same way~maybe a bit moderated with my own children."
And how does she keep up her health? "On one vitamin pill a day... and a deep interest in what I'm doing.
I guess that's really what keeps me going."
Then she turns serious.
"If I weren't working I'd be involved even more−in community activities and volunteer work.
There's just much to do, and not enough people to do it."
And maybe there we have the clue to what motivates Mary Joan Glynn, the energetic lady with all the built-in calm-there's just so much to do, and not enough people to do it.