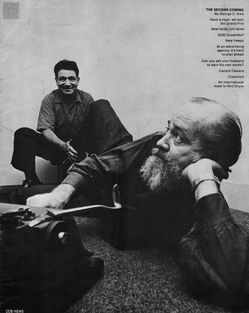 It was that over for 40 years ago, I became intimate with creators of DDB, and visited their offics. A shoeshine man, Frank that had turned similarly freely round their office. It was a kind of official recognition though it was neither an employee, it was nor a non-regular employee, and it was a shoeshine man of free-lance.
It went when was in Len sirowitz's office, it was Len said"He is customer from Japan, and served", and Frank polished my shoes by chance.
Is the counterplan divided, and has work decreased because the sneaker becomes popular unpleasant now?

When I returned to Doyle Dane Bernbach, it shattered the morale of many people.
They remembered me well, and they said, "Tom, how long were you away? About a year?"
"Over three and a half years," I said.
"That long? My God! I'm getting old."
Men who had until then considered themselves in the prime of Iife suddenly felt frai I and bent as they real ized that the grave was staring at them over my shoulder.
Frank the Shoeshine Man was glad to see me, though. He caught me on my first day back, a Tuesday.

"Where you been, kid? I was looking allover for you."
"Frank, I just started today."
"Today? You were supposed to start last Friday."
Frahk's sources of information have always been better than mine, so I didn't argue with him. "Are your shines still l5¢, Frank?"
"15¢! La Traviata! I don't go back that far. Sit down, you need a shine.
"How were things out there?" Frank asked. "You didn't like it at Benton & Bowles. How's Wells, Rich, Greene?"
"Terrible, Frank. Shines there were 75¢."
"La Forza del Destino!" Frank screamed.

"Please shine the other shoe, too, Frank. I was only kidding."
"Did you like it at J. Walter Thompson?" he asked.
"1 never got to J. Walter Thompson, Frank."
"Sure you did. You were there with Ronnie."
"No I wasn't, Frank."
I wished I had been though. Because as a result, Frank gave me a very listless shoeshine. It was obvious he was mulling over the mystery of who could have supplied him with such misinformation.
After Frank, things could only go downhill. And they did.

One of those vice-presidents met me in the hall and said,
"What are you doing here, George?"
"I re-enlisted."
"But I heard you were going with Case and Krone, George."
"That's a wild rumor I started three weeks ago, but I never figured anyone was idiotic enough to bel ieve it."
"Please go with them, George," he said.
I suppose I should have asked Frank the Shoeshine Manwhere my office was. Instead, I asked Leon Meadow.
"George, we don't have a place for you yet. But something will turn up... someone will be out shooting, or on vacation... we'll find an empty office."
Trying to be helpful, I said, "Leon, I understand Bernbach's out of town."
"George, why don't you just hang around the halls and the water cooler like you used to. When I want to, I'll find you. Just like I used to."

So for several days I floated around, operating out of an Ohrbach's shopping bag I kept in Sachi Tasaka's office. For three days I was in one office, for a day and a half in another, and so it went. Of all the places I occupied, the most interesting
was a non-office: the end of the hallway where Leon Meadow's secretary normally sits. The phone calls there were the most intrigu ing.
"Hello, this is. Mary Anne Penelope Cabbage. I wanted to ask Mr. Meadow if I could pick up my portfolio."
"He lost it," I said and hung up.
Of course, anything was a vast improvement over aplace I'll refer to as Bumblebee & Bumblebee, since their reception room wallpaper was covered with little bees. They clocked you in at 9: 15 and clocked you out at 5: 15. I didn't spend much time there, and I'm not referring to my six-month stay because that seemed like a very long time indeed. I would set out for the office in all good faith. But once I saw I was going to be ten minutes late, I was too shy to draw attention to my tardiness,
so I would call in sick. They understood. Lots of people there were sick.
But just to keep my hand in the game, I occasionally did an ad there and they would say, "This is a different place. You can't do ads the way Doyle Dane Bernbach does."
"That's no big news," I said. "Doyle, Dane, Bernbach and
others too numerous to mention used to tell me the same thing."Later I put in some time at another place, and might be
there sti II had they not suggested I go to lunch and not come
back. Then I wrote my daughter in college that I had returned
to Doyle Dane Bernbach. does it feel to be home, Mr. S. Claus? For a joke, should I write Mother Superior and apply for your vacated job?"
"Joanie," I wrote, "I'd sooner see you on the street first. In fact, after two weeks, that's where you'd probably. end up anyway."

My daughter doesn't really think of me as Santa Claus. Especially since I avoided telling her about Santa Claus until she was 14, even though I did save a lot of money that way.
But back in the early 60's-this decade's, not mine-my office nameplate was mysteriously removed one December and replaced with a more appropriate one in joyful Yuletide script that read S. CLAUS. It remained there for years. Lost messengers
would pop into my office and say, "Pardon me, Mr. Claus, but where is Ken Duskin's office?" A DDB secretary once asked me, "Why do people call you GEORGE when your first initial is S?"
And proud fathers would bring their little children to my office during the Christmas season and say, "This is Santa's office. See the sign on the door? See the funny man with the dirty gray beard?"
"Where is his red suit?" they would whisper.
"See his red nose," they would say.
"Ho! Ho! Ho!" I would chuckle at my hypocritical jolliest.
"What goodies do you want me to bring you, little man? A wonderful set of drums so you can entertain your parents? A real live pony? A super $800 electric train? A nice shiny gun that shoots real bullets?"
"Daddy!" they would jump up and down with excitement.
"Am I really going to get all those things?"
"Shut up! I'll take you to Stern's and you can see the nice Santa Claus."
Well, everyone knows what happened to Stern's. And here I am, still around.
And likely to remain. I've got a few good years ahead of me. They sure as hell aren't behind me. And I'll be able to tell when it's time to go. All copywriters can. Because first your fingers start to go. Like Mickey Mantle and his legs. Sure, you can still type, knock out an ad now and then. But as the year goes on, your joints stiffen, your nails shatter, and your fingers don't bounce back from a long day at the typewriter. Then you know it's time to pack it in.
That's when I'll (TO BE CONTINUED).