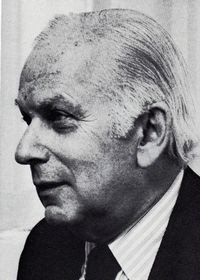 INTERVIEWER: Do you think it will be different when you eventually retire?

BERNBACH: No I don't. I think the idea is too strong here, and the pool of talent too deep for there to be a difference. Even
now much of what I used to do is being handled by the Bob Levensons, the Marvin Honigs, the Mike Manganos, the John Nobles. And just consider what it means in an agency and to upcoming creative people to have the talents of and to be able to
learn from-people like Bob and Phyllis, David Reider, Helmut, Bill Taubin, Lester Feldman, Jack Dillon, Bert Steinhauser, and on and on.

INTERVIEWER: I assume you feel there is a constant supply of young talent out there to draw from in the future, and for the people you have named to teach.

BERNBACH: Yes, and I think we do them a service because while we encourage them always to seek fresh ways, we make sure they're on the right track insofar as what they say, so that their talent will not be diffused on approaches that are
entertaining but irrelevant. I think it was George Bernard Shaw who said, "You say something better if you have something to say."
And while we're on the subject of what you say, I'd like to add something about how you say it. I do not think that vulgarity automatically renders an ad ineffective, or that good taste insures that it will be effective. An ad can be vulgar but alive and forcefuland therefore work. Or an ad can be in good taste and be dull and stupid and ineffective.
However, if your ad is vital and alive and sells the product and is also in good taste, you will have accomplished something else.
You will have done a public relations job for the company by getting the public to like that company as well as to buy its
product. Why miss out on that kind of opportunity?
And when you have advertising that is tal ked about because it's liked, it is good also for the creative people who did it. They respond to recognition and to praise and to awards. And I'm all for recogn ition and for awards for the creative person.

INTERVIEWER: Are there things about success that you don't like?

BERNBACH: Occasionally we find that someone who has been here is not growing with his job, is no longer right for the job, and yet it is someone that we have known and like very much as a person. Still it can be wrong to keep the person on because perhaps he would do far better and go further in another company. It's a great responsibility having to make that kind of
decision.
Or another kind of decision. Where we might have a big client who, we come to realize, is not really right for us. There are too many conflicts, too many areas of disagreement, and perhaps it would be better to resign the account. Yet if we do, it will mean less income and therefore we will necessarily have to let some people go. That too is a very great responsibility.
So those are two of the things that I dislike.