Protas I took myself off the Ohrbach's account in December 1968.

chuukyuu How long had you been writing for Ohrbach's ?

Protas Since...let's see, 1951? That's longer than I've let myself remember!
For a good many years Bill Bernbach and Bob Gage did all the concepts. As a matter of fact, the Cat ad, which is very famous as you know, was their concept; my contribution was the body copy. 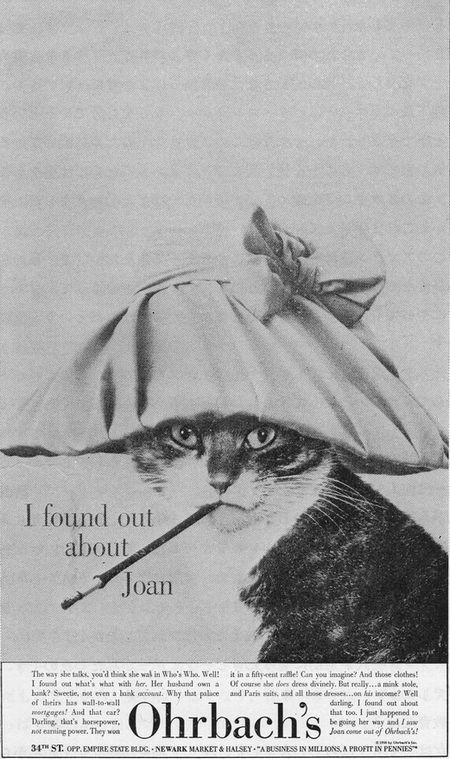 I found out about Joan

The way she talks, you'd think she was in Who's Who. Well! I found out What's what ewith her. Her husband own a bank? Sweetie? not even a bank account. Why that palace of their has wall-to-wall mortgages! And that car? Daring, that's horsepower, not earning power. They won it in fifty-cent raffle! Can you imagine? And those clothes!
Of course she does dress divinely---a mink stole, and Paris suite, and all those dresses---on his income? Well daring, I found out about that too. I just happened to be going her way and I saw Joan come out of Ohrbach's!

Gradually as the account grew and as Bill Bernbach's time became more crowded, he gave me more and more responsibility and I began to do the ads from scratch.

chuukyuu Did you feel stagnant on the account? Was that the problem?

Protas It wasn't so mush a matter of getting tired of Ohrbach's. It became an increasingly complex job, a really enormous account. The store began pushing a great many departments for which it never had done ads before. It became more than one person could handle.
Now; I had a choice of directions; I could either set up a group, ask for more copywriters, give some of the smaller jobs to them and keep the good things, the delightful things, the subway posters and institutional ads for myself, which would have been unfair to the juniors. Or I could do what it was time for me to do in the long run anyway, which was to ask to be relieved of the account. It wasn't the easiest decision' I was associated with Ohrbach's, my name meant something, but it was time for a fresh team.
The institutional stuff that's coming out today is very exciting and has, in fact, been mopping up prizes. The store I'm sure is enormously pleased and I know the agency is, too.

chuukyuu When you first joined DDB, what was the size of the agency? How many copywriters were there?

Protas I first joined DDB ill the year one literally. DDB was a year old. I came in 1950 and there was only one copywriter before me. My bones creak when I think of it.

chuukyuu At that time, who directly taught you to write?

Protas I was the first copywriter Phyllis Robinson hired. She way my copy chief.

chuukyuu What was her teaching method?

Protas She was absolutely marvelous. She tried to bring me out, to remi'nd me that copy is not a question of writing cute stuff but of selling hard and being fresh while you sell, she kept me to the point, refused to let me go off into detours; she taught by correcting goofs rather than by setting rigid principles.
She was an excellent teacher, and I'm delighted to see her around as often as I do, now that we're as big as we are.