chuukyuu I think you're currently working for American Airline. Will you answer a few questions about this account? First, I guess this account came to DDB in 1960 or 1961. Did you start on it from the beginning?

Mr. Dillon I'm not currently working for American Airline. I was on the account for five and half years and got off a year ago. I couldn't think of any more airplane ads.
I think the account came to the agency in 1961. I didn't work on it at first. I believe it was 1962 when I started on American.
chuukyuu Had you worked on it by yourself or with others?
Mr. Dillon I always had other writers in the group. I started as an assistant copy supervisor. David Reider was the supervisor. We had four or five copywriters and any number of art director. I don't recall exactly how many.
It seemed to vary a little from month to month. I think about six month later I was made the supervisor.
chuukyuu Were there any peculiar problem to this account?
Mr. Dillon They had the same problems that all big airlines have. Airlines have to do two or three advertising jobs at the same time. The first is to create an image for themselves that the public will accept and believe in. All other things being equal, the right image for an airline will be the thing that influences passengers.
The second job is one of the more grinding aspects airline advertising. Airlines are constantly adding flights or changing their schedules. You have to get this news into the newspapers and on radio and television two or three weeks ahead of time, to send these new flight off with paying passengers aboard. American Flies to about 50 cities, so producing ads like this quite a job. Keeping so many ads of this sort interesting, of course, makes the job that much harder.
The third ploblem is to find difference between you client and other airline. The industry is tightly regulated by the government. The routes they fly must be approved by the government. The fares they charge must be approved by the government, No airline can offer a new fare and surprise their competition. The application for a new fare is nothing you can keep secret. Your competitors know about it and will simply offer the same fare on any given route.
This leaves matters of service. The way customers are treated, the convenience of your schedule, and any technical innovation that are peculiar to your airline are the thing that determine what you can say to separate American from TWA and United. 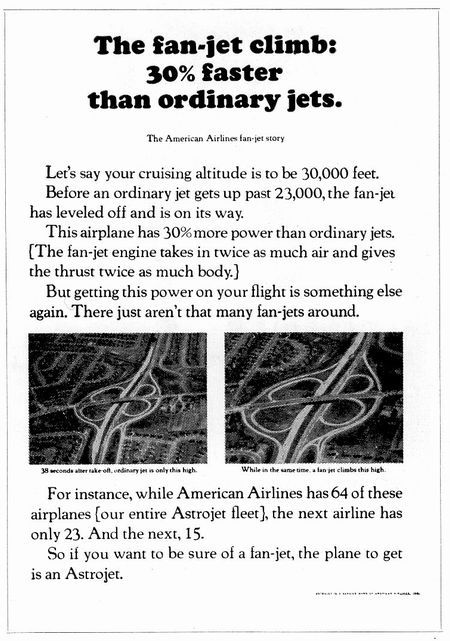 Take-fan-jet engines. The fan-jet has about 30% more power than original jet engines airline first came out with. American converted its entire fleet to fan-jet. We ran a campaign on this for two years. American was the only major airline to do it and I think it was probably the best campaign they ever had.
There was time when you had to which airline ads for anything that might possibly frighten people. This was a sticky area, In a campaign that began before I got on the account, we stressed the maintenance and care we gave our planes. It must have been a good campaign because it reassured me every time I flew. But you had to be very careful how you did it. In automobile ads for instance, you can talk about the way seat belt make driving safer, You can't come out and say this in airline ads. Safety figures for commercial airline are fantastic, but the fact remains that a plane will occasionaly go down, In the middle of our maintenance campaign there was a crash in Jamaica Bay. That was 8 years ago and I don't think American's had a major crash since, but you still can't talk about safety.