Hopes, Not Fears, For Cancer Campaign

One of the most famous public-service campaign slogans of them all has been retired.
"Fight cancer with a check-up and a check" has served as the theme of the American Cancer Society's annual spring fund-raising drive for years and years-the ACS itself isn't certain how many.

But when the ACS asked DDB to do its 1971 campaign advertising, and Bill Bernbach said yes, the Society was ready and eager for a new theme.
"The old slogan was just a pleasant play on words," notes Copywriter Lore Parker.
"It had been pulled out of a speech someone made years ago. They felt, and we agreed, that they needed something more powerful for today. Something that really said what the Society stands for."

There was something else the ACS wanted changed from past campaigns: instead of using scare tactics (which they felt turned people off), they wanted a campaign that would speak of hope ...of goals and of achievements.
DDB couldn't have agreed more.
And the agency people on the account-AID Bill Taubin, Lore, Account Men Arie Kopelman, Joe O'Donnell and Grant Robertslearned that there was much to be optimistic about.
(Note: DDB's work for the ACS is strictly for its fund-raising campaign, and has no bearing on the Society's anticigaret advertising, which DOES use scare tactics and very effectively.)
Bill and Lore went to work on concepts.
What they sought was a way of motivating people to give all the $1 and $2 contributions that make up the bulk of the Society's funds.
A way of saying This ad was done especially for the business press. Grant Roberts, Joe O'Donnell and Arie Kopelman-who lent their names to the "firm" -were the account men for the Cancer campaign.

George Parker is husband of Copywriter Lore Parker; he's not superstitious.
"We're close ... your dollar can help us over the top."
They thought about the words that had launched the U.S. space program-President Kennedy's commitment in 1961 to put a man on the moon by the end of the decade.
Mightn't the final push in cancer research be launched with a phrase such as "We want to find a cure for cancer by 1975"?
Objections by the ACS. First of all, the word "cure" was wrong in the context.
Some cancer IS being cured today, by surgery and by drugs.
As for specifying a date-1975, by which cancer would finally be conquered totally, the ACS declined to commit itself.
"We want to wipe out cancer in your lifetime," suggested Lore. Fine, said the ACS.
And that's the new theme.

Getting approval on the body copy was tougher-at least on the ads that describe progress in cancer tests and possible cures. "We kept being told 'The Medical Board would never let us say that."

So we asked for, and received, permission to present the copy to the ACS's Medical Board ourselves," Bill and Lore related, "and we argued every point with them.
We had to persuade them that the way you write when you're motivating people to give money is different from the way you write for a scientific journal.
That was the biggest battle we fought and the one we're most proud of."
In the course of these discussions, Bill and Lore learned about a 19-year-old boy who had contracted acute leukemia when he was 13, and had been given six weeks to live.
He was one of the first to be given a new form of drug treatment, paid for with cancer research funds.
Today, six years later, Mike is alive and well and buzzes around on a motorcycle like any normal 19-year-old might.

It is just possiblethat he can be considered "cured."
How about doing a commercial using him to tell his story?
Horrors, said the board.
One doesn't use patients in commercials.
Undaunted, the DDBers went in search of Mike's doctor, who had no objection to a commercial with and about Mike.
He sent them to Mike's mother, who had no objection.
She introduced them to Mike, who would LOVE to make a commercial, thank you very much.
And he did, with Justin Crasto producing.
The ACS thinks it's great, and Mike and Justin have become close friends.
The ACS is now thinking about getting Mike onto some TV talk shows to help promote the fundraising drive. 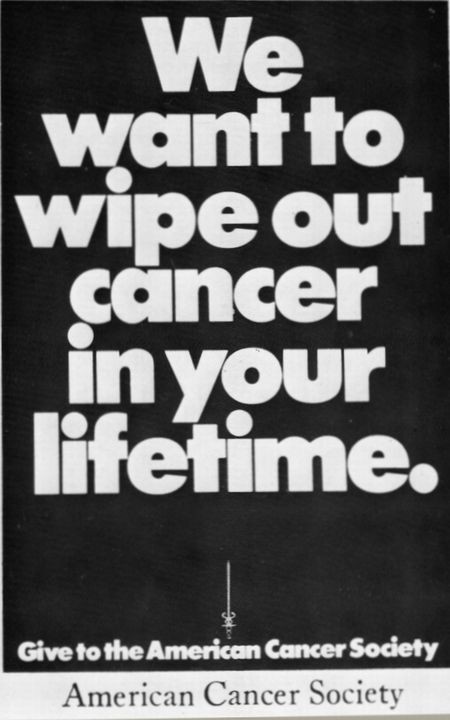 There's also a commercial starring John Wayne. Wayne, in the course of a routine check-up several years ago, was found to have lung cancer.

It was discovered in time for surgery to be effective.
"He was, of course, happy to make this commercial for nothing.
"So was everyone else who donated time, talent, etc. to the campaign.
One commercial that didn't get approval for production was a kind of "The Day We're Working For" idea.
It would be filmed to look like a medical meeting at which it is announced that the final cure for cancer has been found.

"It was killed because it was 'too convincing',"

Lore explained. "Even if we supered 'A Dramatization' on the screen, there might be people who would believe it was an actual news report, just as people thought Orson Welles' 'War of the Worlds' was really happ ening."
Already the ACS has been promised the equivalent of $4 million in air time for the commercials during April, May and June-the months of its drive.
Print ads are scheduled for 2500 issues of consumer and business magazines, with a combined
circulation of nearly 700 million.
A lot of time and space. Hopefully, it will bring in a lot of dollars, to help wipe out cancer in your lifetime.