chuukyuu Would you please tell me the reason why you are saying in San Francisco?

Mr. Gossage The reason I'm staying in San Francisco in because I can't think of any reason to leave. In 1946 I came here after the War. I'd been in the pacific for three, four years and I liked San Francisco better than where I'd lived. It's a charming place. So I stayed here. And San Francisco is one of those misty places, though it's not always exciting place.

chuukyuu If you are in Los Angeles or in New York, is it possible to make your agency bigger?

Mr. Gossage I can make my agency bigger any where, but the whole trivk is to remain small and do what you can do. I don't want to make it any bigger. Also, one advantage to being in Sa Francisco, Which isn't a big advertising city, is that all of my client are somewhere else like New York or Europe (on in Japan). People are prepared to believe what I tell them more if I don't see them too often. It works out very well.

chuukyuu I believe small agencies are more lively than big agencies and they are not so automatical at all. But---

Mr. Gossage Yes, I think it's true enough. In a big advertising agency, if anything lively come out, It's because somebody in there has set up a little enclave of his own and he will create a lot of activity and people will leave him alone because they don't know where he's doing. And then gradually what will happen is the other clients notice the good work what this little kingdom is doing, and I think the whole agency does. But they will try to make a formula of what these people do and pretty soon, it's not magical any more. And so everything become ordinary.

chuukyuu Would you please explain to me the main reason why you determined to become a copywriter?

Mr. Gossage I didn't determine to become a copywriter. I quit my job−−−I'd been promotion manager of a broadcasting station and I went to Europe for year and a half and did graduate work at the University of Paris when I was 35,36 years old.
When I came back I needed a job and I went into advertising agency whose job was only open for a copywriter, so I said "OK". That was the only job I could get.

chuukyuu Have you any advices to young copywriters?

Mr. Gossage What I tell to young copywriters is this: If they go to work in an agency, what they ought to do is to look around for some account place which nobody cares about and will allow them to do anything they want to, And they will have surely learned great deal, because nobody tell them no.

chuukyuu Please tell the most important quality for a copywriter. How can we train it? 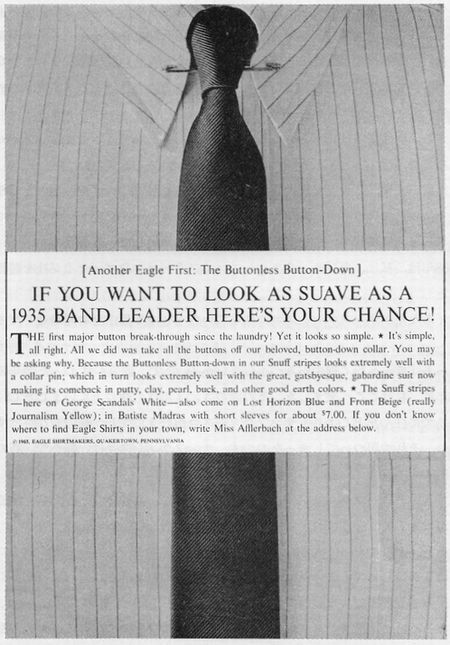 IF YOU WANT TO LOOK AS SUAVE AS A 1935 BAND LEADER HERE'S YOUR CHANCE!

chuukyuu Is there any episode or background story for Prof. Marshall McLuhan when you promoted him?

Mr. Gossage Marshall McLuhan is one of the most important thinkers of our time. When I read his book "Understanding Media", it must be about 4 years ago(1964), I was very impressed by it. So an associate of mine, Dr.Gerald Mason Feigen, and I went to Toronto where he is a professor at the University of Toronto and met him. And I told him that I thought his time had arrived. I was tried to be explaining to people about his theories and thought that he would become very famous very rapidly. And I thought we could help him a little bit and the chief thing that we could do was to expose him to the world. So I took him down to New York. This was about three and half years ago. And we had a cocktail party for him and invited the foremost editors and publishers in New York. They assigned writers and it happened at just the right time and everybody wrote about him and in six months he was a household name. Of course, he would have become famous anyway, but it might have taken longer. We then invited him to a seminar right here in this office and Tom Wolf and other writers came out and covered it. We paid for everything ourselves, for bringing him and his wife here to San Francisco. Why? JUST BECAUSE WE WANTED TO DO IT.