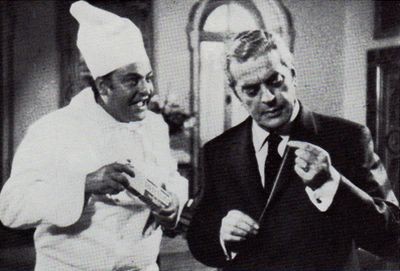 I guess "Buitoni himself" still has a warm spot in my Italian heart and the first spaghetti
commercial in the campaign is still my favorite.
Carol Anne Fine, the writer, and I had the job of selling spaghetti, frozen pizzas, and
sauces; the most difficult being the spaghetti, which cost twice as much as the competition.
We decided not to hide the cost but to tell the people it was more expensive because it was
a better product and to unify the campaign with a character called Count Buitoni.
We were sure we couldn't find the elegant Italian to play Buitoni in New York so we went to Italy to cast and shoot.
We found an actor that looked perfect but unfortunately spoke no English.
After 450 or so takes, the 30-second spot went something like this, the/chef tells Buitoni
about all the wonderful ingredients in the spaghetti and Buitoni just says "Good, Good."
Then the chef tells Buitoni "but because it's got so much good stuff in it, they have to charge
more.
" Buitoni answers with a smile "FANTASTIC."
Then came the super IF IT COST LESS ITS NOT AS GOOD AS BUITONI.
When people around town started saying to each other "Good, Good, Fantastic," we knew
we had a winner.

An interview with Mrs.Carole Anne Fine