Mr.Meadow Ilike most are one, a commercial for the French Government Tourist Office.
The TV commercial is called Monument. It deals with some of the very famous places in France, It attempts to take the viewer's point of view and actually makes him a part of the seen he is viewing. To be more specific, we open the commercial as the camera glides down the famous Hall of Mirrors Versailles. The narrator say;"Walk the mirrored hall of Versailles, were Madam Pompadoul once danced." We then go to Chartres and we "kneel in the famous cathedrals where once greatprinces knelt" and so forth through the experience kf Joan of Are etc. to finally windine up with the Arc de Triomphe. It is a beautifully filmed bit of the visual splendor of France, presented with the invitation to relive the splendor youself and to be a participant at the spots where so many great things happened. 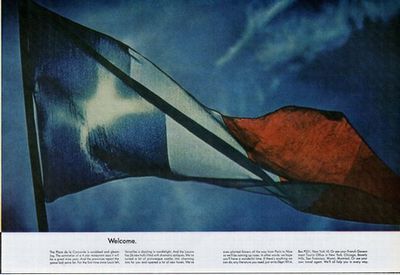 The Place de la Concord is scrubbed and gleaming. The sommelier of a 4 star restaurant says it will be a great win year. And the provinces report the geese lokk extra fat. For the first time since Louis left Versailles is dazzling in candlelight. And the Louvre has 26 new halls filled with dramtic antiques. We've turned a lot of picturesque castles into charming inns for you and opened a lot of new hotels. We've even planted flowers all the way from Paris to Nice so we'll be coming up roses. In other words, we hope you'll have a wondwefull time. 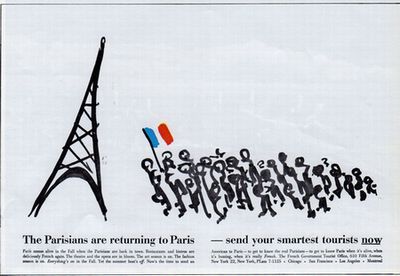 Parisians are returning to Paris −−send your smartest tourists now

Paris comes alive in the Fall when the Parisians are back in town. Restaurants and bistros are deliciously French again. The theatre and the opera are in bloom. The art season is on. The fashion season is on. Everything's on in the Fall. Yet the summer heat's off. Now's the time to send an American to Paris−−to get to know the real Parisians−−to get to know Paris when it's alive, when it's really French. 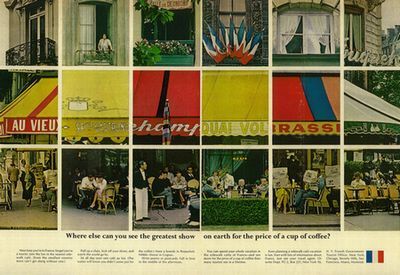 Where else can you see the greatest show on earth for the price of cup of coffee?

Next time you're in France, forget you're a tourist. Join the fun the nearest side-walk cafe.（Ｅven the smallest country town can't get along without one.）
Pull up a chair, kick off your shoes, and watch the world go by.
Sit all day over one cafe au lait.(The waiter will know you didn't come just for the coffee.)
Have a brandy in Roquetort. Nibble cheese in Cognac.
Write poetry or postcards. Falin love in the middle of aftermoon. 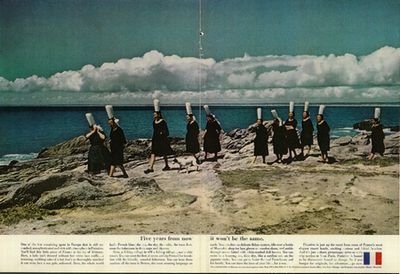 Five years from now it won't be the same.

One of the few remaining spots in Europe that is still un touched, unsophisticated and rich with atmosphere is Finistere,.
You'll find this little piece of France at the top Brittany. Here, a lady isn't dressed without her white lace coiffe---a towering wedding cake of a hat that's so thoroughly starched it can even face a sea gale, unbowed. Here, the whole bword worjd looks French blue: the sea, the sky, the cafes, the tuna fleet, even the fishermen in their caps and blouse.
Here, a fishing village is still a fishing village--- not a chic resort. You can meet the fleet at seven and sip Pernod for break-fast with the friendly, muscled fishermen. You can hear them auction off the tuna in Breton, the most amusing language on earth. You can dine on delicate Belon oysters, idle over a bottle of Muscadet, shop for lace gloves or wooden shoes, and amble through towns dotted with white-washed doll houses. You can swim in foaming sea, then dry, like a sardine net, on the gigantic rocks. You can get to know the real Frenchman and his family. You can have the time of your life---for a sou.
Finistere is just up the coast from some of France's most elegant resort hotels, exciting casinos and bikini beaches. And it's just a short, picturesque drive or train trip northwest from Paris. Finistere is bound to be discovered, bound to change. So if you hunger for originals, for adventure---go now.

chuukyuu What are the most important remarks of Mr.Bernbach on the subject of advertising?

Mr.Meadow I would say that I agree with so with so many of Mr.Bernbach's remarks on the philosophy and methodology of advertising that will be very hard to single out one or two. However if I have to, I would say that his contention that advertising is persuasion and that persuasion is not a science, but is art, is the among the thing that have impressed me most deeply about his philosophy. I say this because it pits modern research in its proper place. It is a useful tool, but it is only a tool and it is not the end product in the creation of advertisement. If you grant that an advertising must persuade in order to be successful, then you must also grant that the creative process is the key to this things. And no amount of research, or scientific technology will teach a human being how to persuade. Persuasion is a combination of emotion and logic and sometimes of ill-logic but it is always a personal communication between people. And such cannot be anything else but art. 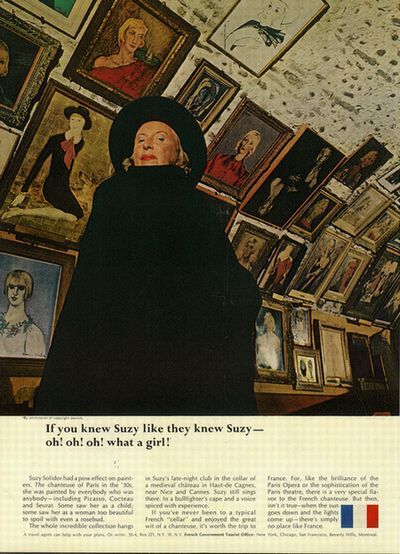 Suzy Solidor had a pow effect on painters. The chanteuse of Paris in the '30s, she was painted by everybody who was anybody---including Picasso, Cocteau and Seurat. Some saw her as a child, some saw her as a woman too beautiful to spoil with even a rosebud.
The whole incredible collection hangs in Suzy's late- night club in the cellar of a medieval chateau in Haut-de Cagnes, near Nice and Cannes. Suzy still sings there. In a bullfighter's caps and a voice spiced with experience.
If you've never been to a typical French "cellar" and enjoyed the great wit of a chanteuse, it's worth the trip to France. For, like the brilliance of the Paris Opera or the sophistication of the Paris theatre, there is a very special flavor to the French chanteuse. But then, isn't it tree−−when the sun goes down and the light comes up−−there's simply no place like France.

chuukyuu In hiring a new copywriter what do you check at Doyle Dane Bernback?

Mr.Meadow In hiring new copywriters, whether they are experienced seniors or raw trainees, we look for the pretty much of tha same basic qualities, imagination, freshness in approach, strength in selling concepts and, above all things, as I have mentioned before, believability in carrying out the concept,

Of course this is easier to spot in a seasoned writer than it would be in a trainee. On the other hand, trainees must be selected with perhaps more consideration and care and selectivity than even so called senior writers, This may seen like a strange statement but when you analyze other reasons behind that, you will see how much sense it makes.
The trainee to us represents very little investment of money since his salary is quite low to start with.
But he does represent a tremendous investment in the time of the supervisor to whom he is assigned because he is completely new for the most part.
His work must be gone over and carefully discussed at great length. And a tremendous amount time in general must be put against actually bringing him up from the level of trainee through junior to senior writer.

This time on the part of the supervisor dose not come cheaply since our supervisors are well paid.
Therefore to invest in the one or two or three years which it takes to bring a trainee out of this classification into a more advanced one and then to find out that the trainee does not come out to the original potential that he showed when we hired him, is to throw away a lot of money ad time.
So in a normal course of events, we exercise tremendous care and take on but very few trainees just those whom we think have a great potential for development.

As far as experienced writers are concerned we hire them in the usual way by looking carefully at their sample books, by checking their previous work experiences and by using the general yardsticks that are employed for determining the creative value of writers and art directors.
Often we find that when they are too senior in their careers, they may have developed certain approaches to advertising problem and styles of writing which do not allow then the flexibility of doing it our way. In that case we must very carefully avoid hiring them. 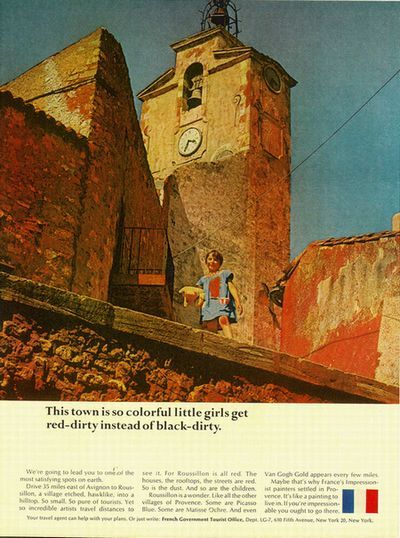 This town is so colorful little girl get
red-dorty instead of black-dorty.

We're going to lead you to one of the most satisfying spots on earth.
Drive 35 miles east of Avignon to Roussillon, a village etched, hawklike, into a hilltop. So small. So pure of tourist. Yet so incredible artists travel distances to see it. For Roussillon is all red. The houses, the rooftops. the streets are red. So is the dust. And so are the children.
Roussillon is a wonder. Like all the other villages of Provence. Some are Picasso Blue. Some are Matisse Ochre. And even Van Gogh Gold appears every few miles.
Maybe that's why France's impressionist painters settled in Provence. It's like a painting live in. If you're impressionable you ought to go there.

chuukyuu What do you think about the future of the advertising business?

Mr.Meadow The most difficult question.
The advertising business will continue to expand as American business expands.
I see no reason for the dimunition of either in the immediate future.
As far as techniques are concerned, I am sure that they will change.
I am sufficiently old so that I go back into my own youth and remember what we were doing in advertising before the World War II and how it seemed then filled with advertising slogans and promises and exaggerations and overstatements and how these techniques seemed to be part and parcel of the business.
And yet shortly after the World War II Bernbach and David Ogilvy came along and demonstrated that you could turn the whole business upside down and given a fresh new start.
I dare say that in the foresee of future, a new Bernbach or a new Ogilvy will do the same to current scene.