My favorite ad is "For What?"
I feel that almost everything I've learned as a copywriter went into the writing of this ad.
Len Sirowitz and I did it as a volunteer effort in the early hours of the McCarthy movement.
When the ad appeared in the New York Times, it had an electrifying effect.
Letters and money poured in from allover the country; $23,000 in cash from this one insertionalone. When the ad was run again in the Times several weeks later, it brought in $28,000 in cash.
The ad went up on bulletin boards of colleges all over the country, and I think it played a significant role in getting college kids to go out and work for Senator McCarthy in the history-making New Hampshire primary.
Ultimately, "For What?" ran in newspapers all over\ the country. Hundreds of thousands of copies were distributed as handbills, and it was even carried as a sign in anti-Vietnam demonstrations.
What more could a copywriter ask of an ad? 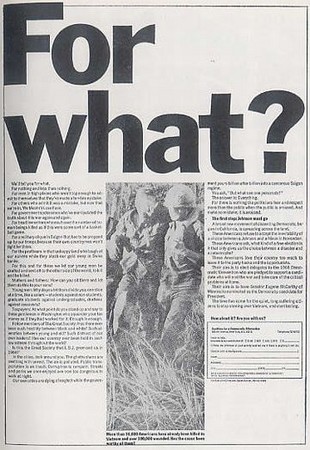 We'll tell you for what.
For nothing and less than nothing.
For men in high places who aren't big enough to admit to themselves that they've made a terrible mistake.
For others who admit it was a mistake, but now that we're in, We Mustn't Lose Face.
For government spokesmen who've manipulated the truth about this war again and again.
For headline writers who exultoverthe number of human beings killed as if this were some sort of a basket-ball game.
For a military clique in Saigon that has to be propped up by our troops because their own countrymen won't
fight for them.
For the profiteers in that unhappy land who laugh at our naivete while they stash our gold away in Swiss banks.
For this and for these we let our young men be drafted and sent off to the other side ofthe world, to kill and be killed.
Mothers and fathers: How can you sit there and let them do this to your sons?
Young men: Why do you let them divide you, one slice at a time, like a salami--students against non-students,
graduate students against undergraduates, draftees against reservists?
Taxpayers: At what point do you stand up and say to these gentlemen in Washington who squander your tax·money as if they had worked for it: Enough is enough.
Fellow members of The Great Society: Has there ever been such hostility between black and white? Such alienation between young and old? Such distrust of our own leaders? Has our country ever been held in such
low esteem throughout the world?
Is this the Great Society that L.B.J. promised us in 1964?"
In the cities, look around you. The ghetto slums are seething with unrest. The air is polluted. Public trans-
portation is an insult. Corruption is rampant. Streets and parks we once enjoyed are now too dangerous to walk at night.
Our own cities are dying of neglect while the government pours billion after billion into a cancerous Saigon
regime.
You ask, "But what can one person do?"
The answeris: Everything.
For there is nothing the politicians fear and respect more than the public when the public is aroused. And make no mistake; it is aroused.
The first step: Johnson must go
Abroad new movement of dissenting Democrats, be gun in California, is spreading across the land.
These Americans refuse to accept the inevitability of a choice between a Johnson and a Nixon in November.
These Americans ask, what kind of a free ejection is it that only gives us the choice between a disaster and a catastrophe?
These Americans love their country too much to leave it to the party hacks and the opportunists.
Their aim is to elect delegate to the 1968 Democratic Convention who are pledged to support a candidate
who will end the war and take care of the critical problems at home.
Their aim is to have Senator Eugene McCarthy of Minnesota nominated as the Democratic candidate for President.
The time has come for the quiet, long-suffering citizens to stop stewing over Vietnam, and start boiling.

Of all the ads I've done, this is one of my favorites because I was able to see cause and effect so directly.
A letter I received in September of 1967 tells the story:

"Dear Mr. Steinhauser:
"I was gratified to learn of your personal initiatives to secu re passage of the Rat Extermination Bill.
"Your timely and imaginative advertisement must surely have played an important part in persuading the Congress of the necessity for this vital legislation.
"AII who will benefit from it join in my thanks to you and Mr. Kollewe.
"Sincerely. Lyndon B. Johnson."

>>The copy of the letter 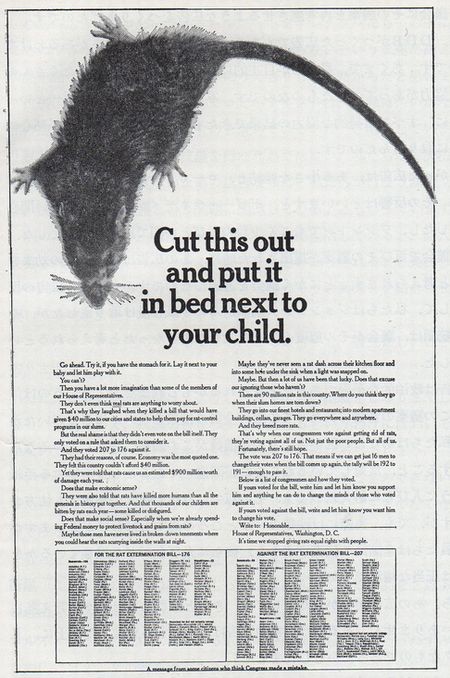 Cut this out and put it in bed next to your child.

Go ahead. Try it, if you have the stomach for it. Lay it next to your baby and 1et him play with it.
You can't?
Then you have a lot more imagination than some of the members of our House of Representatives.
They don't even think real rats are anything to worry about.
That's why they laughed when they killed a bill that would have give $ 40 million to our cities and states to help them pay for rat-control programs in our slums.
But the real shame is that they didn't even vote. on the bill itself. They only voted on a rule that asked them to consider it.
And they voted 207 to 176 against it.
They had their reasons, of course, Economy was the most quoted one. They felt this country couldn't, afford $40 million.
Yet they were told that rats cause us an estimated $900 million worth of damage each year.
Dose that make economic sense?
They were also told that rats have killed more human than all the general in history put together. And that thousands of our children are bitten each year---some killed or dish gured.
Does that make social sense? Especially when we're already spending Federal money to protect livestock and gains from rats?
Maybe those men have never lived in broken-down tenements where you could hear the rats screening inside the walls at night.
Maybe they've never seen a rat dash across their kitchen floor and into some hide under the sink when a light was snapped on.
Maybe. But then a lot of us have been that lucky. Does that excuse our ignoring those who haven't?
There are 90 million rats in this country. Where do you think they go where when their slum homes are torn down?
They go into our finest hotels and restaurants, into modern apartment buildings, cellars, garages. They go everywhere and anywhere.
And they breed more rats.
That's, why when our congressmen vote against getting and of rats, they're voting against all of us. Not just the poor people. But all of us.
Fortunately, there’s still hope.
The vote was 207 to 176. That means if we can get just 16 men to change their votes when the bill comes up again, the tally will 192 to 191--- enough to pass it.
Below is a list of congressmen and how they voted.
If yours voted for the bill, write him and let him know you support him and anything he can do to change the minds of those who voted against it.
If yours voted against the bill write and let him know you want him to change his vote.
Write to: Honorable ____________________________
House of Representatives, Washington. D.C.
It's time: we stopped giving rats equal rights with people.