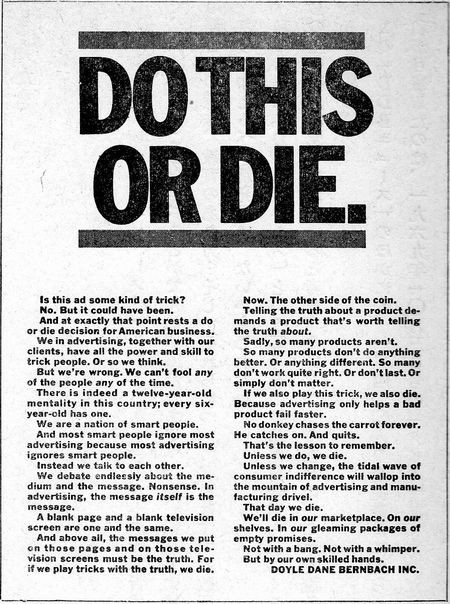 DO THIS
OR DIE.

Is this ad some kind of trick?
No. But it could have been.
And at exactly that point rests a do or die decision for American business.
We in advertising, together with our clients, have all the power and skill to trick people.
Or so we think.
But we're wrong. We can't fool any of the people any of the time.
There is indeed a twelve-year-old mentality in this country; every six-year-old has one.
We are a nation of smart people.
And most smart people ignore most advertising because most advertising ignores smart people.
Instead we talk to each other.
We debate endlessly about the medium and the message.
Nonsense.
In advertising, the message itself is the message.
A blank page and a blank television screen are one and the same.
And above all, the messages we put on those pages and on those television screens must be the truth.
For if we play tricks with the truth, we die.
Now. The other side of the coin.
Telling the truth about a product demands a product that's worth telling the truth about.
Sadly, so many products aren't.
So many products don't do anything better.
Or anything different.
So many don't work quite right.
Or don't last.
Or simply don't matter.
If we also play this trick, we also die.
Because advertising only helps a bad product fail faster.
No donkey chases the carrot forever.
He catches on. And quits.
That's the lesson to remember.
Unless we do, we die.
Unless we change, the tidal wave of consumer indifference will wallop into the mountain of advertising and manu facturing drivel.
That day we die.
We'll die in our marketplace.
On our shelves.
In our gleaming packages of empty promises.
Not with a bang.
Not with a whimper.
But by our own skilled hands.

Some quotes from letters received by the agency on the "Do This or Die" ad in the Oct. 3 issue of Time Magazine:
"Excellent!" - a vice president of Ohio Bell Telephone Co.

"Your ad is one of the most profound statements I've ever seen from an advertising agency or from anyone else in our
business. Thank you for having the courage to say it." - a magazine publisher in Boston.

" ... It's the best net/net of common sense in our so-called sophisticated advertising/marketing business that I have ever read " - the marketing manager of a major corporation.

" ... This is a pretty gutsy message from Mad. Ave. types, even though Doyle Dane Bernbach is one of the mostunconventional in the business. Are reprints available? Perhap selective placing of a few on this campus might add to the education of our students, many of whom have rigid stereotypes against involvement in business or industry ... " assistant to the president of a California college.

"This is an ad one indifferent consumer is NOT indifferent to. My heartiest thanks, and a loud Amen! to all your statements." a Missouri housewife.

"Bull's-eye! Your ad hit me as a member of the 'community as a whole: one cif your intended objectives. Your message comes along like a tonic fresh breeze"... a California man.

Creative team on the ad was Bob Levenson and Len Sirowitz.