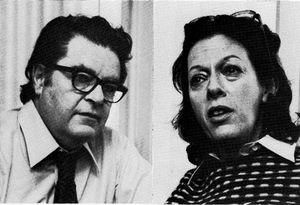 INTERVIEWER: You two have been working together for 25 years.

ROBINSON: More, because we worked together at the other agency.

INTERVIEWER: Has your way of working together changed in that time?

ROBINSON: Each of us has grown up in his own way, but baseically it's very much tha same. We can move very fast now because we've been through so much together. We can discard very easily and get moving on a problem very quickly.

GAGE: It's easier now. Because when you... you know, you always have to work with somebody that you can throw a corny idea at. Bill threw out so many corny ideas at me it was unbelievable, and I threw them out to him. And Phyllis has thrown corny ideas to me and I've thrown them to her. If you don't have the trust of one another, you can't work with one another. If the other person says, "That's terrible," and you don't get up and walk out of the room angry, then you know you can work with them. thoughts in your own mind before you speak them. If you work with somebody new, they might come up with 27 bad ideas and tell you all of them. Now this is a terrific waste of time. Whereas when I'm sitting with Phyll is these ideas are running through her head, and she's thjnking, "This stinks," "This is lousy," "This is pretty good." So she comes out with one out of ten. Same way with me. So you can work very quickly that way.
In that way it's simpler,.. But in another way it's more difficult.
We've kind of used up the United States in commercials. You see so many commercials with people running through fields, walking through the woods... to get new images becomes more difficult.