chuukyuu Please tell us the episodes or background stories concerning these campaigns.

Mr.Elgort Let's begin with the Give a Damn Campaign. To understand its, background, you have to understand the mood of New York City in the Spring of 1968.
A lot of people were afraid. The Watts and Detroit riots were still fresh in their minds.
Newark was too close for comfort. Washington, D.C. was just waiting to happen.
There was talk of vigilante groups forming in white neighborhoods.
Retailers were reporting increases in gun and ammunition sales, people didn't know what to do.
But they all wanted to do something. So a Priest started leading weekend work forces from the suburbs into Harlem to help the people of the neighborhood clean up vacant lots and put fresh paint on their door stoops. And a Rabbi walked into the heart of East New York to try to make contact with the Mafia and ask their help in keeping the area cool.
What's more he actually got them to help.
The time was right for the Give a Damn campaign.
It matched the mood of the city-the anger, the worry, the empathy-and it gave it some direction.
It tried to make the word "ghetto" mean something more to people than "riot". It tried to force them to think of the real problems there.
We went about the job the wa we would do any other. We set objectives, we wrote a strategy. But before we could do any of that we had to go out into the ghettos of New York and get some facts.
Statistics can take you only so far on a job like this. We had to go out and talk to the people first-hand and find out what their problems were.
Then try to figure out what advertising, of all things, could do about them. We spent about a week talking to people. Not nearly enough time, but we had to work fast.
A kid in the ghetto had asked us, "Doesn't anybody out there give a damn?" And that's what we decided our message had to be. But a couple of networks had some other ideas.
One said that "damn" was a bad word that might set a bad precedent for advertisers. (When we asked why they had advertised the motion picture "Damn Yankees," as their evening movie one week, they explained that that was a creative work. That depressed us for days.)
Another network ran the commercials. One little thing they did was to delete the "damn". That's right.
They ended our commercials with "Give jobs... give money ...give a bleep."
It frustrated the hell out of us. We knew our advertising talked tough.
But then advertising never tackled this tough a problem before. So we did everything possible to break through the resistance. It took us a month to do it.
We had to enlist the support of the F.C.C., the N.A.B. Code Authority and Vice President Humphrey himself, who had telegramoed the Mayor asking permission to use our theme for the campaign of the President's Council for Youth Opportunity. Once we cracked the media, though, they released a flow of advertising that totaled some $2, 250, 000 worth of free time and space by all media. And that was in New York City only in a mere two months. 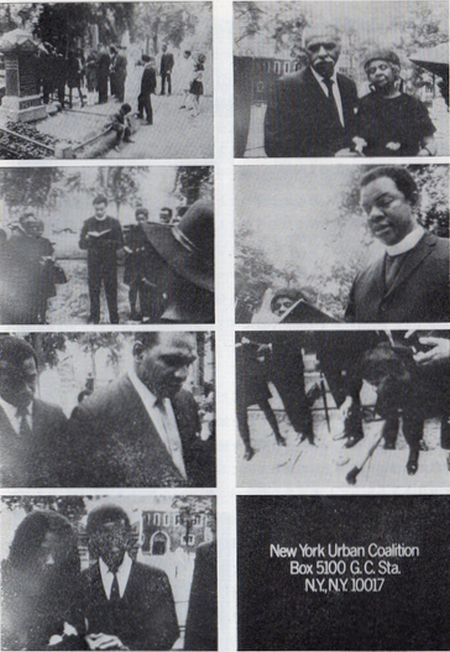 The New York Urban Coalition
"Give a Damn" campaign "Funeral"