<<An interview with Mr.Alvin Hampel(1)

chuukyuu In the United States, generally, what route does one pursue for a career as a copywriter?

Mr.Hampel I would say that there is no really formalized  training for copywriting.
My advice to a young person in college would be to load up on liberal arts courses, maybe become an English major, learn how to put words on paper. Learn how to express yourself in writing but after that you must try very hard to get a job at any level and at any kind of place that does advertising whether that be a retail store, or a tiny agency, or any place that will let you sit down and write copy.
I think that's the only way I would suggest, and the only way I know. Now, there are schools that teach copy and things like that.
I don't think they're very effective. You must learn by doing it, by writing. That's the best way.

chuukyuu How did you yourself become a copywriter?

Mr.Hampel I decided in college. This is a rare thing. Not many people do this. In college, I decided I wanted to write advertising copy. I was writing columns for the newspaper. I was on the college newspaper, and I thought advertising would be the best place for me to apply this writing ability and make the most money and be successful. The idea of a combination of selling and writing appealed to me because I was also involved at the time, part-time, as a men's clothing salesman.
Advertising really is a combination of selling and writing. And so I thought that maybe I wanted to go into it from my college days. And I went right into it. My first job was in a little agency in New Jersey where I lived at the time. They gave me $ 30 a week and led meto believe I was very lucky.

chuukyuu Where were you born?

Mr.Hampel In Paterson, New Jersey. It was once the silk city of the world. We wove most of the raw silk produced in Japan.

chuukyuu Did you graduate from college?

chuukyuu You got a BA?

Mr.Hampel I got a BS in Marketing-and I took a lot of advertising courses. Most people today don't take advertising or major in it in college but as I said, I knew even then that I wanted to work in advertising.
If I had to do it over, I would major in English or literature, or liberal arts. I don't think you can teach this business in college. You can expose people to it, you can tell them what it's about, you can maybe interest them in it, but you don't really become a copywriter by taking a copy course in colleg, you know.

chuukyuu What was your father's occupation?

Mr.Hampel My father was and still is a textile man. He works as a silk weaver in Paterson.

chuukyuu Your kind of job is obviously different than your father's occupation.

Mr.Hampel Yes, obviously. He is a blue-collar worker.

chuukyuu How did you manage this?

Mr.Hampel I had a Jewish mother. A Jewish mother is like having a rocket booster on your tail. She wanted me to rise above their situation. You see, I came from fairly poor circumstances. And there was a premium put on education in our family and my mother made sure I got it. She made it very clear that she would be very unhappy if I didn't excel and so I went on to be a good student in school and I applied myself and I guess a little bit has to be innate talent.

chuukyuu It is your mother who gave you impetus.

Mr.Hampel She not only gave me impetus but a terrific right hook too when I misbehaved.

chuukyuu Well, right now, I think you should be grateful, yes?

Mr.Hampel I'm very happy and my parents are too. As a matter of fact, they get a lot of pleasure out of the good things that are happening, you know. Whenever one of my commercials is scheduled to appear on TV, she still calls up friends and relatives and tells them to watch what her son does for a living. Which accounts for the high viewer (Neilsen) ratings for all the shows which run my commercials.

Mr.Hampel Yes, I always liked writing. I always had a knack for it and I always got good grades in it. I also had a sense of humor, they told me, and so I always used to like to write funny things. As a matter of fact, most of fact, most of the commercials that I've been involved with, many of the things that I have done have been on the humorous side. I became known as a writer os humorous television commercials.

chuukyuu When you were a boy, what kinds of novels did you like best?

Mr.Hampel I used to like adventure novels; I used to like Hemingway, I liked Jack London also: I used to read so much, I used to go to the library as a kid and bring home stacks of books. I was a nonathletic boy, while the other kids were playing ball, I was reading. I read everything I could get. I used to read the encyclopedia, too. 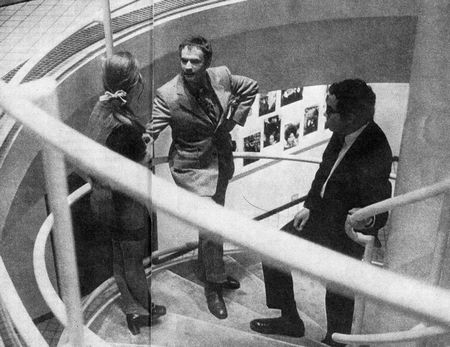