<<An interview with Mr.Edward McCabe (1)

chuukyuu Among your works so far done, please name two that you like best, and also please tell us why you like them and some episode concerning these two ads.
Mr.McCabe Two of the things I like best were done while working for someone else. That is not to say I am not happy with anything that I have done here or I do not think it is. good. I think it is.
I just have a good feeling about these: First would be Citizens for Clean Air, an ad that I did with the headline, "Tomorrow morning when you get up, take a nice deep breath. It'll make you feel
rotten." First I just think it's a good ad. And second, probably more important, it represented one of the few opportunities someone in advertising gets to do something that is really important. You can get excited about so-and-so toothpaste. But you can never get as excited about it as the idea of cleaning up the air and improving people's health. That's why I like that one. 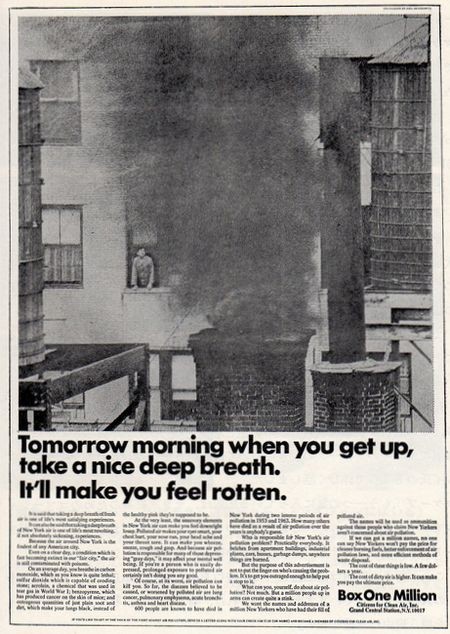 Tomorrow mornihg when you get up,
take a nice deep breath.
It'll makeyou feel rotten.

It is said thal taking a deep breather fresh air is one of life's most satisfying experiences.
It can also be said that taking a deep brcath of New York air is one of life's most revolting, if not absolutely sickening, experiences.
Because the air around New York is the foulest of any Americam city.
Even on a clear day, a condition which is fast bccoining extinct in our "fair city," the air is still contaminaled with poisons.
On an average day, you breathe in carbon monoxide, which as you know is quite lcthal; sulfur dioxide tear gas in World War I; benzopyrene, which has produced cancer on the skin of mice; and outrageous quantities, of just plain soot and dirt, which make your lungs black, instead of the healthy pink they're supposed to be.
At the very least. the unsavory elements in New York air can make you feel downright lousy. Polluted air makes your eyes smart, your chest hurt. your nose run, your headache and your throt sore. It can make you wheeze, sneeze, cough and gasp. And because air pollution is responsible for many of those depressing "gray days," it may affect your mental well being. If you're a person who is easily
depressed, prolonged exposure to polluted air certainly isn't doing you any good.
Of course, at its worst, air pollution can kill you. So far, the diseases believed to be caused, or worsened by polluted air are lung cancer, pulmonary emphysema, acute bronch it is, asthma and heart disease.
600 people are known to have died in New York during two intense periods of air pollutionin 1953 and 1963. How many others have died as a result of air pollution over the years is anybody's guess.
Who is responsible for New York's air pollution problem? Practically everybody. It belches from apartment buildings, industrial plants, cars, busses, garbage dumps, anywhere things are burned.
But the purpose of this advertisement is not to put the finger on who's causing the probelem. It's to get you outraged enough to help put a stop to it.
What can you, yourself, do about air pollution? Not much. But a million people up in arms can create quite a stink.
We want the names and addresses of a million New Yorkers who have had their fill of polluted air.
The names will be used as ammunition against those people who claim New Yorkers aren't concerned about air pollution.
If we can get a million names, no one can say New Yorkers won't pay the price for cleaner burning fuels, better enforcement of air pollution laws, and more efficient methods of waste disposal.
The cost of these things is low. Afew dollars a year?.
The cost or dirty air is higher. It can make you pay the ultimate price.