For the ambitious Greek, pharmaceutical advertising reached too parochial an audience. Lois wanted action on the consumer front.
After a year he was hired by Bob Gage at Doyle Dane Bernbach. During his one year in Bill Bernbach's creative paradise, he won three gold medals in the annual competition of the New York Art Directors Club for his work on Volkswagen, Chemstrand, and for Goodman's Matzos, a campaign he sold by threatening to jump from a third story window, climaxed by his heraldic cry, "You make the matzoh, I'll make the ads!"
In 1960. at age twenty-eight. he left Bernbach's agency to become co-founder of Papert, Koenig, Lois. Although DDB had been on the scene for a dozen years by then, and had become the ad agency for Polaroid, Volkswagen, Chemstrand and other auspicious advertisers, this first creative agency was perceived by the Madison Avenue establishment as a freak, if not the freak, in the business. When Lois left DDB to start PKL, he was bucking a stone wall of skepticism. Madison Avenue's conventional wisdom in 1960 allowed for only one "creative" ad agency in America. 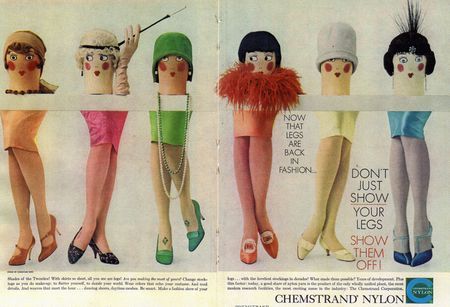 Now, that legs are back in fashion.
Don't just show your legs.
Show them off.


Shades of the Twenties! With skirts so short, all you see are legs! Are you making the most of yours? Change stockings as you do make-up: to flatter yourself, to dazzle your world. Wear colors that echo your costume. And mad details. And weaves that meet the hour ... dancing sheers, daytime meshes. Be smart. Make a fashion show of your legs ... with the loveliest stockings in decades! What made them possible? Years of development. Plus this :factor: today, a good share of nylon yarn is the product of the only wholly unified plamt, the most modern : research facilities, the most exciting name in the industry: The Chemstrand Corporation. 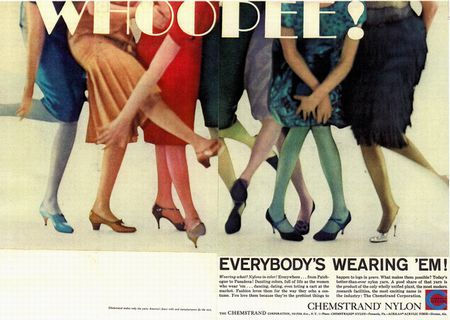 Wearing what? Nylons in color! Everywhere ... from Patchogue to Pasadena! Dazzling colors, full of life as the women who wear 'em ... dancing, dating, even toting a cart at the market. Fashion loves them for the way they echo a costume. You love them because they're the prettiest things to happen to legs in years. What makes them possible? Tody's better-than-ever nylon yarn. A good share of that yarn is the product of the only wholly unified plant, the most modern research facilities, the most exciting name in the industry: The Chemstrand Corporation.